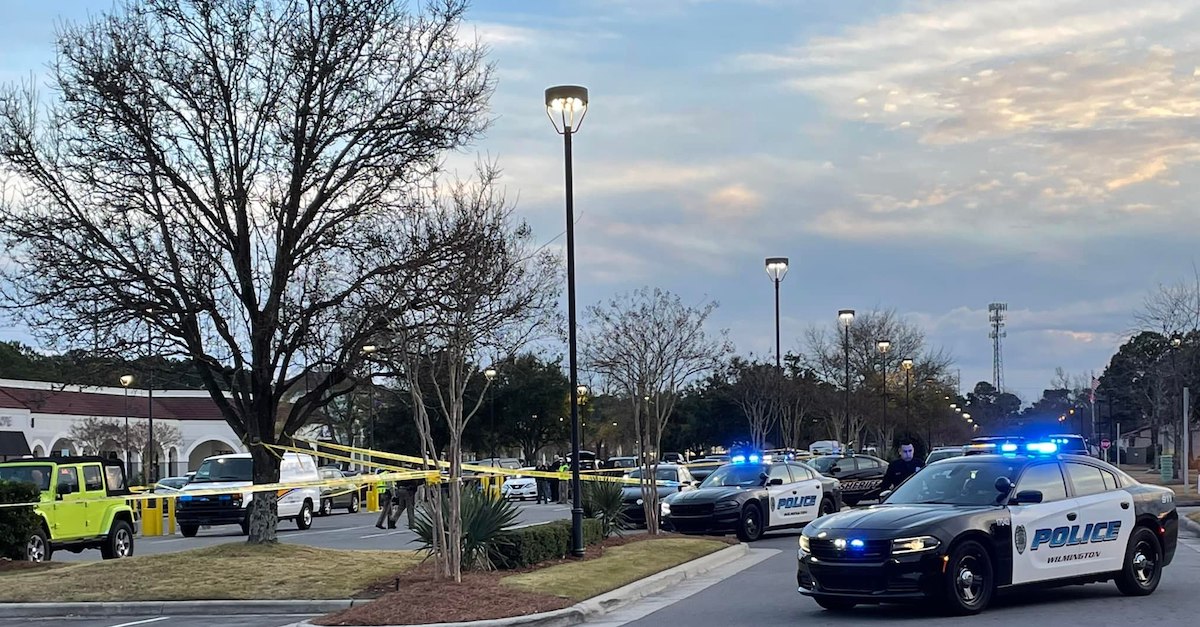 The scene outside of the Landfall Shopping Center in Wilmington, N.C. where Wilbert Lamont Robinson allegedly gunned down three members of his family

A man in North Carolina was arrested over the weekend after he allegedly murdered his own mother, sister, and son, fatally shooting all three in broad daylight in front of a shopping center.

Wilbert Lamont Robinson, 40, was taken into custody on Saturday and charged with three counts of first-degree murder and discharging a firearm into an occupied vehicle, the Wilmington Police Department said.

According to the department, WPD officers on Saturday responded to emergency calls concerning calls about shots fired at approximately 4 p.m. in the parking lot of the Landfall Shopping Center located on Military Cutoff Road. Upon arriving at the scene, first responders reportedly found two adult females and one juvenile male seated inside of a vehicle — all of them appearing to have suffered gunshot wounds.

Cops said all three victims were pronounced dead at the scene.

Officers said they also found an injured Wilbert Robinson at the scene. The suspect had reportedly shot himself. Emergency Medical Services medics transported the suspect to the New Hanover Regional Medical Center for treatment prior to charging him for allegedly killing his family members.

In the immediate aftermath of the shootings, the department released a statement indicating the familial nature of the incident, saying it planned to “eventually release all family aspects of this homicide” and noted that “notifications have been made more difficult because of the family relationship of the suspect to the victims.”

“We know there are a lot of questions about what took place here today and our intentions are to be transparent and release as much information as we can while, at the same time being respectful and seeking justice for our victim,” Wilmington Police Chief Donny Williams told the media Saturday evening.

Several hours later, the department identified the victims as Robinson’s 65-year-old mother Diretta Marie Robinson, the suspect’s 48-year-old sister Trina Lynnette Robinson, and his 13-year-old son, whose name was not disclosed because he is a juvenile. All of the victims as well as the alleged shooter are from Hampstead.

“This is a very unfortunate and tragic incident and our hearts and thoughts go out to the family and friends that are impacted by this,” Chief Williams said following the incident.

Police said that the case has already been turned over to the New Hanover and Pender County District Attorney’s Office, but authorities noted that investigators still don’t know what may have prompted the suspect to commit the alleged triple murder.

“At this time, the motive is not clear. From a preliminary investigation, it appears that the suspect and victims arrived in the same vehicle together prior to the shooting,” the department said in a statement.

Authorities have asked anyone who was at the Landfall Shopping Center on Saturday, Jan. 15 and witnessed the shooting or saw anything out of the ordinary to contact WPD detectives at (910) 343-3609.

“Homicide cases are often difficult to investigate; however, when we have good witness testimony, it enables our Detectives to solidify their cases in a more efficient manner,” the department added.