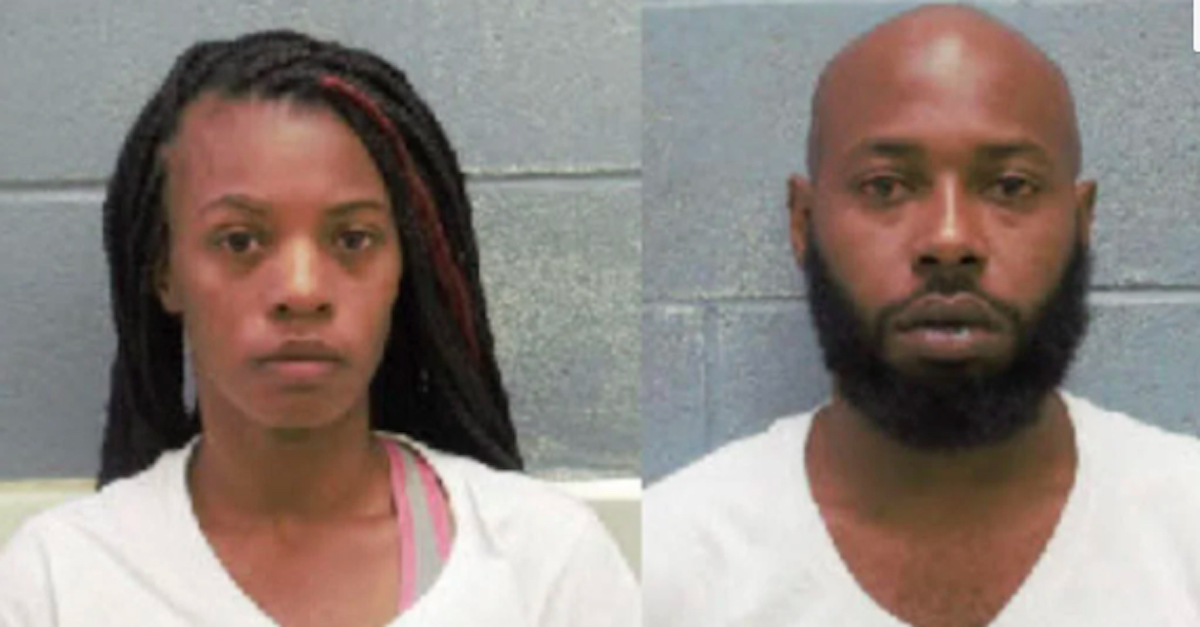 An Alabama woman and her live-in boyfriend were arrested this week for allegedly beating the woman’s 2-year-old daughter to death, leaving the child with a slew of broken bones and bleeding from her brain. Chasity U. Baker and Jamario E. Mitchell, both 28, were taken into custody Monday and charged with one count each of murder.

Officers with the Opelika Police Department and paramedics with Emergency Medical Services on Nov. 12 responded to an emergency 911 call about an unresponsive child at a home located in the 1200 block of Cherry Circle at approximately 7 a.m., the department said in a press release. Upon arriving at the scene, first responders reportedly discovered the toddler’s lifeless body in one of the back bedrooms in the home.

Baker and Mitchell reportedly told investigators that the toddler had been feeling under the weather.  They claimed they checked on her several times throughout the course of the evening and found her unresponsive the following morning.

The child was declared dead on the scene, and her body was taken to the Alabama Department of Forensic Science for a postmortem examination and autopsy. Lee County Coroner Bill Harris oversaw the autopsy; it determined that the little girl’s death was a homicide caused “multiple blunt force trauma,” per a Tuesday press release.

Also on Tuesday, prosecutors filed a deposition in the case that revealed disturbing new details about the injuries sustained by Baker’s daughter. A copy of the deposition was obtained by Mobile CBS affiliate WKRG-TV.

“The report states the child suffered a broken left and right collarbone, a broken left rib, fractured skull, and brain bleed,” WKRG said. “Forensic medical examiners indicated the severity of the injuries meant they were recent and not accidental.”

Opelika Police Chief Shane Healey told WKRG that investigators were able to determine that Baker and Mitchell were the only two people who were with Baker’s daughter in the time immediately preceding her death. The couple allegedly told investigators they were the only two people who had access to the toddler, but both reportedly insisted they did not have any idea how she sustained such severe injuries.

“It’s a horrific incident, a two-year-old is defenseless, and it’s just unfathomable that this could happen to a two-year-old,” Chief Healey told the television station.

Baker’s second child, who is older, reportedly lives with another family member and was not at the Cherry Circle residence at the time of the toddler’s death.

Baker and Mitchell were taken into custody and both are currently being held at the Lee County Detention Facility.  A judge set their bond at $450,000. Both are currently scheduled to appear in court on Wednesday.

Authorities emphasized that the investigation into the child’s death remains ongoing and asked anyone with information that may help investigators contact the Detective Division at (334) 705-5220, the Secret Witness Hotline at (334) 745-8665, or the Lee County Coroner’s Office at 334-737-3620. All tipsters may remain anonymous if they wish. Tips can also be submitted through the Opelika Police Mobile App.