Massachusetts University Lecturer Indicted on Second-Degree Murder Charge After Allegedly Hitting Her Cop Boyfriend with Car, Leaving Him to Die in Snow 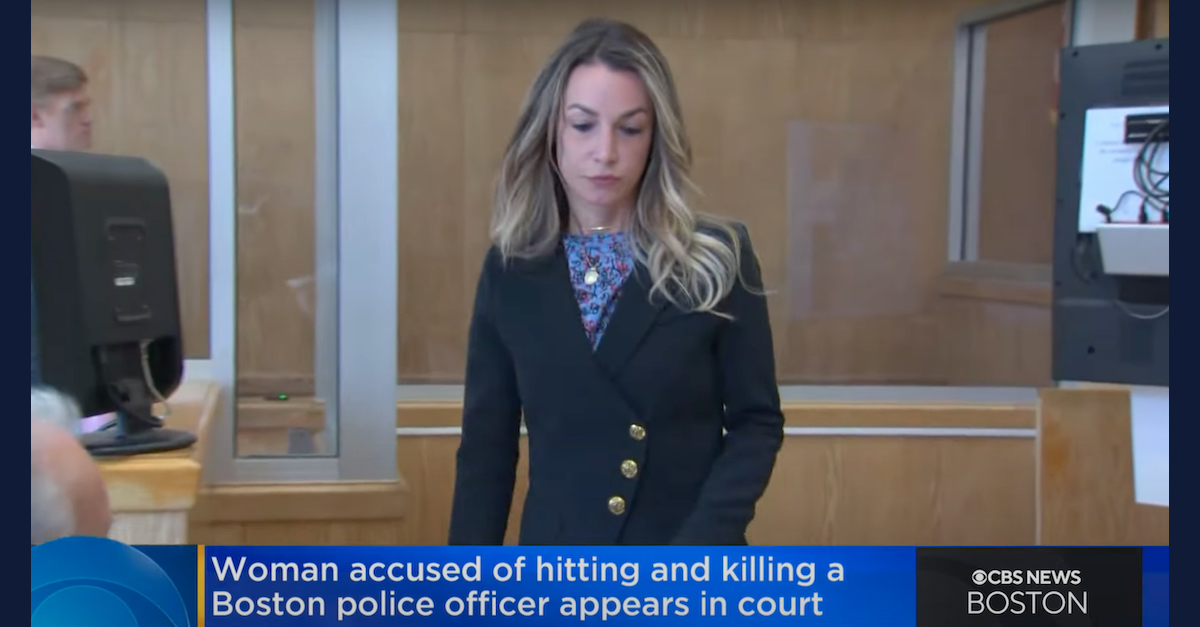 A Massachusetts grand jury has indicted a woman on second-degree murder and other charges after her police officer boyfriend turned up dead in the snow earlier this year.

Killed during the Jan. 29 incident was John O’Keefe, an off-duty Boston police officer. O’Keefe was “found unresponsive outside a Canton residence,” Morrissey’s office said. That residence was said by local news reports to have been on Fairview Road. 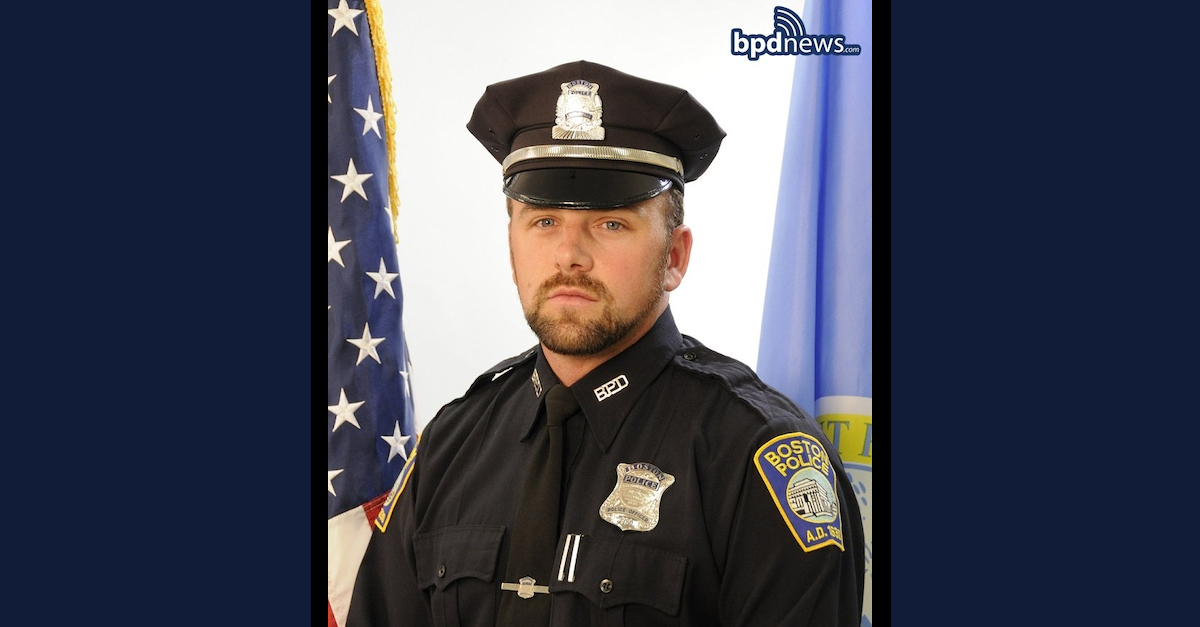 Officer John O’Keefe is seen in an official portrait released by the Boston Police Department.

As Law&Crime previously reported, O’Keefe was found mortally wounded during a weekend of significant snowfall — a Nor’easter blizzard. He was taken to the Good Samaritan Medical Center in Brockton and was pronounced dead several hours after he arrived at the hospital. Prosecutors said in court back in February that hypothermia was a contributing factor in O’Keefe’s death.

Boston ABC affiliate WCVB reported in February that prosecutors believe Read and O’Keefe went to at least two bars the Friday night before O’Keefe died. After that, they allegedly went to the Fairview Road house where a friend (who was also a police officer) lived. It was outside that officer’s home that O’Keefe was found Saturday morning, the television station said.

Read allegedly told investigators that she left O’Keefe at the Fairview Road house because she “was not feeling well,” WCVB reported. (NBC affiliate WBTS said Read indicated she was having “stomach issues.”)

“She stated that she dropped the victim off.  She made a three-point turn in the street and left — did not see the victim in the house,” prosecutor Adam Lally said, according to WCVB.

The next morning, Read allegedly told investigators that she tried to reach O’Keefe but couldn’t contact him, according to WCVB. A “distraught” Read called a friend who was apparently with the couple the night before and said O’Keefe was missing, the TV station said.

“John’s dead; I wonder if he’s dead,” Read allegedly told one of her friends during a 5 a.m. call, according to WBTS.  “It’s snowing; he got hit by a plow.”

The friend referenced by WCVB reportedly offered to drive Read to look for O’Keefe because Read was “too hysterical to drive.” The friend, a woman, drove Read using Read’s own car. During the trip, Read allegedly said, “Could I have hit him?  Did I hit him?” according to WCVB’s accounts of previous court proceedings and court paperwork.

Read and her friend (or friends) arrived at O’Keefe’s house and noticed “a cracked taillight on Read’s vehicle,” WCVB reported.

O’Keefe wasn’t at his house, so the two women then went to the home on Fairview Road where Read allegedly dropped off O’Keefe the night before, WCVB said. There, they found O’Keefe “lying near a cluster of trees.” They started to perform CPR, according to WCVB, but he was “cold to the touch,” according to court documents.

In court, prosecutors said O’Keefe was at least partially covered with snow. Citing “multiple” yet unnamed sources, WCVB reported that “O’Keefe was suffering from head trauma.”

WBTS said that an autopsy report revealed “several abrasions to O’Keefe’s right forearm, two black eyes, a cut to his nose, a two inch laceration to the back of his head, and multiple skull fractures.”

The DA’s office suggested that while those injuries are apparently known, the full autopsy findings are not complete.

“While the evidence available at this time is not inconsistent with an accidental fall, the Office of the Chief Medical Examiner has accepted the case and will determine the cause and manner of death,” Morrissey’s office wrote on Thursday.

Read pleaded not guilty to the original charge when she was arraigned on Feb. 2. She has been free on a $50,000 cash bail set by a Stoughton District Court judge.

Read was re-arrested at her home around 5:00 on Thursday, according to Morrissey’s office. She is scheduled for arraignment at some point during the midday hours in Norfolk Superior Court in Dedham. Morrissey’s office said the arraignment might occur sometime between 10 a.m. and 1 p.m. local time, but the actual time would be “at the court’s discretion.”

David Yannetti, Read’s defense attorney, said on the courthouse steps in February that Read was being charged due to “political pressure” because O’Keefe was a police officer. Yannetti said in court when the original charges were filed that his client exhibited no criminal intent.

Back in February, O’Keefe’s family released the following statement:

John was not only a dedicated police officer, he was an exemplary guardian, son, brother, uncle and friend and we were so fortunate to have him as a part of our lives.

When John’s sister passed away, and then her husband did as well a short time later, John welcomed the opportunity to raise his beloved niece and nephew and build a home and a life around their needs. People talk about someone who would give you the shirt off their back but that was truly who John was, and it is heartbreaking for us to suddenly be talking about him in the past tense.

We appreciate the outpouring of support we have received but we ask for privacy at this time, and will have nothing further to say, as we mourn this unbearable loss.

The Boston Police Department released the following statement in February:

It is with deep regret that Superintendent-in-Chief Gregory Long announces the passing of active-duty Boston Police Officer John O’Keefe. Officer O’Keefe was a 16-year veteran of the BPD who served admirably in several assignments during his career. John will be greatly missed by his friends and colleagues here at the Boston Police Department as we send our heartfelt condolences to his family, and loved ones during this difficult time.

Read was working as an adjunct lecturer at Bentley University, WCVB confirmed.

Under Massachusetts law, the possible punishment for second-degree murder is life in prison with the possibility of parole.

Second-degree murder is one of several Massachusetts crimes more adequately defined by case law. The commonwealth’s model jury instructions boil that case law down to the following, which reads like a modern criminal statute in most other states:

In order to prove murder in the second degree, the Commonwealth must prove the following elements:

(1) The defendant caused the death of [victim’s name].

(a) intended to kill [victim’s name]; or

(b) intended to cause grievous bodily harm to [victim’s name]; or

(c) intended to do an act which, in the circumstances known to the defendant, a reasonable person would have known created a plain and strong likelihood that death would result.