‘Did I Hit Him?’ Massachusetts Woman Allegedly Left Police Officer Boyfriend to Die in the Cold After Hitting Him with Her Car on Night of Blizzard 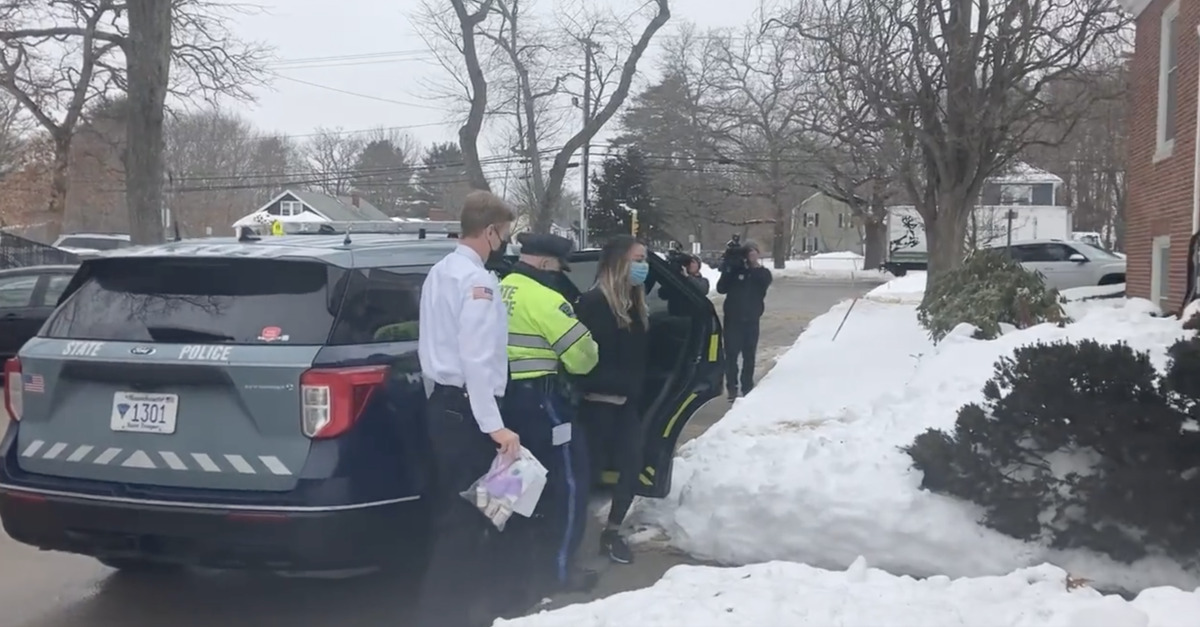 A Massachusetts woman was arrested and charged this week in connection with the death of her boyfriend, a member of the Boston Police Department, whose body was left out in the snow on a weekend of historic snowfall.

Karen A. Read, 41, stands accused of manslaughter, leaving the scene of a motor vehicle collision causing death, and motor vehicle homicide over the weekend death of 46-year-old John O’Keefe.

The BPRA is saddened over the loss of Officer John O’Keefe. This is a tragic loss and we pray for John’s family to have the strength through this most difficult time. He will be DEEPLY missed by his fellow Officers, Family and friends. God rest his soul💙🇺🇸 pic.twitter.com/rjzfI34eYX

According to a press release from the Norfolk District Attorney’s Office, the victim was found unresponsive outside of a residence in Canton, Mass. early Saturday morning on Jan. 29, 2022.

After his body was found, the officer was taken to the Good Samaritan Medical Center in Brockton, Mass. He was pronounced dead several hours after that. Read was arrested and processed at the Massachusetts State Police Blue Hills Barracks on Tuesday night.

“After several days of intensive investigation, detectives from the Norfolk District Attorney’s Office late today obtained an arrest warrant for Ms. Read,” DA Michael W. Morrissey said on Tuesday. “We expect that she will be arraigned close to 9 a.m. tomorrow (Feb. 2, 2022) in the Stoughton District Court. Additional narrative information may be put into the record during arraignment tomorrow. Tonight our thoughts are very much with those whom John left behind.”

According to Boston ABC affiliate WCVB, prosecutors say the defendant and her alleged victim went to at least two bars the Friday night before. After that, they allegedly went to a house that belonged to another police officer. According to Read, she wasn’t feeling well and went home–leaving O’Keefe at the other officer’s residence.

Read allegedly told investigators she later tried to contact O’Keefe but was unsuccessful. The next morning, the defendant allegedly told police, she noticed that her vehicle had a broken taillight.

“Could I have hit him?” the defendant allegedly said upon returning to where she left her boyfriend, according to prosecutors. “Did I hit him?”

The post-drinking trip is said to have occurred shortly after midnight. O’Keefe’s body was allegedly left in the cold for several hours–just as a massive winter storm came in–before being found. The officer was allegedly suffering from head trauma when he was admitted to the hospital, WCVB says, citing “multiple sources.”

Prosecutors went on to assert that Read told investigators she left the other officer’s house at roughly 12:45 a.m. on Saturday and made a three-point turn as she maneuvered her car away from the scene of the alleged crime–but did not see O’Keefe re-enter the residence as she left. Her attempts to contact him allegedly occurred around 4:30 a.m. that same morning, according to a roundup of the hearing by local CBS affiliate WBZ-TV.

Read later allegedly suggested her boyfriend might have been hit by a snowplow after reaching out to a friend who helped her back to the house on Fairview Road where the officer died. O’Keefe was discovered with cuts on his arms, blood coming from his nose and mouth and with his eyes swollen shut.

The pair called 911 dispatch at 6:04 a.m. and performed CPR on O’Keefe until first responders arrived.

According to the Norfolk County Medical Examiner & Coroner, the officer died due to multiple skull fractures and hypothermia. Investigators reportedly have Ring Doorbell footage of the incident.

During the hearing, Read pleaded not guilty to each of the three charges against her. She was ordered detained on $50,000 bail which was posted at the district court, the DA’s office told Law&Crime.