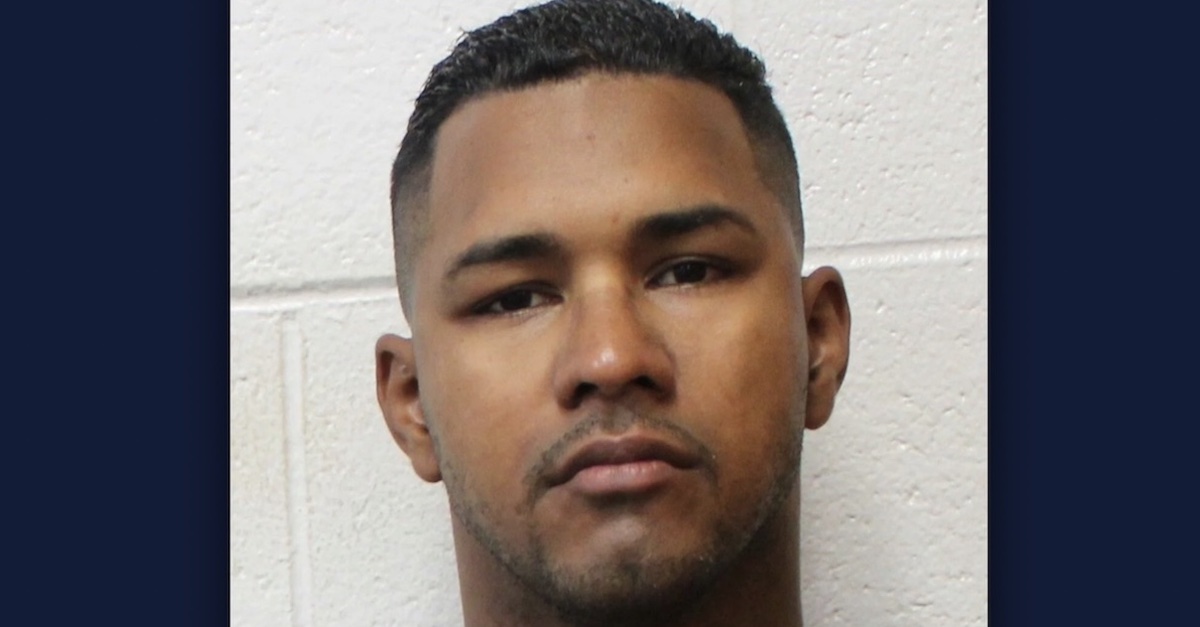 A 30-year-old sheriff’s deputy in Maryland was arrested after he allegedly sexually assaulted a woman in a department store parking lot last week then followed her from her place of employment in the following days.

Steven Victor Abreu of the Wicomico County Sheriff’s Office was taken into custody on Sunday and charged with one count each of second-degree rape, second-degree assault, false imprisonment, and sexual contact with a person in law enforcement custody, as well as three counts of misconduct in office, court documents reviewed by Law&Crime show.

According to a probable cause affidavit, a female referred to in court documents as “JA” reported the alleged sexual assault to deputies on Sunday. The victim said the encounter took place at approximately 1 a.m. on Oct. 26 in the parking lot of a Kohl’s Department Store.

Per the affidavit, the victim met a friend in the parking lot when Abreu, “in full uniform,” pulled up behind her car in marked sheriff’s office vehicle and told JA and her friend that they couldn’t be there after the store closed. The victim said Abreu spoke briefly to her friend before releasing him and speaking to her. He identified himself by name as Steven Abreu, then took down the victim’s phone number before allegedly getting physical with her, documents say.

The victim allegedly told police that she “did not consent to any of the sexual acts,” emphasizing that she “did not feel free to leave and was fearful of what would happen if she did try to run away or fight him.” The victim’s friend called to check on JA shortly after leaving and JA allegedly lied and told Abreu it was her babysitter calling and she was late to get home, “hoping he would end the assault and let her leave.”

Abreu allegedly wrote his phone number on a piece of paper and gave it to JA before letting her leave the scene. She said he sent her several text messages “of a sexual nature” over the next few days before JA blocked Abreu’s number.

On Oct. 28, JA was allegedly driving after leaving work when she was pulled over by Abreu, who allegedly “acted like he didn’t know it was her prior to stopping her.” Abreu allegedly said he stopped her for having a tag light out. He then spoke to her from the opened driver’s side window, per the affidavit.

“She said that she told him she only had a few minutes to get to the store to get diapers for her child, before the store closed. She said he asked her why she didn’t go to a different store. closer to her job. before heading in the direction of her home. indicating he had been watching her prior to her leaving from work and knew where she had gone,” the document states. “She stated that he reached in to the vehicle and grabbed her face. in the area of her jawline, with his hand. She stated that he forcefully moved her face and looked at her neck. She said he commented on marks that he had seen on her neck during the first assault, no longer being visible. She said that he then let her go and told her that he would see her again and that she was not to tell anyone about their interactions.”

The following day, JA allegedly said that she was “so fearful” of Abreu coming back to her place of employment that she had her fiancé drop her off and pick her up. When he picked her up at approximately 10:15 p.m., JA’s fiancé allegedly saw Abreu’s sheriff’s vehicle in the parking lot with the headlights on. The vehicle then went to an adjacent gas station and parked.

JA reported her alleged interactions with Abreu on the morning of Oct. 30 and detectives interviewed him later that afternoon. Detectives then allegedly recorded JA calling Abreu.

“In that call Abreu spoke to J.A. about the incident and apologized 3 separate times,” the affidavit states. “Abreu also admitted that he had turned off the camera systems in his car and his body-worn camera after the initial approach and prior to engaging in the conversation at the driver side door of J.A.’s vehicle.”

The interviewing detective reportedly noted that Abreu made “numerous” statements that the detective “knew to be untrue.”

“At the end of the interview, Abreu admitted to vaginally penetrating J.A. with his fingers. touching her breasts under her clothing, and grabbing her breasts and buttocks while she was standing outside her vehicle,” the document states. “He stated that this all happened in the Kohl’s parking lot, during the first encounter he had with her. Abreu maintained that the sexual contact was consensual.”

Abreu had been with the sheriff’s office for less than a year, according to a press release. He is scheduled to appear before a judge on Monday.