Police in Seattle, Washington released footage on Friday of a man charging one of their officers while holding a massive torch.

“The suspect can be seen in the video using a burning piece of lumber to attack an officer in his patrol car,” they said in a statement. “The suspect then runs away as the officer opens fire.”

The incident happened Thursday, authorities said. According to cops, the officer was looking for a man reportedly holding a piece of lumber that was on fire. Investigators said they believed the wood was a 2×2. In any case, the officer found the suspect as seen on footage.

“He’s just walking down the alley southbound with a stick on fire,” the officer said. “And it is very on fire.”

The lawman stepped out of his vehicle, and identified himself as police. He told the man to stop.

The subject’s reply: “Fuck you.” So the officer drove a little closer in his vehicle. Once again, he ordered the man to stop, but the individual instead charged him with the torch, and jabbed it through the driver’s side door window, which was apparently open. The officer opened fire multiple times as the man fled. The lawman escaped through the passenger side of the vehicle.

The suspect was not struck by bullets, cops said. Other responding officers used a taser on him when they apprehended him in a parking garage, according to authorities.

A picture released by the SPD showed the vehicle, burned up in the aftermath. 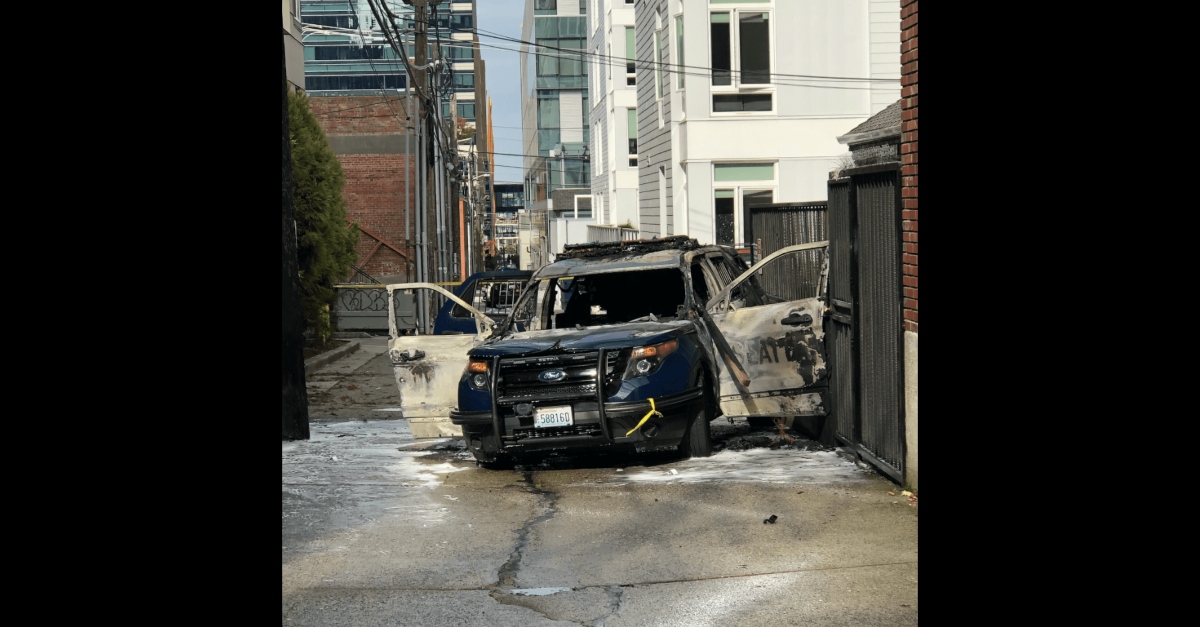 The officer involved was identified as Caleb Pomazon. He sustained non-life threatening burns, cops said. The law enforcement official has been with the department for one year, and is now on paid administrative leave as part of policy, according to police.

As for the suspect, he was identified as Brian Joseph Leil, 37, in a Q13 report. He remains in the King County Jail as of Sunday, according to records viewed by Law&Crime. Charges include assault, harassment, and stalking. It is unclear if he has an attorney in this matter.