Man Robbed Bank Using Back of His Birth Certificate as Note to Teller While Wearing Ankle Monitor from Another Case — All to ‘Prove a Point’ to His Lover: Feds 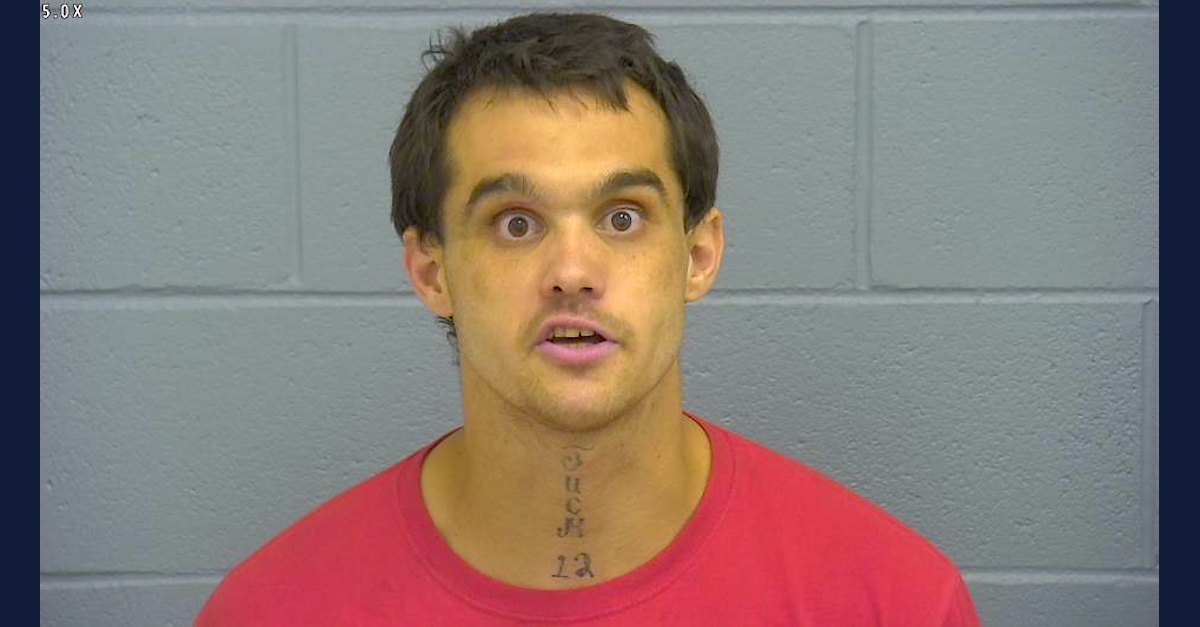 A Missouri man has pleaded guilty to robbing a local Bank of America branch using a demand note written on the back of his own birth certificate and while he was wearing an ankle monitor related to a previous case.  That device easily placed him at the scene, according to court paperwork.

He did it all, he admitted to the authorities, to “prove a point” to his lover — though it’s unclear from court records precisely what “point” he was trying to make.

Michael Conley Loyd, 30, entered his plea to one count of bank robbery in federal court on Friday, according to a U.S. Department of Justice press release.

A criminal complaint on file in the Western District of Missouri explains the incident in this slightly bumbled way:

On Wednesday, July 20, 2022, at approximately 11:30 a.m., an unknown white male (“UNSUB”), wearing a gray, cut-off t-shirt, with blue gym shorts, and an orange shoe on his right foot, enter the BOA, located at 633 West Kearney, Springfield, Missouri. The UNSUB had multiple tattoos brandished on both his left and right arms. The UNSUB approached the teller counter, presented a note to a teller, written on a white piece of printer-like paper, which was written with a pink marker or higher [sic] and it stated, “Give Your Money Now. Don’t Say Anything. I Have A Partner Outside.” The teller, who received the note will be referred to herein as D.D.

Investigators determined that the then-unidentified perpetrator had used a black Dodge Ram pickup truck as a getaway vehicle, the complaint says.

A phone call at 11:40 a.m. — ten minutes after the heist — drew the local constabulary to Loyd.  The call came from the boyfriend of Loyd’s roommate, according to court papers.  Loyd was quickly located at the Lazy Acres Mobile Home Park where he lived.

During the interview of Loyd, Loyd admitted to robbing the BOA earlier in the day. Loyd told investigators that he robbed the bank because he and his lover . . . had gotten into a fight and he wanted to “prove a point”. Prior to robbing the BOA, Loyd wasn’t sure which bank he was going to rob but he drove by the BOA and decided to pull into the parking lot, driving [his roommate’s] black Dodge Ram. While in the parking lot, Loyd used a highlighter to write the demand note. The demand note was written on the back of Loyd’s birth certificate. Loyd recalled writing, “Be quiet until I leave and give me all the money”. Loyd robbed the BOA by himself and did not receive any input or help from anyone else.

The court paperwork says he next texted his roommate and told her to tell the police that her truck had been stolen.  He also told her to start listening to her police scanner.

He then called his “lover,” Ashley, to “tell her what he had done,” the documents go on to assert.

He knew very quickly, however, that the jig was up.

“Loyd told investigators that he expected to receive prison time and he would take full responsibility for whatever punishment he was to receive,” the charging instrument states.

The sum total of Bank of America’s loss was listed as $754, the document concludes.  It also states that the teller confronted by Loyd feared for her safety.

The maximum possible sentence is 20 years behind bars and a $250,000 fine, the plea agreement indicates, but maximum sentences are rare.  A full pre-sentence investigation has been ordered.

Loyd’s type of plea provides a federal judge with discretion at sentencing.

It’s unclear from federal court records precisely why Loyd was wearing the ankle monitor.  However, Missouri state court records suggest a defendant with the same first, middle, and last name — presumably the same person — was charged with drug offenses, driving without a valid license, resisting or interfering with arrest, and a “stealing offense” (as a four-time or four-plus-time repeat offender) in the spring and summer of 2022.  That’s just part of a lengthy state-level rap sheet bearing the same name as the federal bank robbery defendant.