Man Out on Bond After Allegedly Cutting Power to Ex-Wife’s Home, Breaking In, and Shooting Her Four Times on Day of Child Custody Hearing 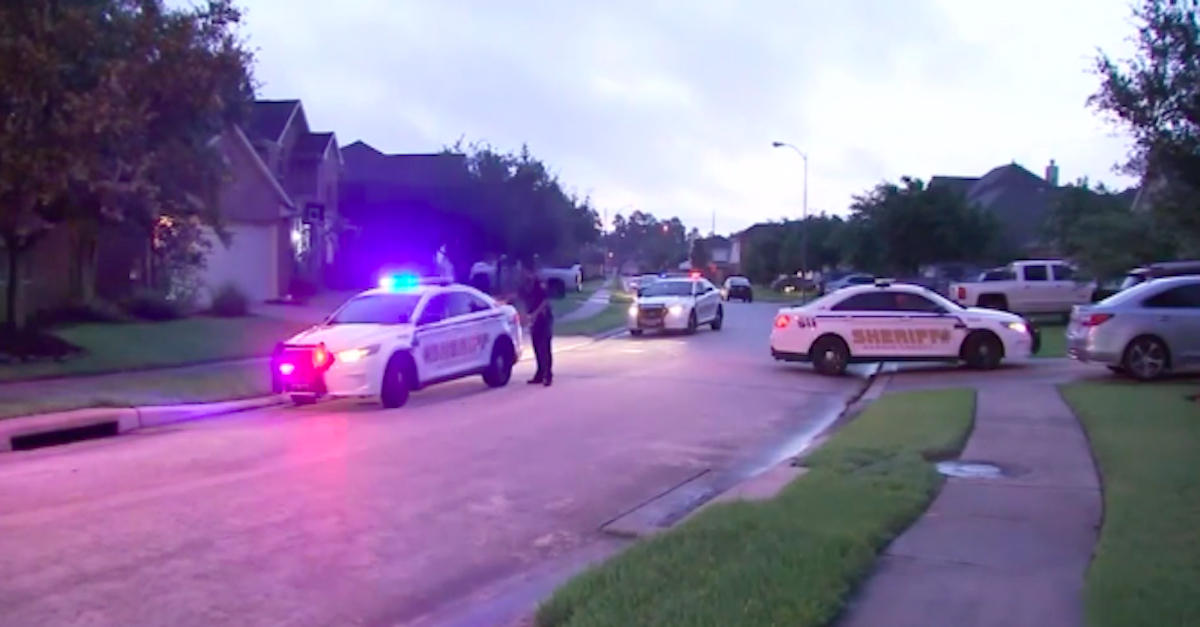 Police at the home of Andrea Walker Wright after she was shot four times.

A Texas man was arrested after authorities say he cut the power to the home of his ex-wife and four children at 3:30 a.m. Monday, then broke in through a window and shot her four times while the kids were asleep, several news outlets reported. The onetime couple was scheduled to appear in court just hours later for a child custody hearing.

The ex-husband, Aaron B. Wright, appeared before a judge on Tuesday who set his bond at $175,000 and additionally ordered him to stay at least 200 feet away from his ex-wife’s home — even if his children are inside — should he be able to post bond. He was charged with one count each of burglary and aggravated assault.

Court records indicate the defendant subsequently posted bond and has been released from custody.  So, he’s currently on the streets.

His former wife, Andrea Walker Wright, survived the shooting and was recovering from surgery in the ICU of a local hospital. She is reportedly in stable condition, according to Harris County Sheriff Ed Gonzalez.

According to a report from Houston ABC affiliate KTRK, the judge presiding over Aaron Wright’s initial hearing emphasized the “elaborate” nature of his alleged “plan to break in” and the “technique” used to gain entry to the house. The judge noted that the electrical box on the side of the home — which was allegedly used to cut the power — was left unlocked at the time of the shooting. That disabled the alarm, allowing the intruder to enter the home undetected through a back window. His bond was breakdown was $100,000 for burglary and $75,000 for aggravated assault.

An attorney for Aaron Wright argued that his client’s bond should be lower because he consistently paid child support for his children, whose ages are 7, 9, 11, and 13.

KTRK further reported that investigators have obtained surveillance camera footage that allegedly shows Aaron and his girlfriend walking in the direction of his ex-wife’s house Monday morning at 3:08 a.m., then running away in the opposite direction at 3:10 a.m. The Harris County Sheriff’s Office told the television station that Aaron’s girlfriend had not been charged in the case, but law enforcement said the office was working to confirm the identities of everyone involved in the incident.

Law enforcement authorities told KTRK that they believe Aaron likely suspected that he was going to lose custody of his children later that day.

A judge had granted a temporary restraining order against Aaron in February 2020 but refused to extend the protection further in November.

Melissa Geoghagan, a friend of Andrea’s, told The Daily Beast that Andrea lived in fear of her ex-husband, especially since their divorce in 2018.

“He started harassing her soon after she left, but even when they were married, he had financial control over her. He lost it after the divorce, but I think she was scared to confront him about it,” she said.

“[Andrea] has been saying this was going to happen for years, and it just fell on deaf ears. I bet people are listening now that he finally snapped.”

Andrea’s neighbors, Richard Carlson and Elda Carlson, told local NBC affiliate KPRC-TV that they believed Aaron had broken into Andrea’s home when she first moved into the neighborhood after the divorce.

Geoghagan said Andrea still has a couple of more surgeries to endure, saying her femur was “completely shattered” by a bullet and requires “rods and pins” to repair.

Leaving the courthouse on Tuesday, Aaron denied being involved in the shooting when confronted by KTRK reporter Shelley Childers. The exchange was reported as follows:

Shelley: Aaron, why did you try to kill your ex-wife?

Shelley: You didn’t try to kill your ex-wife? Did you shoot her four times?

Shelley: Did you shoot her four times while your children were in her home?

Read some of the file in the two cases below: