Man, Girlfriend Accused of Torturing His Estranged Wife for Days by Sodomizing Her with Baseball Bat, Cutting Off a Finger, Forcing Her Head into Toilet 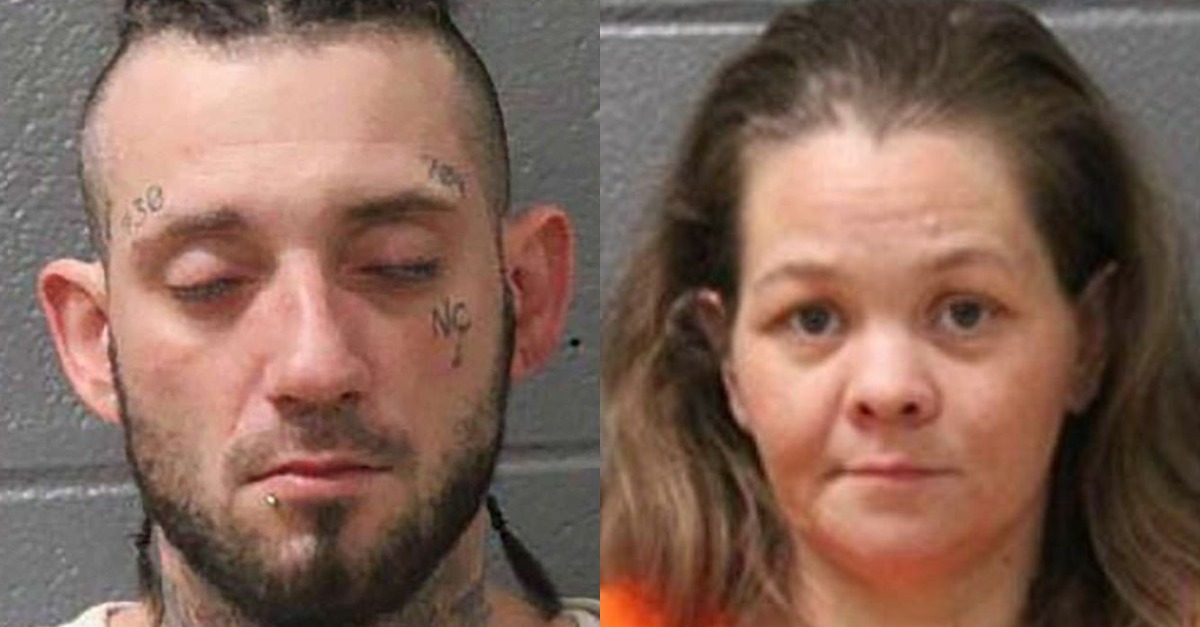 An upstate New York man and his girlfriend were arrested late last week over allegations they both brutally tortured the man’s estranged wife over the course of nearly a week starting New Year’s Eve.

Justin J. Wilson, 31, and Nicole K. Elmore, 35, each stand accused of kidnapping, assault with intent to disfigure and aggravated sexual abuse over shocking allegations made by the 37-year-old victim.

The gruesome saga began around 7:30 or 8:30 p.m. on the last night of last year, the victim alleged. That’s when the woman says her husband and his new girlfriend showed up at the home in Gloversville, N.Y., the onetime glove-making capital of the United States, where she was staying. Wilson was allegedly toting a gun and he forced his way into the residence. Eventually, the victim was ordered to lie face down in the back of the duo’s SUV.

“I was afraid that he would severely hurt me if I didn’t,” the woman said in court documents obtained by The Daily Gazette.

The victim said she was eventually taken to a trailer after a 45-minute-long drive in which the alleged perpetrators are said to have blared “gangster rap music.” Upon arrival, she was severely beaten, then thrown and locked inside of a room containing a pit bull.

“Throughout the entire time I was with Justin, he was threatening to kill me and told me if I didn’t kill myself, he would kill me,” the woman told New York State Police. “He beat me, burned me, cut off my finger, sodomized me and I thought I was going to die.”

When she woke up the next day, the victim was allegedly taken to another room where she was forced to undress before she was burned on her hand, forearm, ribcage and back.

On day three of the horrific ordeal, the woman was allegedly forced to clean dog feces from all over the trailer before being forced to perform oral sex on Wilson. After that, she was allegedly told she wasn’t good enough and then directed to put her hand down on a flat surface. The woman says she next remembers seeing her husband cutting off the edge of her right-hand pinky finger. Wilson then allegedly used a flame in a crude effort to cauterize the wound, the victim claimed.

On the fourth day, the woman said that she was sodomized by Wilson with some kind of a bat. The Gazette reports that a “T-ball bat” was used while the Times Union says a “baseball bat” was used.

The victim recalled that on the fifth day, Wilson and Elmore drove her to a motel in Amsterdam, N.Y. where the torture continued.

She attested to being whipped with a charging cable attached to a wrench, sexually assaulted with a ring taken off of her hand by Wilson, and forced to put her head in a toilet filled with urine, according to court documents obtained by the Times Union. Wilson also attempted to drown her in a hot tub there, the victim told police.

“Nicole was involved in everything,” she said in a Jan. 7 statement.

The victim was able to escape the day before after Wilson allegedly drove her around again in the SUV. Returning to Gloversville, the woman was told to, again, lay face-down in the back. After her tormentor stopped at an unknown residence and went inside, she waited a few minutes and fled before seeking help at a local grocery store. Told to wait outside because she refused to wear a mask, the woman eventually made her way to a cab stand where a car took her to her grandfather’s home in the small town. Her grandfather rushed her to nearby Nathan Littauer Hospital before calling police.

Wilson was arrested late Thursday evening after a two-hour standoff. Elmore was arrested after being located inside a vehicle.