No Jail Time for Retired Kansas Woman, 56, Who Joined Jan. 6 Crowd Inside Capitol 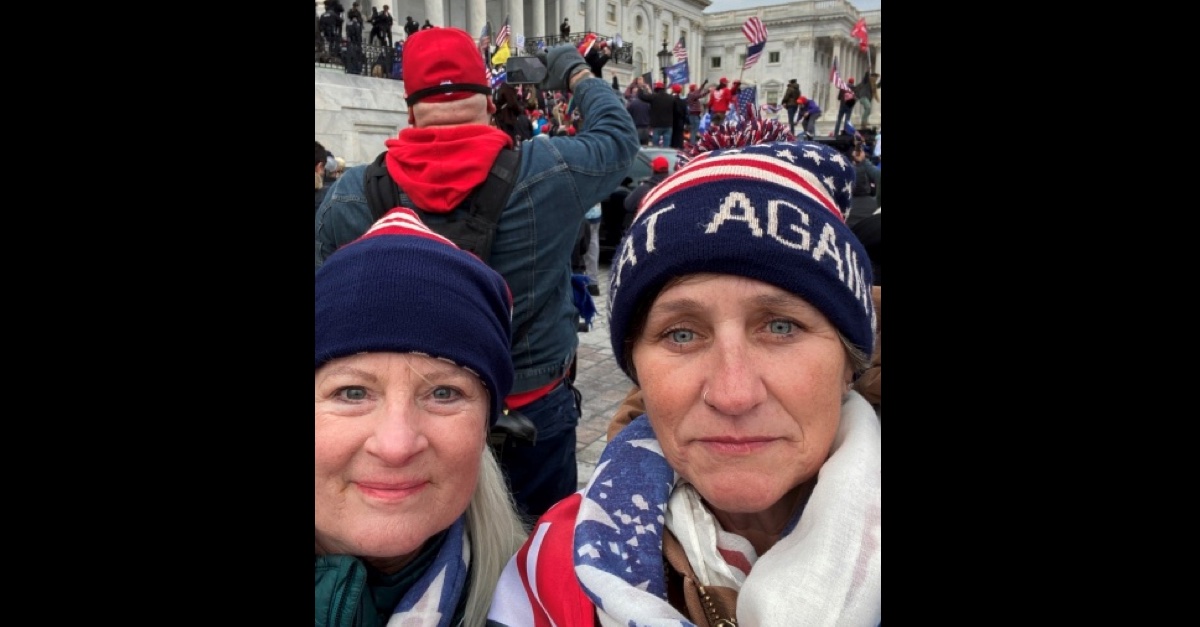 A pair of Kansas retirees who admitted to unlawfully entering the Capitol on Jan. 6 have been sentenced to two years of probation and 60 hours of community service.

Esther Schwemmer, 56, and her friend Jennifer Parks, 61, were not among those in the front lines of Donald Trump supporters who overran police to breach the U.S. Capitol on Jan. 6. They had attended Trump’s “Stop the Steal” rally and walked with the crowd over to the Capitol building, where they appear to have spent time outside taking pictures.

They entered the building after the barricades had been overturned and the windows and doors had been broken. Prosecutors acknowledge that they didn’t engage in any “destructive of violent activity while inside the Capitol Building,” and they left the building when told to do so by police.

However, prosecutors say, they were nevertheless part of the crowd that entered the building with the goal of stopping the Electoral College certification of Joe Biden‘s win in the 2020 presidential election. They ignored multiple signs that they weren’t supposed to be in the building in the first place, including blaring alarms, broken doors, and the sight of people scaling the walls of the Capitol. Once inside, they went to the second floor of the building, where they reportedly joined a group of people praying and singing the national anthem, according to prosecutors.

Schwemmer, a retired hairdresser, and Parks, both pleaded guilty to one count of parading, demonstrating, and picketing in a Capitol building, a misdemeanor that carries a potential sentence of six months in jail. Prosecutors had requested 30 days of home incarceration followed by three years of probation, plus 60 hours of community service and $500 in restitution. Both Schwemmer and Parks had asked for 12 months of probation only.

“I’m deeply ashamed of my actions on that day,” Schwemmer, a retired hairdresser, said in court Monday. “Nothing about it was Christ-like … I hope in time I can forgive myself.”

Schwemmer, a naturalized U.S. citizen who spent her childhood in a post-World War II refugee camp in Germany, had gone into more detail in the letter she submitted with her sentencing request.

“I wish only to disappear into obscurity for the remainder of my years,” she said in her letter. “I’m determined to stay away from politics and work on trying to make amends for my conduct on January 6. I am deeply sorry that what started out as an act of patriotism on my part ended up so wrong.”

Friedrich said that she believed that Schwemmer was truly remorseful for her actions.

“None of us are defined by the worst mistake we’ve made,” Friedrich said. “I hope you can forgive yourself. I do appreciate what I think is your genuine remorse here.”

However, Friedrich said that even the misdemeanor parading and picketing charge was a “very serious offense,” and that Schwemmer’s actions “in no way were an act of patriotism, nor was it an exercise of her First Amendment rights.”

More than 50 defendants prosecuted in the Jan. 6 Capitol siege have pleaded guilty to the misdemeanor picketing or parading charge. Sentences have ranged from just two months’ probation to the maximum six months of incarceration.