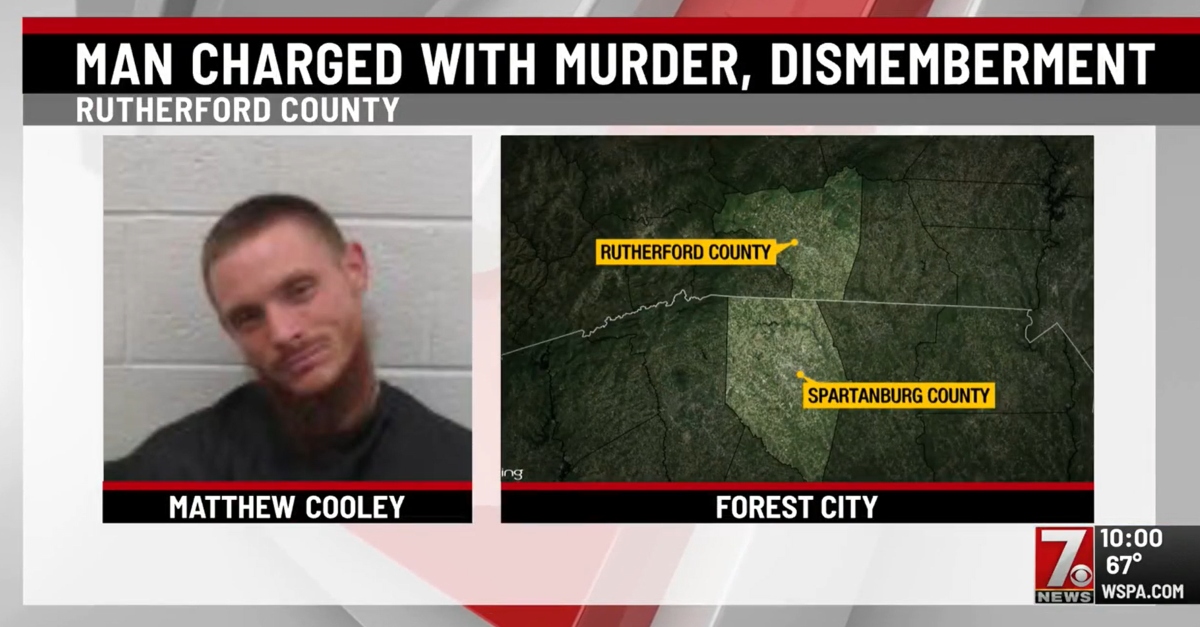 A North Carolina man is accused of murdering his roommate, then dismembering the corpse and the remains of a missing woman.

Forest City resident Matthew Thomas Cooley, 34, was arrested by the Rutherford County Sheriff’s Office, according to WSAP, a local CBS affiliate. The bodies of his roommate Jason VanDyke, 44, and missing woman Tracy McKinney, 42, were found Monday at the home on 482 Morningstar Lake Road, authorities said.

Cooley murdered VanDyke sometime between Saturday and Monday, authorities said. Though he has not been charged with killing McKinney, authorities suggested he was responsible for the dismemberment or destruction of her body.

There is probable cause that Cooley murdered VanDyke, authorities allege in arrest warrants obtained by Law&Crime. When it comes to both VanDyke and McKinney, Cooley faces charges of dismembering or destroying human remains, as well as failing to tell law enforcement about their deaths. Both warrants accuse Cooley of “dismembering or destroying” VanDyke and McKinney’s remains by “removing body parts.” Only in the murder case of VanDyke does Cooley stand accused of having acted with “malice aforethought.”

McKinney was last heard from last Wednesday, authorities said. Family reported her missing on Sunday, according to WYFF, a local NBC affiliate. She is reportedly from the town of Ellenboro, which is just a short drive west to Forest City.

The investigation into her death is ongoing. The autopsies on hers and VanDyke’s bodies are scheduled for Wednesday, according to WSAP.

“It blew my mind that something like that would happen this close to home. Right at our back door,” said Cooley’s neighbor Sandy Carver, according to the station.

Deputies did not suggest an alleged motive. Neither did they say how they believe VanDyke and McKinney died. They did not say how McKinney may or may not have known Cooley or VanDyke.

“We’ve been here going on 27 years and nothing like this has ever happened and it’s scary. I couldn’t believe it, it’s unbelievable,” Carver said. “It still is. It’s like a movie.”

The Rutherford County Sheriff’s Office did not immediately respond to a Law&Crime request for comment.