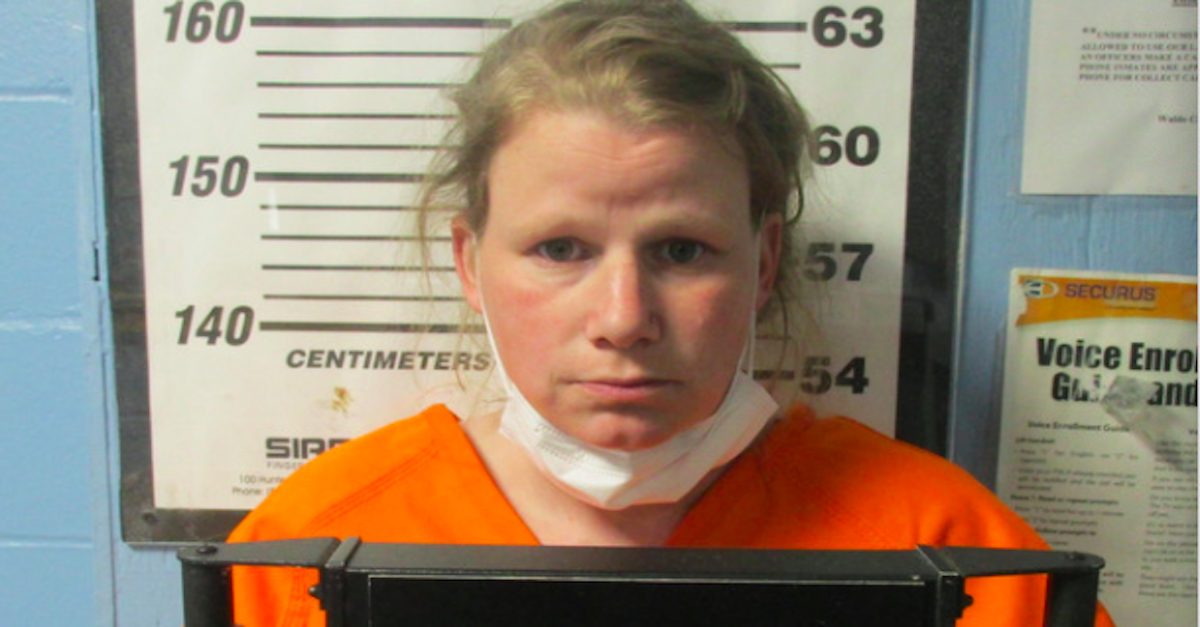 A 35-year-old Maine woman was indicted last week for allegedly murdering her 3-year-old son after an autopsy reportedly showed that the child had suffered numerous horrific injuries.

According to The Bangor Daily News, a grand jury in Waldo County indicted Jessica Trefethen, formerly known as Jessica Williams, on the charge of depraved indifference murder. Trefethen was arrested and charged in June after investigators discovered that she had brought her son Maddox Williams to the Waldo County General Hospital where he was found to have suffered a fractured spine, bleeding in his brain, a ruptured bowel, and extensive bruising on his head, stomach, arms, and legs, among other injuries.

The Bangor Daily News previously reported that Trefethen, a mother of five, had told doctors and hospital staff that Maddox had been knocked over by a dog leash and then kicked by his 8-year-old sister.

According to a police report obtained by the outlet, hospital employees said that the child was not breathing when he arrived at the emergency room and the staff was not able to resuscitate him.

The Maine Medical Examiner’s Office later said that Maddox’s cause of death was “multiple blunt force trauma” that was determined to have been inflicted “non-accidentally.”

Following the child’s death, police reportedly attempted to contact Trefethen but were unable to locate her for several days. Her mother, Sherry Johnson of Stockton Springs, was charged with obstruction for allegedly helping her daughter conceal her whereabouts from the police, the newspaper reported. After she was taken into custody, Trefethen allegedly told police that she had no idea how her son came to suffer such horrendous injuries, though she did say that Maddox “bruised very easily and her kids play wild and crazy,” according to a copy of an affidavit obtained by the Bangor Daily News.

Maddox’s 8-year-old sister told detectives that the child fell down while the two were playing.

“[She] said she and Maddox were running and holding hands and that Maddox fell and hit his head on a rock,” Maine State Police Detective Hugh Landry wrote in the criminal complaint. “[The sister] said after Maddox hit his head, he went inside to get a drink.”

Maddox’s 4-year-old brother reportedly told a caseworker with the Maine Department of Health and Human Services that he thought his brother was “faking a seizure” before his death.

According to a report from local CBS-affiliate WGME, Johnson later told police that she knew within hours of Maddox’s death that her daughter would be arrested and conceded that she knew it was wrong to try and prevent police from finding Trefethen.

Johnson allegedly told investigators initially that Maddox had been pushed down by a puppy and “his tummy hurt.” She also allegedly said the young boy fell off of a trampoline.

But Dr. Lisa Funte of the state medical examiner’s office told detectives that none of the explanations offered could have accounted for the extensive injuries Maddox suffered.

“Dr. Funte stated Maddox’s injuries were too severe to be caused by kids playing, falling from a trampoline, or being knocked down by a puppy,” Landry wrote in the complaint.

After Maddox was declared dead on June 20, Johnson told police that her daughter was distraught and wanted to be alone, so she dropped her off at a pier in Searsport that night and hadn’t seen her since. Johnson kept telling police that she had not heard from her daughter.

Surveillance camera footage from Johnson’s home reportedly showed, however, that Trefethen was staying with her mother. When officers returned to the home on June 23, Johnson continued denying knowing her daughter’s whereabouts.

“When asked by the detectives if they could look inside the residence, Sherry admitted Jessica was inside,” the report stated.

Johnson was arrested and released on $2,000 bond.

Trefethen’s bond was set at $150,000 and conditioned on her not having any contact with children under the age of 14. A status conference was scheduled from Oct. 28.