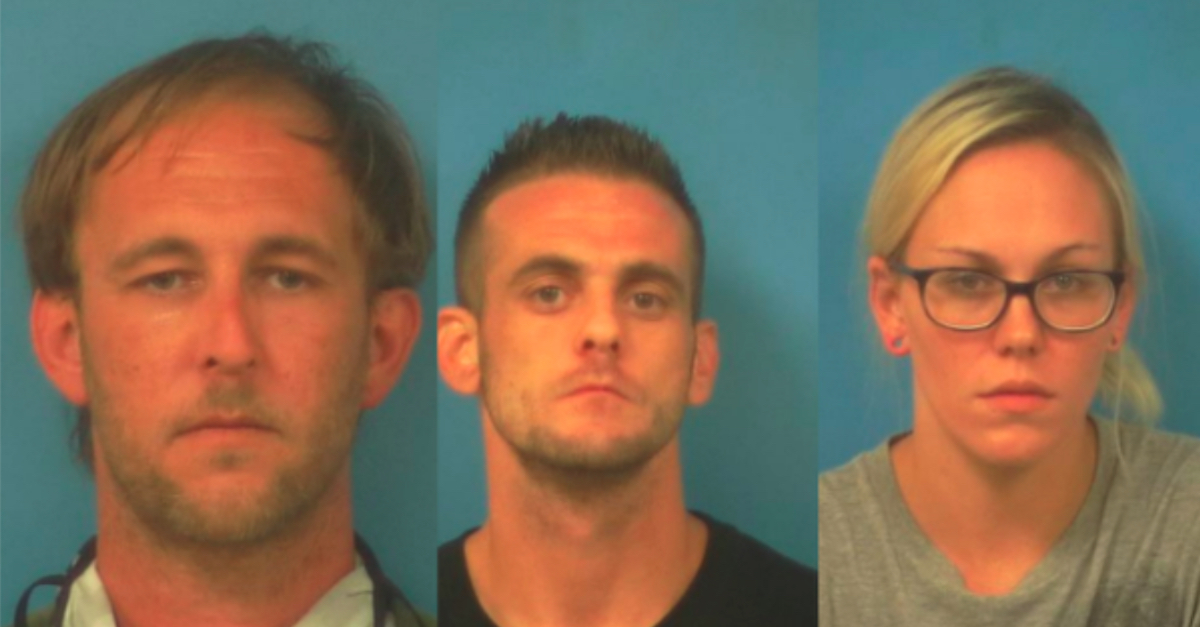 A trio of Las Vegas residents were arrested earlier in August after police say that they kidnapped 27-year-old Roy Jaggers, savagely tortured him for several hours using a variety of weapons—including a blowtorch—forced him to strip naked and walk off a cliff, then shot him, the Nye County Sheriff’s Office announced.

Sheriff’s Captain David Boruchowitz said that Jaggers’ neighbor, Heather Pate, Pate’s boyfriend Kevin Dent, and Brad Mehn, Pate’s “friend and previous lover,” had all been taken into custody and charged with murder, kidnapping, conspiracy to commit murder, and battery with substantial bodily harm in connection with his death.

According to Boruchowitz, Pate and Dent lured Jaggers to Pate’s home where they beat and handcuffed him because they believed that he had harmed Pate’s young son. They then threw him in the back of a car and drove him out to a remote area in the desert in Nye County where they tortured him “over multiple hours utilizing numerous different weapons,” authorities say.

The Las Vegas Review-Journal reported that the trio allegedly tortured Jaggers with a blowtorch, ax, baton, and knives.

Boruchowitz said that when they finished torturing Jaggers, they allegedly drove him approximately 25 miles to Cathedral Canyon where they forced him to strip naked and walk off of a cliff. After he landed in a gorge, Mehn is accused of using a firearm to shoot at him multiple times, ultimately killing him.

Mehn’s court-appointed attorney, Thomas Gibson, on Wednesday told the Review-Journal that Nye County prosecutors were considering the death penalty for his client.

The Review-Journal also spoke briefly with Jaggers’ parents. Although the couple refused to talk about the specifics of their son’s grisly murder, his mother, Kassy Robinson, told the outlet that she knew her son would occasionally babysit Pate’s children and look after her dogs. She said she did not know Pate very well, but emphasized that she knew her son well enough to be sure that he did not harm Pate’s children.

Roy’s father, Jerry Jagger, was still in shock about the entire ordeal.

“How can you do that to another human being,” he said of the alleged horrific torture his son endured.

Documents filed in the Clark County District Court Family Division that were obtained by the Review-Journal allegedly show that Pate had been in a heated battle over custody over her sons, ages three and four, with their father. Following Pate’s arrest, the father filed additional documents seeking full custody of the children which claimed that the kids had witnessed the beginning stages of the crime that allegedly took place inside of Pate’s residence.

The three alleged culprits are all being held at the Nye County Detention Center without bail and were scheduled to appear for a preliminary hearing Thursday.