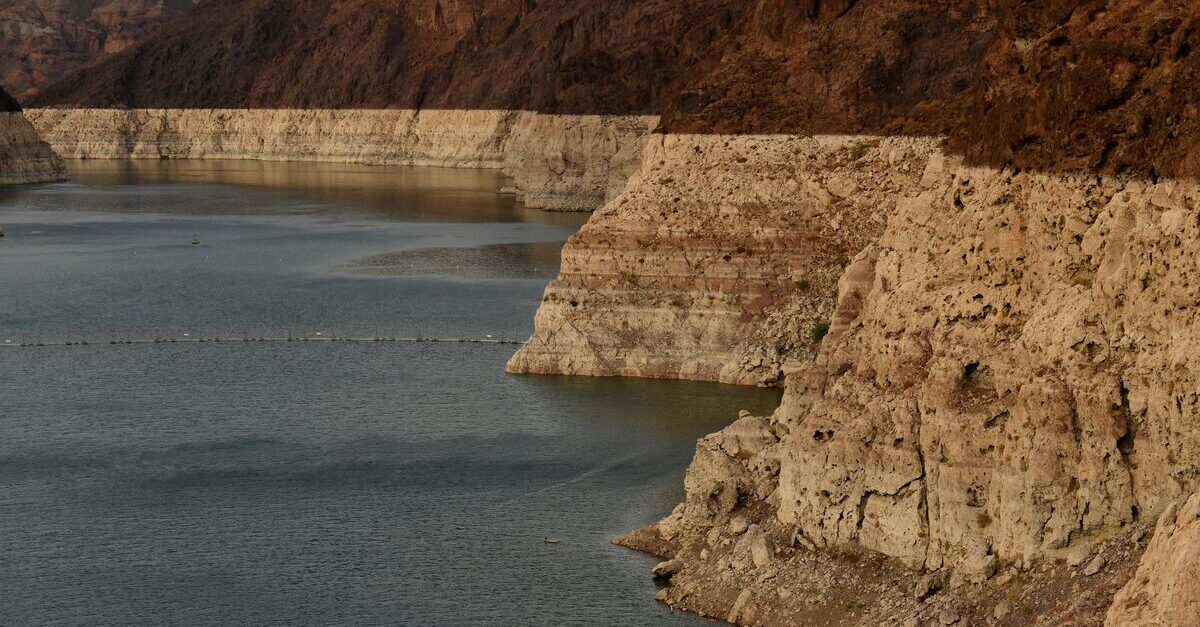 A “bathtub ring” is visible during low water levels due to the western drought on July 19, 2021 as seen from the Hoover Dam at Lake Mead, near Las Vegas.

Update: A TV crew has discovered a second barrel.

Police in Nevada say a body recently found stuffed inside of a rust-covered, metallic barrel at the bottom of a fast-fading lake belongs to a man who was shot to death as far back as the 1970s or 1980s.

On Sunday, May 1, 2022, National Park Service rangers found the barrel near Hemenway Harbor at Lake Mead National Recreational Area. The discovery came just after 3:00 p.m. on the day in question after a witness reported seeing a body inside the container, the agency said in a statement obtained by the Las Vegas Review Journal.

“Homicide is responding to an event near the main Marina launch ramp where there [sic] we believe a dead body has been found,” the Las Vegas Metropolitan Police Department told Las Vegas NBC affiliate KSNV. “I have no further details at this time. This is an investigation that is in its infancy.”

Since then, the investigation had moved forward apace.

Police now believe the man in the barrel was wearing shoes and clothes that were sold at Kmart during the middle and late 1970s–giving police a timeframe that suggests he was killed between then and the early 1980s.

One witness on the lake that day described the gruesome find.

“We were loading up the boat and a woman actually saw it first and screamed,” Shawna Hollister told the Review-Journal. “So my husband went to check it out and he confirmed it was a body.”

“My husband heard a woman scream and then he went to look and found the body in a very deteriorated 50 gal drum,” Hollister elaborated in comments to KNSV. “He found a man that was mostly bones, except for some of his shirt and belt showing.”

Local police arrived after park rangers called them in.

“There was a person out at the lake and noticed a barrel that was stuck in the mud,” LVMPD Lieutenant Ray Spencer said on Monday.

The discovery was actually precipitated by a dearth of precipitation in the region. Water levels at Lake Mead, the country’s largest reservoir, have been declining precipitously since 2000. There was a slight uptick in 2011 but the overall the trajectory has been downward for well several decades, according to readings taken at the Hoover Dam by the U.S. Bureau of Reclamation, which manages the lake.

The Clark County Coronorer’s Office is currently trying to determine the identity of the man found in the barrel.

“We do have some items that were recovered inside the barrel,” Spencer added in comments to the Review-Journal. “We are going to see if we can make a link in terms of identification. It is a very uphill battle in trying to get the victim identified and solve the case.”

“We are going to try to reach out to UNLV to have a scientist kind of give us an estimate regarding the corrosion of the barrel, looking at the marine life, to solidify a timeline,” the lieutenant added.