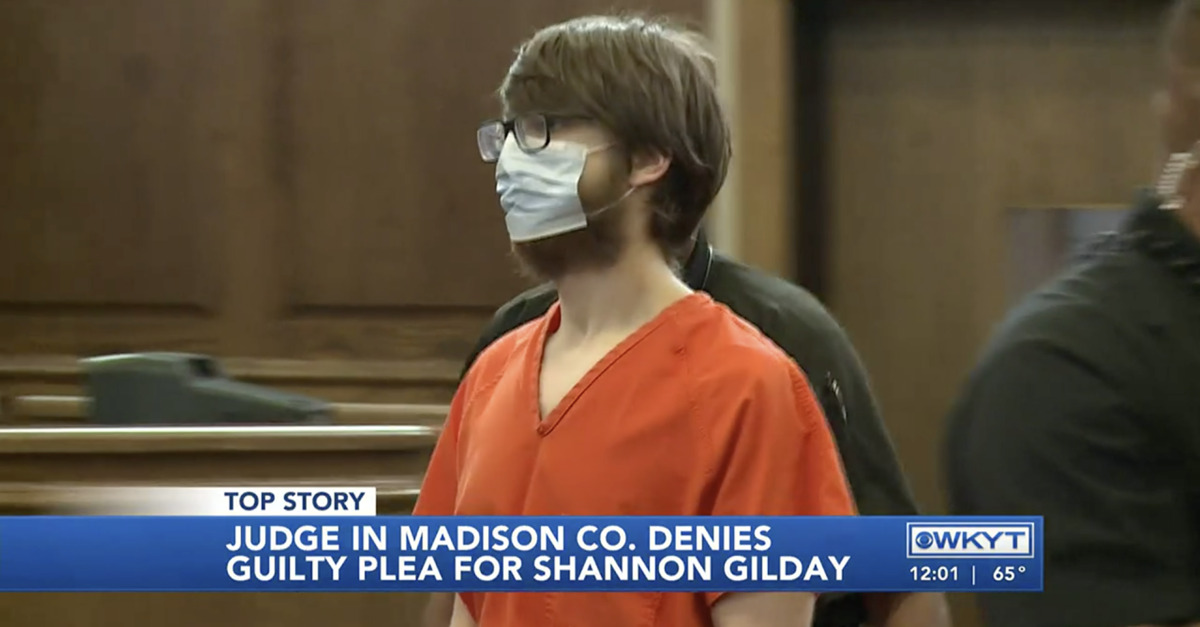 A Kentucky man who tried to legally accept culpability for killing the daughter of a former state legislator was not allowed to do so during a hearing on Monday—at least not in the exact way he wanted. That effort led to a dispute between the state and the defense. Ultimately, the judge had to step in for clarity’s sake.

Shannon Gilday, 23, stands accused of killing 32-year-old lawyer Jordan Morgan in late February. Police say he committed the crime as part of a plan to gain access to the Morgan family’s “doomsday bunker” inside their Richmond, Ky. mansion.

In fact, the defense doesn’t really dispute the charges.

As Law&Crime previously reported, Gilday initially pleaded not guilty after his arrest–but last week signaled to change his plea to guilty but mentally ill, an admission of guilt that aims to reduce a criminal’s eventual punishment. Such pleas, however, are not a guaranteed way of escaping harsh sentencing–especially for those who commit violent crimes, according to criminal law experts.

Assistant Commonwealth’s Attorney Jennifer Smith was opposed to the plea change from the start–citing the prospect of not being able to extract a particularly harsh sentence out of the case. During Monday’s hearing in Madison County, the prosecution reiterated the state’s opposition to the guilty but mentally ill plea.

According to a report by Lexington, Ky.-based CBS/CW affiliate WKYT, prosecutors formally moved against having the new plea entered, saying they wouldn’t accept Gilday’s (or his attorney’s) word for it and requesting proof of the defendant’s alleged mental illness.

In the end, the judge entered a plea of not guilty.

Complicating matters was a notice sent last week to the defense that typically seeks enhanced penalties including life without parole, life without the possibility of parole after 25 years, or the death penalty.

Griffiths told the Lexington Herald-Leader he received the notice the day after he signaled his client’s intent to plead guilty but mentally ill.

“As I indicated when we were here last Thursday, it was our intent to enter a plea of guilty but mentally ill, since that time the commonwealth has filed a notice of aggravated circumstances, that does tie my hands as counsel somewhat because the notice does not specify death as a possible punishment,” the defense attorney told the paper. “If the death penalty was a possible punishment in this case, then I would not be able to proceed with a plea of guilty but mentally ill as the court and commonwealth know the ADA standards have a requirement for cases to have a full defense team to be put together. Everything changes.”

To hear Griffiths tell it, the main reason Gilday was unable to plead guilty but mentally ill on Monday was due to ambiguity about whether or not the state was actually seeking capital punishment in the sentencing enhancement notice. Smith dismissed that understanding as “somewhat performative.”

Despite the precise procedural reason, Griffiths agreed that he couldn’t enter the plea he had hoped to enter–but then declined to enter a plea for his client at all.

“I now have to go back, I have to put together a large defense team and we have to take all sorts of additional steps,” he said. “We are unable to enter a plea of guilty, but we are also not entering a plea of not guilty.”

In an additional oddity, Griffiths also said he is not asking for and would refuse discovery–in part because it is clear and admitted what Gilday did.

Judge Cole Adams Maier sided with the commonwealth, saying they were within their rights to pursue additional punishments at a later date and agreeing that Gilday could not enter a plea of guilty but mentally ill at the time.

“That then takes us to what our options are here today,” the judge said. “I am saying that in part because I want to be clear. Criminal rules now say that if a defendant refuses to plead or if the court refuses to accept a certain plea then the court shall enter a plea of not guilty to the extent that this could be categorized as a refusal.”

A pre-trial conference is currently slated for June 22, 2022.