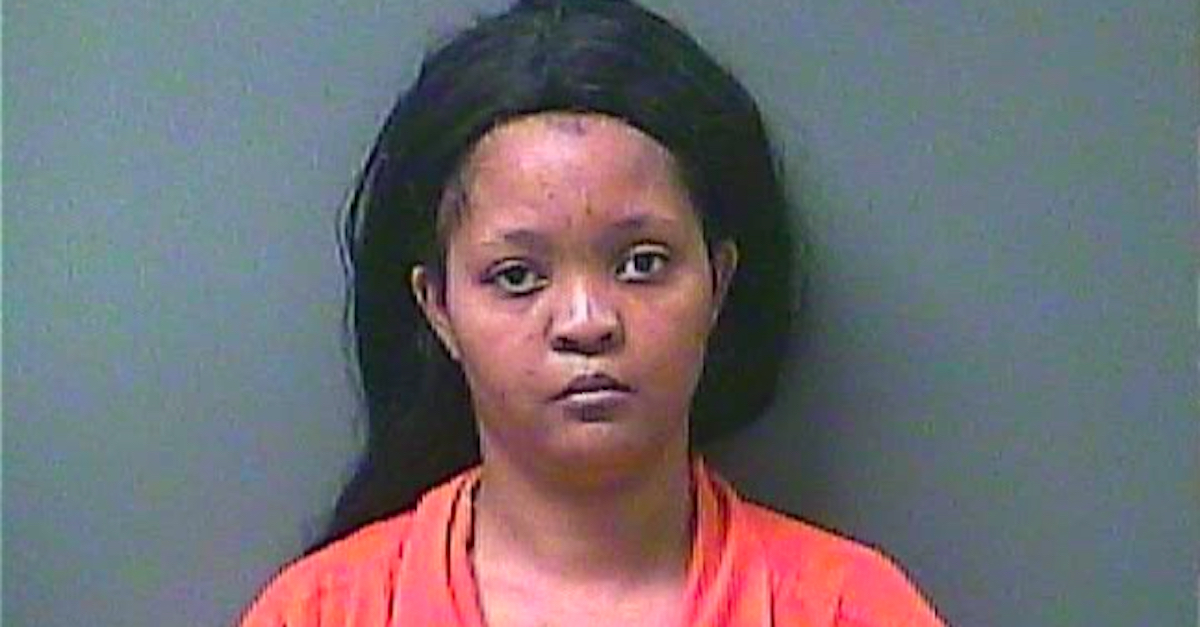 An Indiana woman has left her community in shock after police say she murdered her husband, chopped up his corpse, and then had her two children help her place his dismembered body parts into bags and load them into his vehicle.

Thessalonica Allen, 34, is alleged to have fatally shot Randy Allen inside the married couple’s home while her two children, both of whom were only identified as being under the age of 16, were inside the LaPorte apartment, multiple local news stations have reported.

Investigators who spoke to the children said both reported hearing a “loud bang” and running into their mother’s bedroom where they found Allen lying on the floor begging them to call 911, but their mother told them not to and sent them back to their rooms, per court documents obtained by the South Bend Tribune. The alleged crime took place on July 27.

Later in the same night, Thessalonica allegedly woke the two children up and told them to help her drag Randy Allen’s corpse outside the house and into his car, but the three were unable to move the body because it was too heavy. This allegedly led Thessalonica to resort to even more horrific and grisly tactics to dispose of the body.

The children reportedly told detectives that Thessalonica went out the next day and brought back an assortment of cleaning supplies as well as an ax, which she allegedly used to dismember Randy Allen’s corpse. The suspect then had the kids help her place the pieces of the dismembered body in a tote bag, but it was still too heavy for them to move, the report stated. The children allegedly told investigators that their mother said she planned to load Randy Allen’s body into his car and drive it to a location in South Bend where she would set it on fire, but the body remained too heavy for the three to move.

Police were notified about the situation by a man who had previously been in a relationship with Thessalonica Allen and who was the father of one of the children, The Times of Northwest Indiana (NWI) reported.

The man, whose identity was not revealed to news outlets, allegedly told investigators that Thessalonica called and told him to home to the apartment because Randy Allen was beating their child. According to this story, she picked him up and when he arrived at the home, the witness said Thessalonica showed him Allen’s body and told him that she had to kill him because he was beating her and the kids. She then asked him to help her move the body but he said he declined and asked to be driven back home. The man further claimed that during the drive back to his home, Thessalonica threw a gun out of the car window, per the report.

Police officers later found Thessalonica Allen in LaPorte in the parking lot of an Ace Hardware. The arrest report said that when officers made contact, she started to cry and said, “You guys don’t understand, he beats me.” She then allegedly confessed to killing Randy Allen, saying she shot him after he choked her with his hands.

“She then admitted she had to cut Randy’s legs off because she wasn’t able to fit him inside the tote,” police said, according to NWI. “She stated she panicked and did not know what to do after she had shot him. She stated she used an ax to cut his legs off.”

The report also said that the suspect’s children told police that the argument ensued after Randy Allen confronted their mother about a website she had allegedly been using, though no specifics about the site were provided.

Investigators said they found Randy Allen’s dismembered body in the tote bag that was located in one of the children’s closets.

The defendant now faces multiple felony charges, including murder, abuse of a corpse, altering a death scene, child neglect, and contributing to the delinquency of minors.