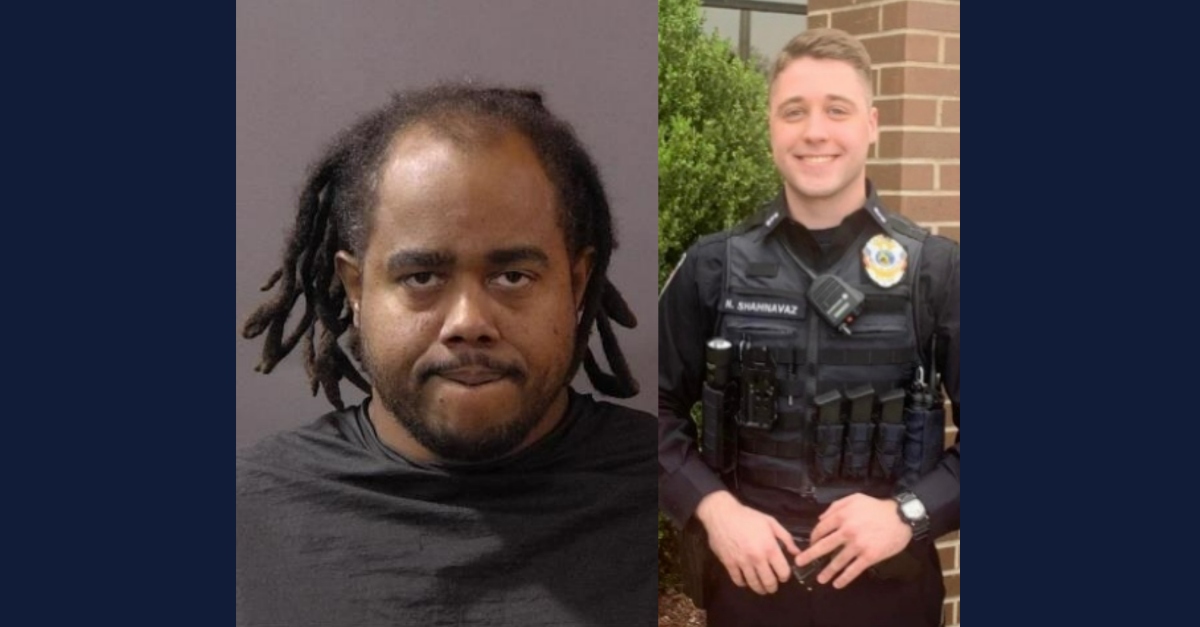 Authorities have formally charged the man accused of killing an Indiana police officer during a traffic stop.

Carl Roy Webb Boards II, 42, remains at the Hamilton County Jail on charges of murder, two counts of resisting law enforcement, and serious violent felon in possession of a firearm.

As police previously said in a press conference, Officer Noah Shahnavaz, 24, of the Elwood Police Department performed a traffic stop on a 2012 Buick LaCrosse at about 2 a.m. that Sunday morning. Boards allegedly opened fire.

“During that traffic stop, the driver [Boards] got out for an unknown reason and fired multiple rounds at the officer, striking him at least once,” Indiana State Police spokesman Sgt. Scott Keegan said.

Investigators found 36 rifle casings at the murder scene, documents said. Shahnavaz sustained two gunshot wounds to the head and several to the torso. His wounds were such that authorities could not determine how many times he had been shot. The officer’s gun was still in its holster when responding law enforcement found him, according to the affidavit. His emergency lights were still on, investigators said. Rounds had damaged the hood, windshield, and driver’s door of his vehicle, authorities said.

He was pronounced dead at St. Vincent Hospital in Indianapolis.

The suspect’s mother and father told investigators he spoke with them through FaceTime while he was fleeing law enforcement, according to the probable cause affidavit. His girlfriend also said he FaceTimed her during the chase.

Though authorities successfully deflated his tires with a device, Boards continued toward Interstate 69, Keegan said. Eventually, cops attempted a PIT maneuver, the sergeant said. After that failed, they tried again and succeeded. Boards’ vehicle came to rest against a guardrail, and he gave up without further incident, Keegan said.

After arresting him, authorities found a silver and black Taurus 9mm handgun on him, according to the affidavit.

Authorities said they looked into a barbershop the suspect “operated” in Marion, Indiana.

“We served that [search] warrant by searching the first floor of that building where Carl Roy Webb Boards operated his barbershop,” authorities sasid. “During the course of that search a loaded high-capacity magazine was located in an area in the back of the barbershop. This area appeared to be a room that Carl Roy Webb Boards II used to sleep and store personal items. The magazine appeared to be loaded with live 9 mm bullets and is used to carry a large number of bullets in a handgun.”

Authorities said they spoke with a man who rented an apartment upstairs from where Boards ran the business. He said that Boards discussed being a member of the Black Hebrew Israelites.

Though it is strictly unclear why Boards allegedly shot Shahnavaz, this man said that Boards recorded a song “making statements that if he was ever caught by police that he would kill them.”

As part of the charging enhancements against Boards, prosecutors said they are going after him as a habitual offender. Among other cases, he was arrested in 2006 after police said he shot at them during a traffic stop. Although he was acquitted of attempted murder, he was convicted of other charges including felony resisting law enforcement.

Shahnavaz was a 5-year military veteran and had served the Elwood community for 11 months, Keegan said Sunday. Law enforcement is helping raise funds on behalf of his family.

The foundation has been designated by the Elwood Police Department as the official fundraiser to accept monetary donations on behalf of the family.  Anyone who is wishing to donate can visit any First Merchant Bank by referencing the Indiana Fallen Heroes Foundation.

Donations can also be made by visiting  www.indianafallen.org  and clicking on “FALLEN HEROES” to select NOAH SHAHNAVAZ.