Idaho Teen Who Tried to Murder Family Members Regretted That He and Accomplice Didn’t Get ‘Confirmed Kills’: Police 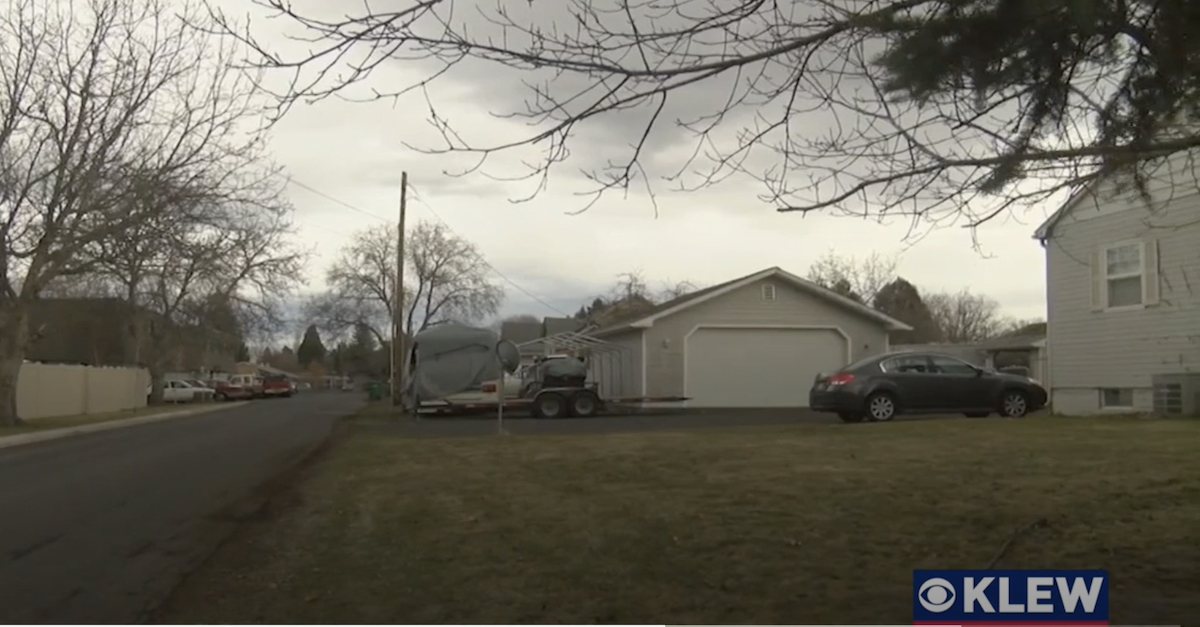 Outside the residence where Triston M. Arnzen and Chloe A. Marks allegedly shot two people.

A pair of middle school classmates in Idaho has been arrested and charged as adults after authorities say they intentionally shot an adult male and a juvenile female Sunday evening. Triston M. Arnzen and Chloe A. Marks, both 14, are facing first-degree attempted murder charges for allegedly shooting and critically injuring Arnzen’s stepfather and stepsister, police said in a press release.

According to the Lewiston Police Department, officers at approximately 5:24 p.m. on Sunday, Feb. 27 responded to a 911 call about shots being fired at a home located in the 600 block of Bryden Drive. Upon arriving at the scene, first responders found an adult male and a minor female, both of whom appeared to be suffering from gunshot wounds. The two victims were transported to St. Joseph Regional Medical Center for treatment with injuries police described as “serious, possibly life-threatening.” Responding officers located Arnzen and Marks “a short distance” from the scene of the shooting and took both into custody.

Two Lewiston 14-year-olds facing first-degree charges for allegedly shooting the stepfather and stepsister of one of them Sunday evening in the Orchardshttps://t.co/3ZW4Abg89l

Both teens reportedly agreed to speak with police without their attorneys or parents present. Arnzen reportedly told investigators that he regretted shooting his stepfather — but only because he believed that Marks’s initial shot was likely to be fatal. He added that “if he would have spent more time aiming at his stepsister” then he and Marks “could have both got ‘confirmed kills,'” the Tribune reported. Arnzen also reportedly said that his only regret in shooting his stepsister was that he failed to kill her.

Marks reportedly described Arnzen’s stepfather as “kind of a D” when speaking with detectives.

During the interviews, the two suspect minors allegedly divulged that they took a handgun belonging to Arnzen’s mother from the top of a refrigerator where she had stored the weapon. Arnzen allegedly grabbed the gun “when adults in the home were distracted,” police said.

Prior to getting their hands on the firearm, which was reportedly a pink and black 9mm Ruger LC9, investigators said the duo formed a plan to kill Arnzen’s stepfather and stepsister. The scheme was allegedly hatched approximately two hours before the actual shooting took place. Per the plan, Marks was allegedly charged with shooting George Hamblin while Arnzen was supposed to shoot Macayla Hamblin.

Arnzen allegedly continued to give chase but had no more ammunition left when he caught up to the wounded Macayla.  The authorities say he instead threw the gun at the girl out of anger.  He and Marks then allegedly fled the scene before police arrived.

Arnzen reportedly told police that he and Marks first decided to kill George Hamblin because the latter refused to allow them to go to the park earlier in the day. However, Arnzen allegedly revealed that his animus towards his stepfather and stepsister was deeper-seated than the events of that day.

Arnzen reportedly told investigators that George Hamblin was “verbally abusive” and would often make his mother cry, “which he did not like.”

In regards to his stepsister, Arnzen reportedly said that Macayla Hamblin “was always getting him in trouble and blaming him for stealing things that she had stole and placed in his room” and stressed his mother out.

Appearing in court on Monday, a judge reportedly set both teens’ bond at $500,000. Judge Karin Seubert reportedly appointed the law firm of Magyar, Rauch & Associates to represent Arnzen and attorney Rick Cuddihy to represent Marks in the case. Neither the firm nor Cuddihy immediately responded to messages from Law&Crime.

Despite being charged as adults, Seubert allowed both teens to be housed at the Lewiston Juvenile Correction Center, noting that both would be relegated to solitary confinement if they were detained in county jail. They are both scheduled to appear in court again for a preliminary hearing on March 9.

The teens, who are reportedly both students at Sacajawea Middle School, are each facing up to 15 years in prison if they are found guilty.