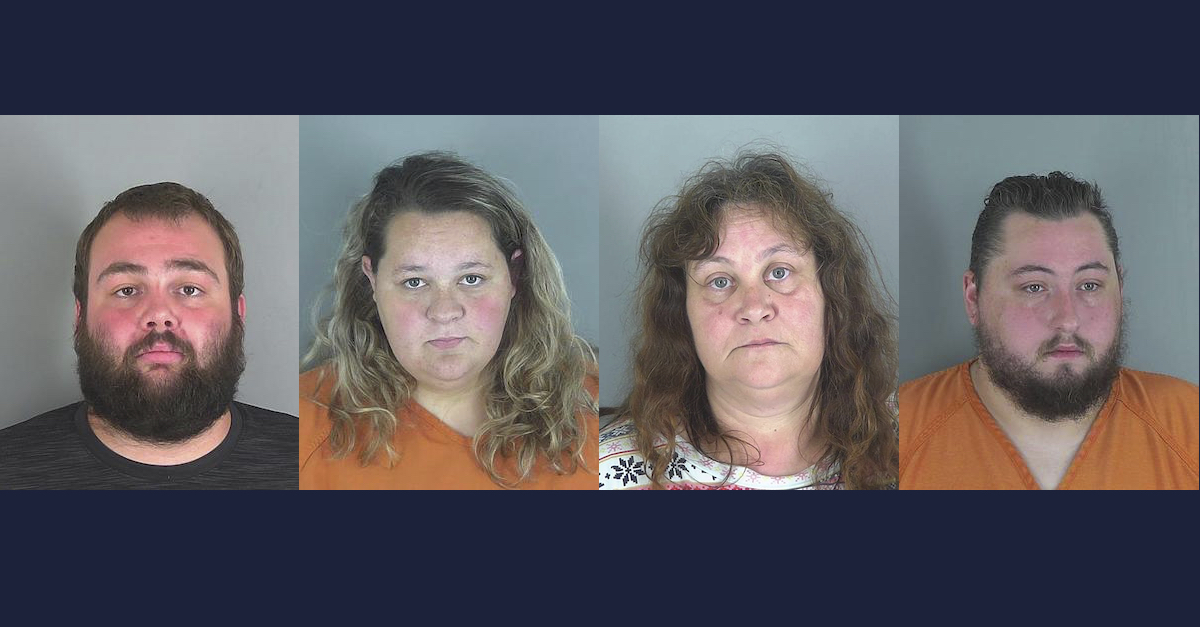 A quartet of adults in South Carolina has been charged with nearly 50 separate child abuse-related offenses, including particularly horrific allegations of forcing a girl to eat cat feces and take laxatives she was told were gummy candies.

Deputies originally went to a residence in Wellford, South Carolina on Sept. 2 in response to a call from the Department of Social Services for assistance with a child abuse investigation, the sheriff’s office said. The child welfare agency was alerted to the possibility of child abuse by an anonymous source.

“Upon arrival, deputies were informed by the DSS caseworker that she had been out to the home several previous times to investigate, but the adults at the home had hidden the victim from her,” Bobo said.

Upon arrival, sheriff’s deputies found four adults and four children. According to the SCSO, the oldest child had “a noticeable limp and temporary tattoos covering multiple visible bruises on both legs.”

The family allegedly explained to sheriff’s deputies, in separate interviews, that they had recently moved down south from Vermont. The stepmother allegedly admitted to putting makeup on the child’s legs in an effort to cover the bruises once child welfare agents started visiting the residence.

The children were then taken into emergency protective custody by the DSS, the sheriff’s office said, while the oldest boy was transported to a hospital “due to the extent of the bruising and blood loss concerns.”

“The victim was interviewed at the hospital by medical personnel and one of our SVU investigators, where more detailed information was discovered,” Bobo said. “After that initial medical exam, the victim was evaluated again by a forensic doctor later last month, who stated the victim clearly met the criteria for a medical diagnosis of child torture. In forensic interviews at the Children’s Advocacy Center, the victim gave detailed and credible disclosures of multiple instances of abuse by various means from all four adults in the home.”

During a shocking and graphic bond hearing on Friday telecast by Columbia, South Carolina-based NBC/CW affiliate WIS-TV, the victim was identified as an 8-year-old girl.

“This is the best day of my life,” she allegedly said as she was rescued from the house of horrors, a solicitor told a judge.

The county attorney told the court that adults in the residence made the girl eat “cat poop and cat treats” by her stepmother.

She was also allegedly made to consume gummy laxatives “she thought were candy” and wear pull-up diapers by her father. Tatro allegedly once told his daughter that he wished the girl had been “vacuumed out before she was born” and that he “wished he could kill her and get away with it,” the prosecutor said.

More direct physical abuse is also alleged to have occurred – including being sat on; being beaten with boards, cords, and frying pans; being forced to stand in a garbage can; being placed in a “hypothermia bath”; being forced to stay in the closet for long periods of time and sleep there; and being forced to kneel inside wooden crates.

The girl was not allowed to use the bathroom, the solicitor added, saying she was forced to clean up her own waste by the adults and at least once had her face rubbed in the carpet when she failed to clean up to adults’ standards.

The next court date for the defendants is currently slated for Dec. 8. Each of the four were assessed cash surety bonds of various amounts – a mandatory outcome under the law because the allegations against them are not considered violent crimes in South Carolina.