‘For The Rest of My Life I Will Be Haunted’: Judge Slams Man Who Represented Himself, Admitted At Trial He Killed His Wife 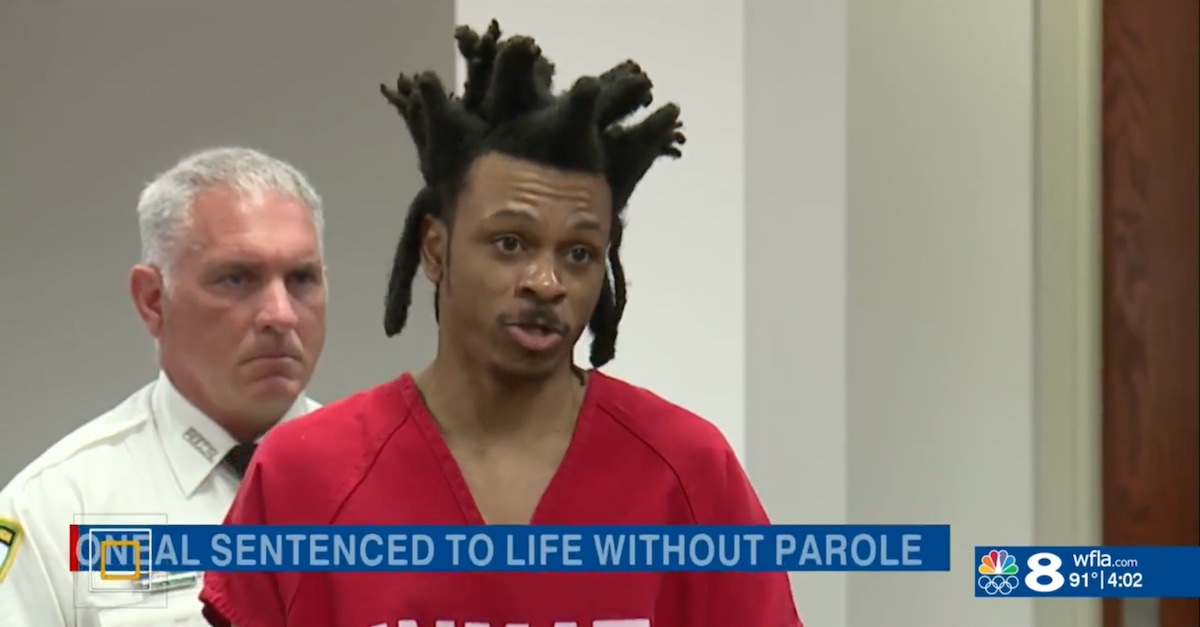 A Florida man who was found guilty of brutally murdering his girlfriend and daughter then attempting to light his son on fire was sentenced to three consecutive life sentences plus 60 years on Friday, multiple local news outlets reported.

Ronnie Oneal III made national headlines when he chose to represent himself at trial and repeatedly used the opportunity to yell at jurors, questioned his own 11-year-old son about the night he stabbed him, and ultimately confessed to the 2018 murders of his girlfriend Kenyatta Barron, 33, and their disabled daughter Ron’Niveya Oneal, 9. A jury last month convicted the defendant of two counts of murder and one count of attempted murder.

A panoply of the victim’s family and friends addressed Oneal and the impact his actions had on their lives during an emotional sentencing hearing.

“He done what a coward would do,” Barron’s mother Carrie Lloyd told the court.  She also said Oneal stole “angels” from their family, according to a report from local NBC-affiliate WFLA. Lloyd further told Judge Michelle Sisco that she was unhappy with the verdict and believed that Oneal should have been given the death penalty.

“I’m not pleased with what the verdict was and I wish you could overturn it and give him what he’s rightfully due,” Lloyd said.

Oneal beat Barron, killed her with a shotgun, and used a hatchet to slaughter Ron’Niveya, who was autistic and nonverbal, before setting fire to their home. During closing arguments last month he stated, “I did kill Kenyatta Barron, but I want you to tell it like it is if you’re going to tell it.”

Oneal on Friday remained steadfast that he somehow did nothing wrong.

Judge Sisco, who threatened to have Oneal removed following his outburst, then had the convicted murderer stand and face her so she could admonish him as she handed down his sentence.

“Nineteen years I’ve been at this job; I’ve seen human beings killed at the hands of others in every way imaginable. This is the worst case I’ve ever seen as far as the facts go,” she said, according to WTVT.

“When the person from the fire department testified and said he retrieved the body of Ron’Niveya Oneal from the home and all he could do was sob, it took every ounce I had not to start sobbing too, because there’s no way any person with any feeling could’ve witnessed or seen the photos of what occurred that night and not be haunted for the rest of your life,” Sisco said. “I know I will be, for the rest of my life I will be haunted by what I saw as far as the evidence, and just the abject cruelty of it all.”

Judge Sisco particularly focused on Ron’Niveya, the daughter who was non-verbal and on the autism spectrum. Oneal killed her using a hatchet.

“She couldn’t scream, she couldn’t run away, she witnessed what you did to her mother,” Sisco said, becoming visibly emotional as she spoke. “She knew and the horror that that child suffered, and she already had a life where she was born with challenges, regarding her physical and her mental disabilities. But the pain and suffering that she suffered that night at your hands? Unspeakable.”

Judge Sisco then sentenced Oneal to three terms of life in prison, running consecutively, plus 60 years, meaning he will spend the rest of his life behind bars with no chance for parole.

The defendant spent a considerable amount of time writing letters to the judge while he was behind bars awaiting trial.  Read some of the case file below: