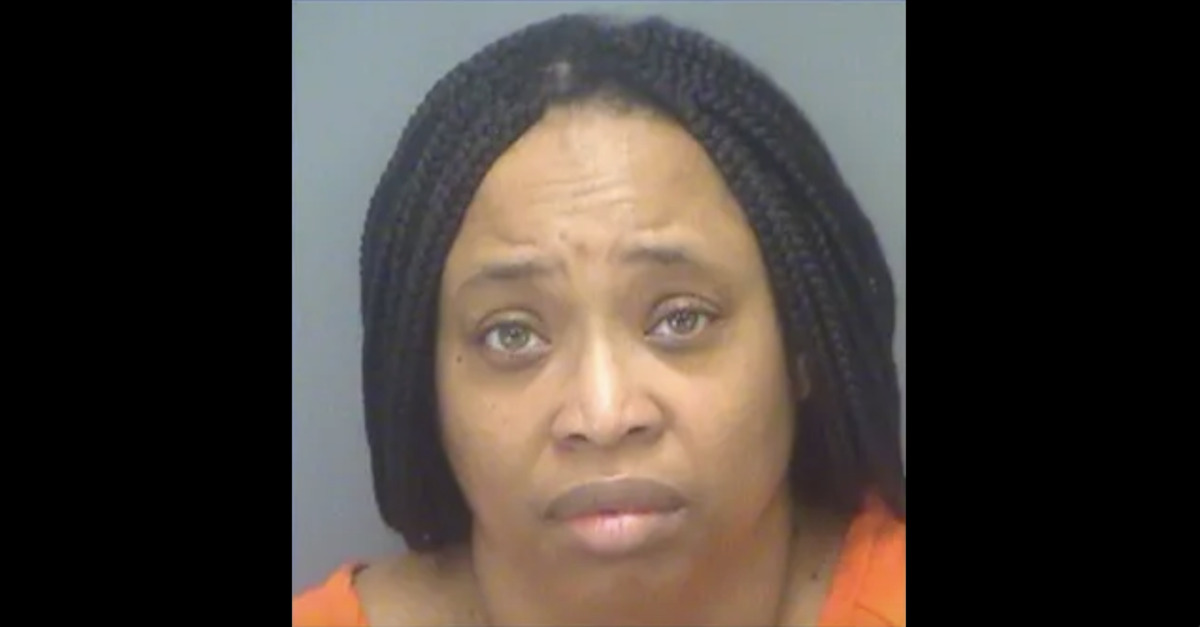 A Florida woman was charged late last week in a murder-for-hire plot that allegedly sought to extinguish an old flame’s new spouse.

De Anna Marie Stinson, 50, stands accused of solicitation to commit a crime of violence and murder for hire, in violation of federal law. If convicted as charged, she faces the prospect of 10 years in prison.

The U.S. Department of Justice announced the defendant’s arrest on Sept. 24, the same day a court in the Middle District of Florida authorized an arrest warrant. Federal court records show that Stinson was criminally charged via federal criminal complaint on Sept. 22.

In the complaint, FBI agent Julio Fuentes alleged that Stinson visited and attempted to purchase the hit on her ex-romantic partner’s new spouse via an unidentified website on the dark web that advertised murder-for-hire services under the tagline: “If you are looking to have someone murdered, beaten, kidnapped, you have arrived at the best place.”

The name of the website was not contained in the document.

On the website’s main forum page, authorities allege, was a thread posted by Stinson titled “Florida Job” with an original post that read: “I am looking for a quick hit in southern Florida? Is anyone available?” The FBI allege that “a hitman on The Website” responded with “Contact me” less than a week later–with FBI agents taking a screenshot of the “message thread to preserve it.”

While posting semi-anonymously, the FBI obtained information about the user who started the thread from someone with “access to data stored” on the website that corresponded to the username in question. Such information included their “apparent subscriber information, payment and transaction details, [Bitcoin] addresses associated with” the username the website and the user’s “chat communications,” according to that court filing.

From July 15 through July 21, the FBI alleges, the same username detailed their requested Sunshine State hit in the following ways:

Order #1: Do not do at the home. Any place else is fine. Need completed during July – preferably between July 5th – 11th.

Order #2: Do not do at the home. Any place else is fine. Need completed during July. Bonus if completed by July 31st.

Order #3: Do you have a preferred escrow service? I am ready [sic] proceed. Can we get this done by month end?

Order #4: Do you have a preferred escrow service? I am ready to proceed. Can we get this done by month end? The escrow account is set up on Coinsavr. Please advise as to your username.

Order #5: Do not do at the home. Any place else is fine. Need completed during July. Bonus if completed by July 31st.

Over the course of those five orders, the FBI alleges, Stinson also made five Bitcoin payments totaling just over $12,000 at the time sent for the purpose of killing the intended target.

The hit, however, never occurred. The above information–along with increasingly desperate messages from the purchaser to “vendors who held themselves out to be hitmen”–was provided to the FBI, authorities say.

“I haven’t heard from the vendor,” the username affiliated with Stinson allegedly complained in one such message. “Please reassign the job to someone who has a history of getting jobs done. Let me know who youve [sic] reassigned the job to. I need this done ASAP.”

A late July investigation eventually connected Stinson’s virtual currency exchange account to “some of the BTC addressed used to pay The Website” for the requested hit, according to the complaint.

Later, the FBI says it “staged photographs” of the intended victim as they were exiting their residence in southern Florida. In late August, an undercover law enforcement agent contacted the defendant via WhatsApp and impersonated the hitman she had allegedly “contracted with,” according to the court filing.

In response to a request from the fake hitman to confirm the target based on the photographs, Stinson allegedly replied: “Looks right.”

During a recorded phone call allegedly made with the defendant, she expressed a reticence to send a final payment of $350 via Western Union because she didn’t want those funds “traced” and opted for the easily-traceable Bitcoin network instead.

Stinson is currently being detained in the Pinellas County Jail.