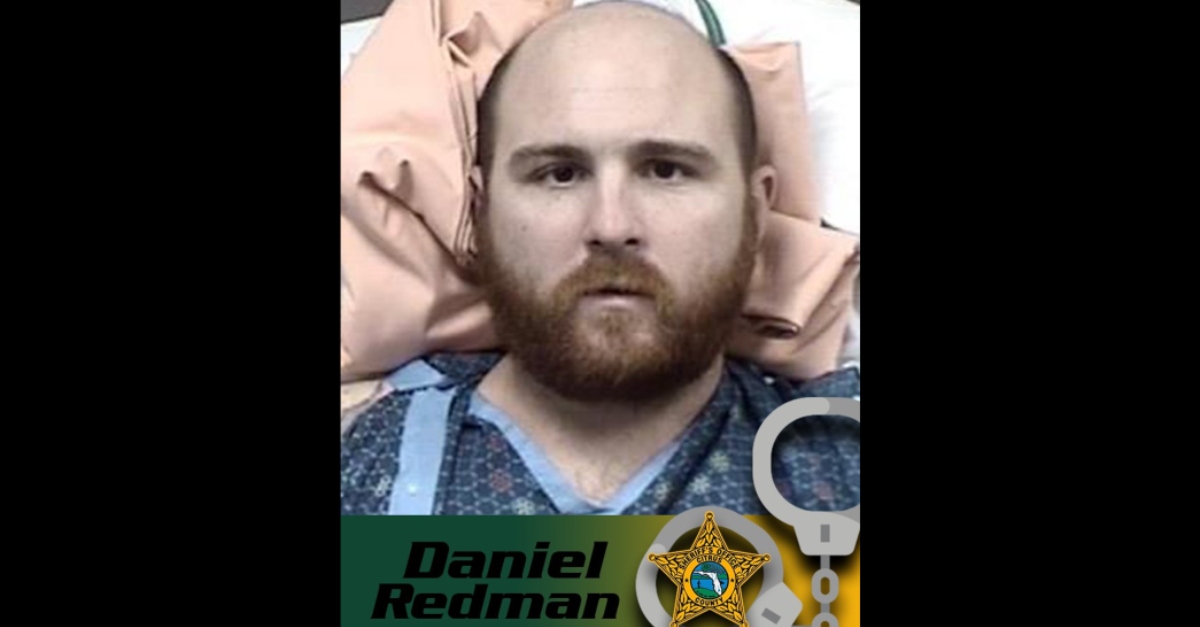 A Florida man was just arrested for allegedly shooting and killing his younger brother amid a violent history.

Daniel Arthur Redman, 29, murdered Brenden Ray Redman, 19, last month, but the suspect had been in the hospital because deputies shot him when he took another person hostage, the Citrus County Sheriff’s Office said on Friday.

Officials said this tragedy happened in a home on East Dawson Drive in the city of Inverness. Authorities previously said it was in an East Dawson Drive address that Redman previously attacked the young man, their grandmother, and step-grandfather. The 29-year-old just got out of prison less than a week before allegedly killing his brother.

The Citrus County Sheriff’s Office did not immediately respond to a Law&Crime request for more information.

Deputies said they responded to the home back on Jan. 14, finding Brenden with what turned out to be fatal gunshot wounds. He was pronounced dead after officials took him to the hospital.

“Witnesses told deputies the suspected shooter tried to break into their home before he fled on foot,” officials said.

Deputies tracked down defendant Redman to a motor home about a quarter-mile away.

“Upon contact, the suspect was observed holding another victim, with obvious injuries, as hostage,” authorities said. “Deputies gave verbal commands for the suspect to release the hostage, which he eventually complied with.”

“This kid comes running around my trailer,” she said of defendant Redman in a Citrus County Chronicle report. “I heard rummaging going on outside. He was panicking, I guess, and then he came to my door and shoved it open. I was in the living room, running around panicking. Then he went to the back of the room, and then that’s when I said, ‘Who are you?’ Then he said, ‘Shhhh.'”

In her account, Redman started looking through the window. He was sweating and breathing hard. Potulsky stood up from bed, telling him he could not be there.

Redman punched her in the face three times, put her on the floor, and placed his hand over her face for minutes, Potulsky said.

“I’m praying to God I don’t die,” she added. “When he had has hands over my mouth, I thought he was trying to suffocate me or break my jaw.”

Deputies said they told Redman to show them his hands after he released the hostage, but he refused to show his hands and instead reached behind his back towards his waistband.

“After failing to comply with verbal commands, fearing for the safety others, the suspect was shot one time,” deputies wrote.

Redman is now charged with murder in the first degree with a firearm; kidnapping; burglary of an occupied conveyance with a battery; shooting at, within, or into an occupied dwelling; and possession of firearm by a felon.

As the last charge indicates, this would not be Redman’s first time in prison. Online records show he left custody on Jan. 9, just five days before he allegedly killed Brendan.

He was in prison for aggravated assault of a person 65 years of older. According to the arrest affidavit, Redman complained on May 14, 2019, about someone shooting in the back of the house. His step-grandfather, a 68-year-old double amputee, told him they heard gunshots behind the house all the time, and told him not to worry about it. But Redman “went ballistic” and attacked him, according to officials. He punched the old man, tripped him and kicked him in the face, leaving him with swollen eyes, bleeding profusely in the face, and with a large gash over the left eye.

Authorities said that the suspect shoved his brother Brendan, then a juvenile, in the face, and their grandmother against a wall when both tried to call law enforcement. He took their cell phones.