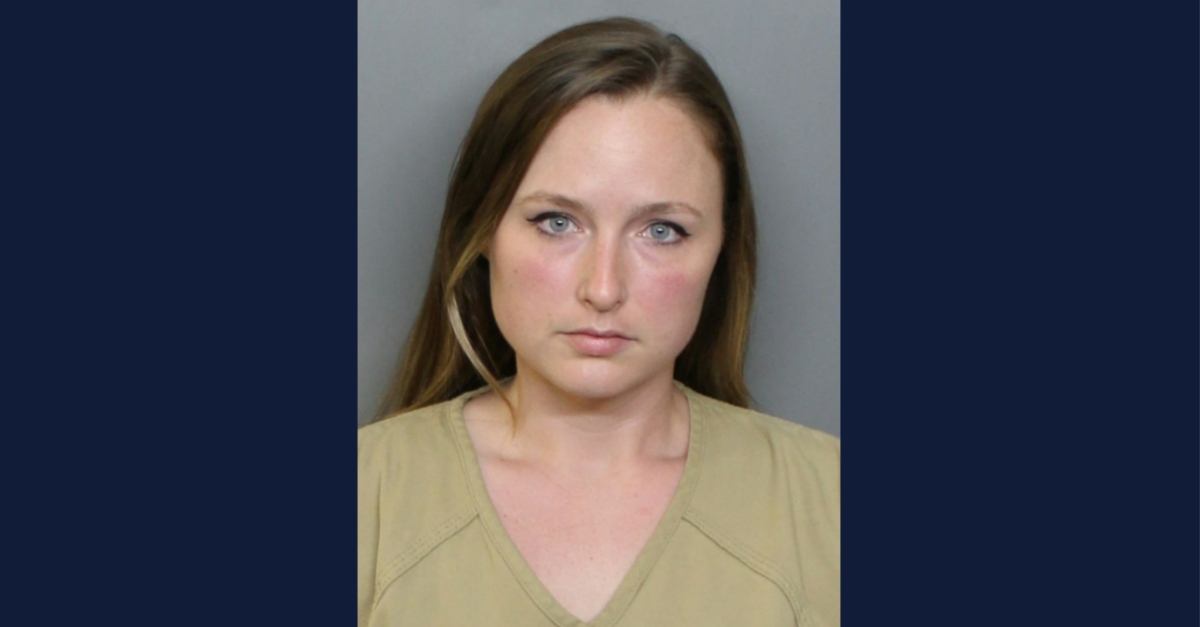 An English teacher was arrested this week for allegedly hiding a boy considered “missing/endangered.” Kelly Joyce Simpson, 31, allegedly admitted she saw the Charlotte County Sheriff’s Office post regarding the missing juvenile, but she still picked him up from another residence and did not report him as recovered, deputies said in an affidavit for probable cause.

“While investigators were attempting to locate a missing juvenile who was reported by his parents on August 12, 2022, information they received led them to the home of Kelly Simpson (04/08/1991),” deputies said in a press statement.

Investigators said they discovered the boy inside Simpson’s home.

The search started last Friday. According to the heavily redacted affidavit of probable cause, patrol responded that day to a home regarding the report of a “missing/endangered” juvenile. What is clear is that someone left the scene on foot after an argument about a person stealing $100.

The missing boy did not have his cell phone or medication, so he was considered “missing/endangered.” Neither did he allegedly have a bank card, other electronics, mode of transportation or contact. His only social media was a Snapchat account, but that featured no recent activity, authorities said. He allegedly left no note of his whereabouts. 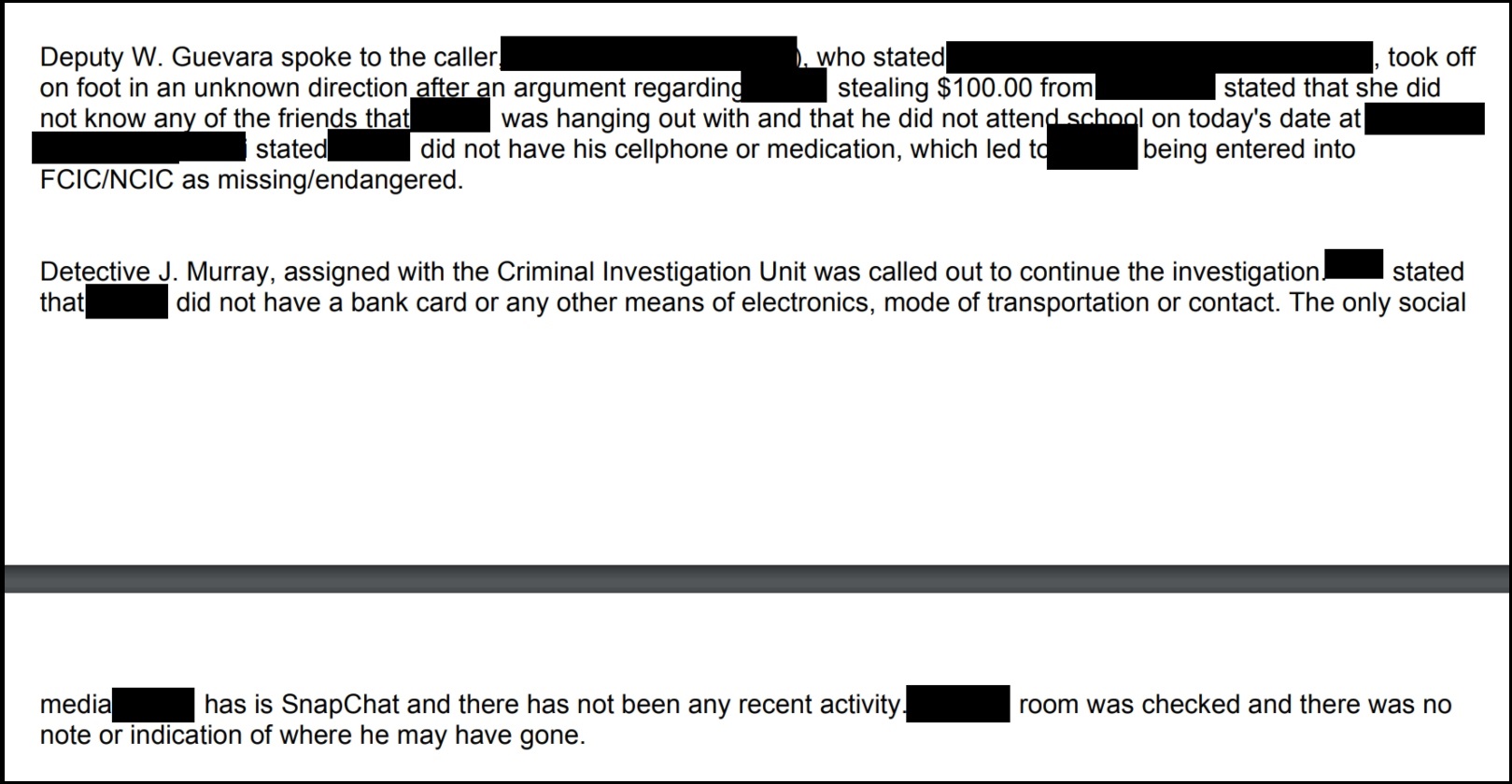 According to the affidavit, an investigator got a message from someone stating the boy was at an address in the city of Punta Gorda. Deputies spoke to someone who lives there. That person said the boy stayed at the home for the past several days, but “a female named Kelly” picked him up on Monday night.

Citing a statement from a person, investigators determined this was Simpson.

Investigators arrived at her home in the city of Port Charlotte. Simpson allegedly acknowledged knowing the boy, but she denied he was there.

“I asked based off the leads showing that he could be at her residence, if I could search her house for [REDACTED] and she replied that she did pick him up from Punta Gorda and then dropped him off at a gas station,” deputies said. “I asked again if I could clear the home and she stated no, because [REDACTED] was not there. I explained to Kelly if [REDACTED] is not there then it would not take long for us to clear the home and then she asked what happens if she does not allow us clear the home.”

Authorities said they finally convinced her to let them in.

“Sergeant C. Kearney for the Criminal Investigations Unit proceeded into the conversation advising Kelly that if later on the investigation it was discovered that [REDACTED] was in the home that she could be charged with a crime,” deputies said.

Simpson allegedly stopped speaking, then said she would go inside and have him step out. She went inside. The boy exited about 10 minutes later. According to deputies, he said Simpson picked him up on Monday night and he stayed the night at her home.

The boy agreed to provide investigators a sworn recorded statement saying that Simpson knew he was considered missing because he showed her a picture on Monday of the BOLO post the sheriff’s office put out on him.

“Kelly responded to [REDACTED] that they would handle it the next day,” deputies said. 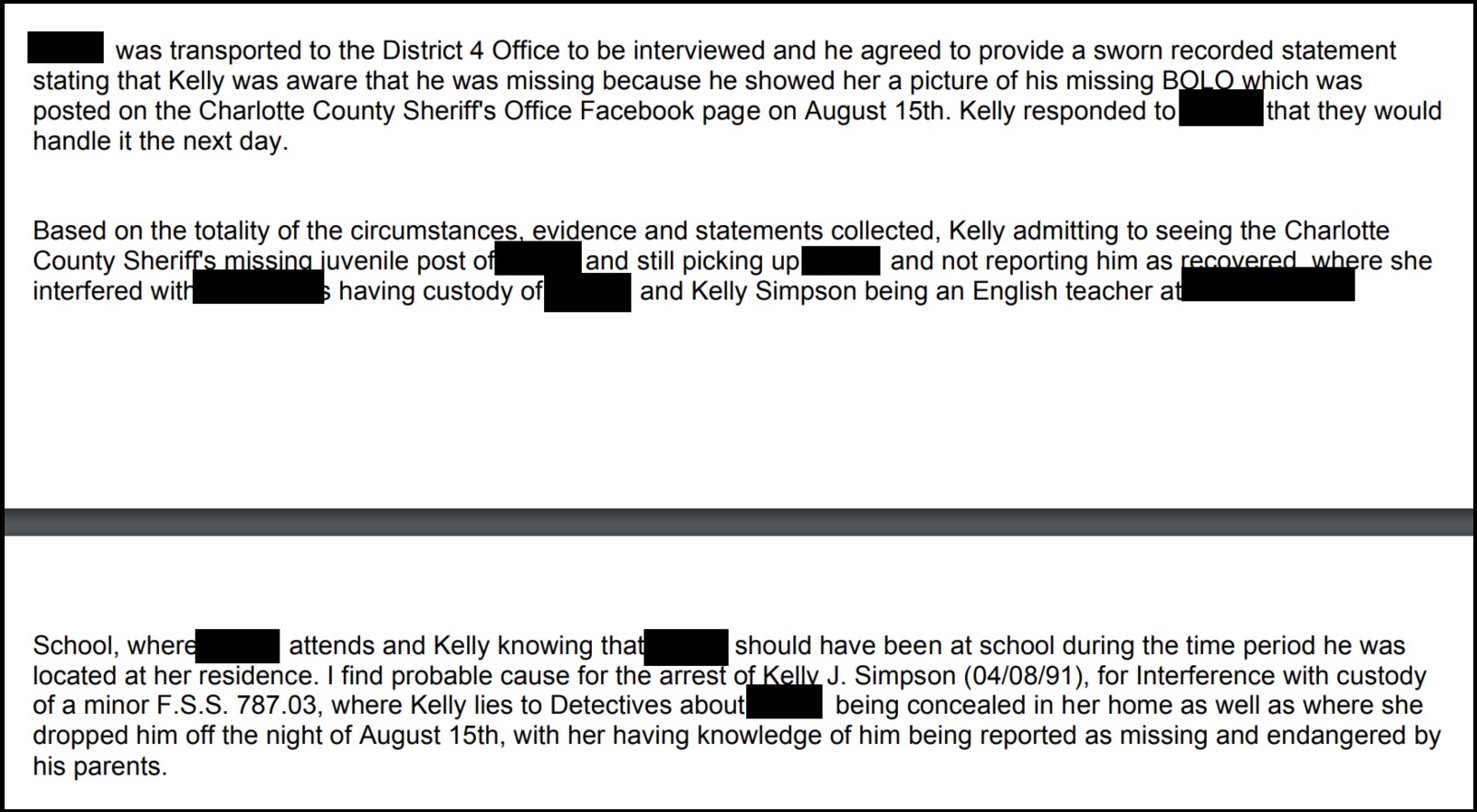 Simpson was arrested Tuesday for interference with custody of a minor. She posted a $5,000 bond on Wednesday, online records show.

She is represented by the Office of the Public Defender in Charlotte County, but a staffer there told Law&Crime they do not comment on pending cases.

This is an ongoing investigation. Anyone with information is asked to contact the Charlotte County Sheriff’s Office at 941-639-2101.