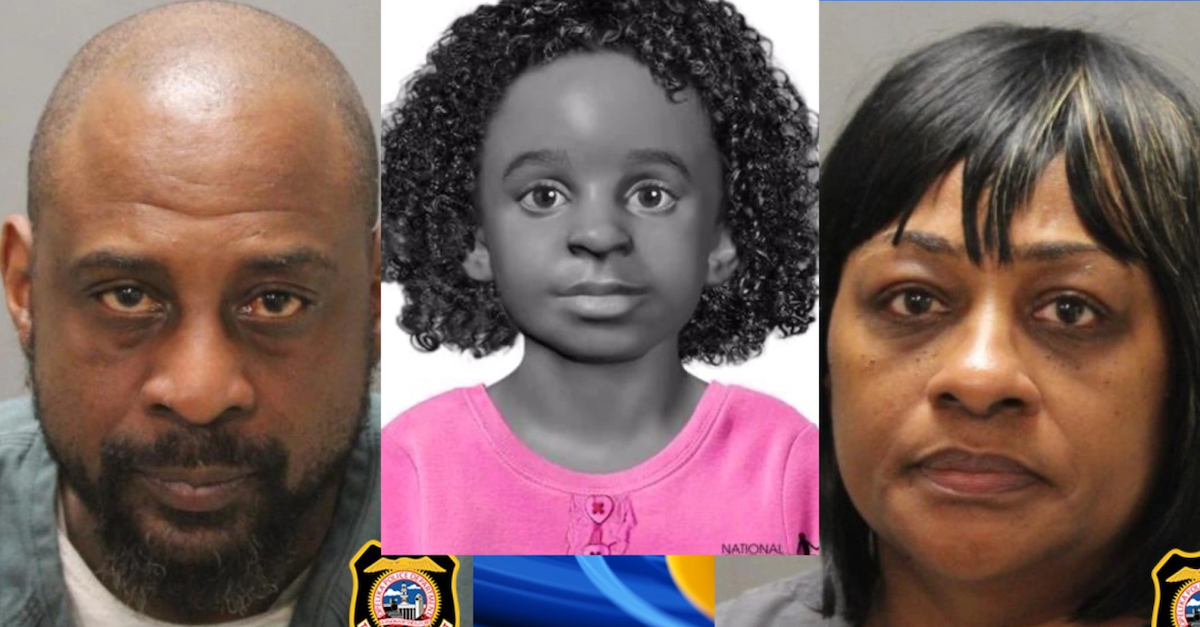 After more than a decade of investigating, authorities in Alabama have identified the little girl whose skeletal remains were discovered in an Opelika trailer park and charged her biological father with brutally killing her. Lamar Vickerstaff Jr. was taken into custody on Tuesday and charged with one count of felony murder in the death of Amore Joveah Wiggins, also known as “Opelika Baby Jane,” authorities announced.

His wife, Ruth Vickerstaff, was also arrested and charged with one count of failure to report a missing child.

According to a press release from the Opelika Police Department, the Baby Jane case began when officers on Jan. 28, 2012, responded to a 911 call about human remains being found at a trailer park located in the 1700 block of Hurst Street. Upon arriving at the scene, first responders located the skull of a small child in the yard of a residence. The rest of the child’s remains were discovered in the the woods behind a trailer on the adjacent lot, along with a small “bundle of curly hair” and a pink child’s shirt, police said.

A medical examiner at the FBI Laboratory in Quantico, Virginia, concluded that the remains likely belonged to a Black female between the ages of four and seven. A subsequent autopsy determined that the child had sustained 15 individual bone fractures prior to her death, including her skull, arms, legs, shoulders and ribs. All of the fractures were found to be caused by “blunt force trauma.”

The autopsy further revealed that the death of the child, who affectionately became known as “Baby Jane Doe,” was likely malnourished and blind in her left eye due to a fractured eye socket. Her death was ruled a homicide and officials estimated it likely occurred between the summers of 2010 and 2011.

Investigators at the time tried to develop a DNA profile for the child but could not “due to the condition of the remains,” police said. But with advancements in technology, investigators were able to extract DNA from the scalp of the skull, enabling them to create a comprehensive genealogical profile, which was then uploaded to a database and used to identify biological relatives.

Based on the genealogical profile, investigators in October 2022 were able to identify Baby Jane’s father as Vickerstaff, who they say was born and raised in Opelika before enlisting in the U.S. Navy. Investigators in December 2022 traveled to Jacksonville, Florida, where Vickerstaff was stationed at the time and notified him of his daughter’s death.

“During the meeting Mr. Vickerstaff did not provide investigators with any information on the identity of Jane Doe,” said Opelika Police Chief Shane Healey said during a Thursday press conference. “Detectives then met with Mr. Vickerstaff’s wife, Ruth Vickerstaff. Mrs. Vickerstaff, who has been married to Lamar since May of 2006, advised detectives she did not know his daughter or who may be the mother of Jane Doe.”

Later that month, detectives met with 37-year-old Norfolk, Virginia, native Sherry Wiggins, whom they had identified as Jane Doe’s mother. Wiggins confirmed that she’d given birth to a baby girl in January 2006 named Amore Joveah Wiggins.

Police were unsure as to why custody of Amore was given to Vickerstaff, Healy said.

Detectives say they reached out to the school boards and pediatric clinics in multiple states where Lamar and Ruth Vickerstaff lived and discovered that the couple had never enrolled the child in school or reported her missing. The case was then brought to the Lee County District Attorney’s Office where prosecutors decided there was enough evidence to charge Mr. and Mrs. Vickerstaff in Amore’s death.

Investigators emphasized that the investigation into Amore’s death remains open and asked that anyone who knows relevant details about the case to contact OPD’s Detective Division at (334) 705-5220.

The couple both appeared in court on Wednesday and were ordered held without bond. They have waived their extradition and police say they have 10 days to pick them up from detention in Florida.