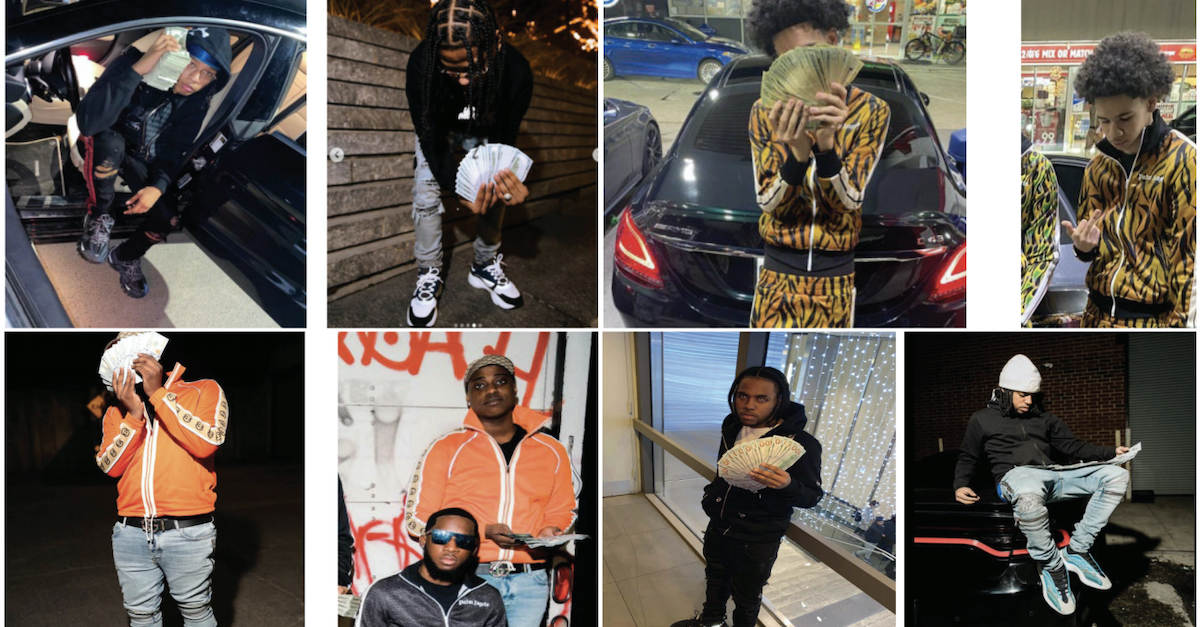 One held a stack of dollar bills on his shoulder high enough to resemble a boom box. Two others spread out the cash like fans large enough to cover their faces. Another just flaunted the money outright. Federal prosecutors claim that these are the brazen images of teens and twenty-somethings who bilked millions from COVID-19 relief.

Ranging between the ages of 18 and 25, Brooklyn men Bryan Abraham, Carlos Vazquez, Angel Cabrera, Armani Miller, Johan Santos, Gianni Stewart, Andre Ruddock and Seth Golding were charged with the alleged scheme on Tuesday. Miller, 24, and Santos, 19, remain at large, and the rest were arrested and then scheduled to appear before U.S. Magistrate Judge Ramon E. Reyes within hours.

The Eastern District of New York’s Acting U.S. Attorney Mark Lesko wrote in a statement that the young men “not only fraudulently obtained $2 million in pandemic-related unemployment benefits using information from third-party victims, they audaciously displayed the proceeds of their fraud—large amounts of stolen cash—on social media.”

New York State administers unemployment benefits through the Department of Labor, which gives struggling families multiple options for how to collect CARES Act money. Claimants must first provide the agency with information like their names, dates of birth and Social Security numbers. Then, if accepted, they must establish their continuing eligibility to receive benefits. Payments could be made via direct deposit to bank accounts but the Department of Labor also partnered with KeyBank to deliver the unemployment benefits on their debit cards.

Prosecutors claim that the young men cheated this system between June 2020 and April 2021.

Arrested while exiting KeyBank on Aug. 27, 2020, Abraham, 18, had eight of these KeyBank debit cards issued in third party names and $9,470 in U.S. currency, and he was arrested again less than a month later with 14 KeyBank cards and more than $20,000, according to his complaint.

The other young men also allegedly had dozens of KeyBank cards among them in other people’s names, with large amounts of cash, prosecutors say.

USPIS Inspector-in-Charge Philip Bartlett held out their cases as examples of people “scamming the system.”

“Unfortunately, as the government rolled out various CARES Act programs, fraudsters were ‘At the Ready’ to take full advantage of these programs through a variety of fraud schemes, ripping off the American public of millions in taxpayer dollars, and clogging the system for those who honestly are in need,” Bartlett wrote.

The Department of Labor’s Commissioner Roberta Reardon said that the alleged scheme targeted a program designed to help the vulnerable.

“There is never an excuse to knowingly commit fraud and steal from a system that was designed to help New Yorkers in a time of need,” Reardon wrote in a statement. “However, it’s even more despicable when these thieves steal a lifeline from New Yorkers in the midst of a public health pandemic.”

“The Department of Justice will use every available federal tool—including criminal, civil, and administrative actions—to combat and prevent COVID-19 related fraud,” Garland wrote, announcing that nearly 600 defendants have been charged to date with crimes involving over $600 million in 56 federal districts around the country.

That was before its establishment, according to Garland’s three-page memo announcing it.

Read their criminal complaint below:

(Photos from the Department of Justice’s criminal complaint)