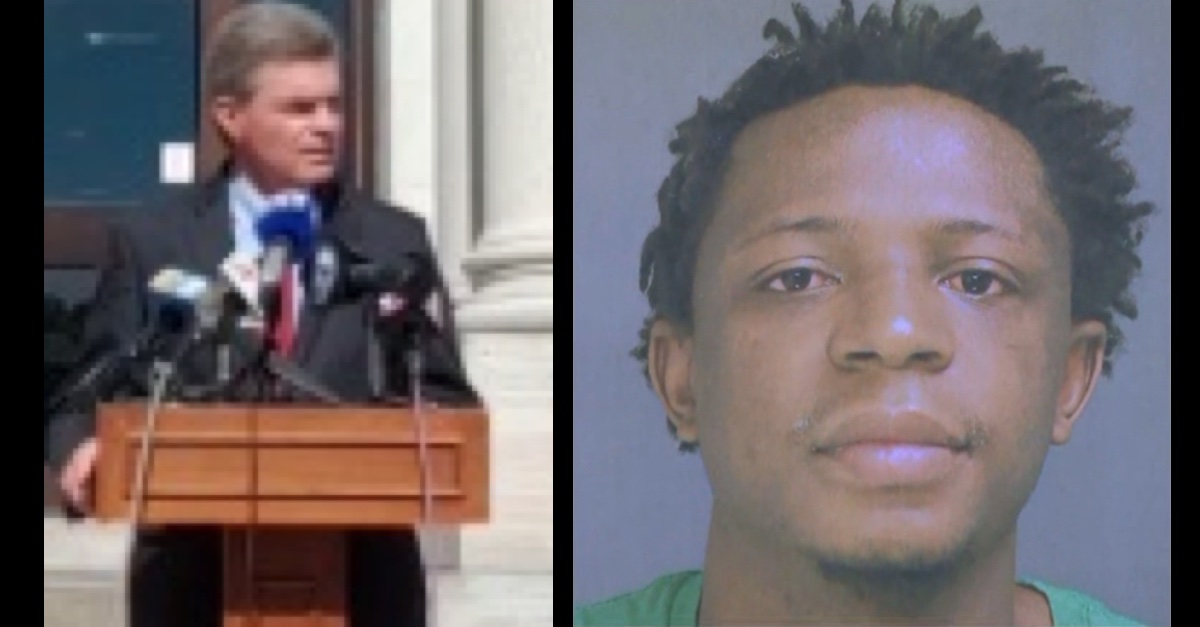 The details of an alleged attack that occurred on a Philadelphia elevated train last week were horrifying: a man sat down next to a woman, repeatedly tried to touch her despite her multiple attempts to push him away, and then ultimately raped her — all while bystanders failed to intervene, choosing instead to record the attack.

“I can tell you that people were holding their phone up in the direction of this woman being attacked,” Southeastern Pennsylvania Transportation Authority (SEPTA) Police Chief Thomas J. Nestell III said at a news conference in the days following the attack.

“I’m appalled by those who did nothing to help this woman,” Timothy Bernhardt, the superintendent of the Upper Darby Township Police Department, also said at the time. “Anybody that was on that train has to look in the mirror and ask why they didn’t intervene or why they didn’t do something.”

Now, however, that narrative has been called into question.

According to Delaware County District Attorney Jack Stollsteimer, the initial reports of bystanders recording the attack are not accurate.

“There is a narrative out there that people sat there on the El train and watched this transpire and took videos of it for their own gratification,” Stollsteimer said Thursday. “That simply is not true. It did not happen. We have security video from SEPTA that shows that is not the true narrative.”

Stollsteimer said that security video shows two passengers holding up phones toward the assault, and that one of those people provided video to authorities as part of the investigation, the Associated Press reported.

“People get off and on at every single stop,” Stollsteimer also said, according to reports. “That doesn’t mean when they get on that they see people interacting that they know a rape is occurring.”

Andrew Busch, a spokesperson for SEPTA, told Law&Crime that the transportation authority is “working closely” with the district attorney’s office on the case — but didn’t have any comment on Stollsteimer’s recent revelations.

“We continue to urge passengers to call 911 if they see something happening that they think isn’t right, or to use the emergency call buttons on vehicles and at stations,” the spokesperson said in an email.

The initial reports about the attack sparked a potential legislative response.

State senator James Brewster, a Democrat representing parts of Allegheny and Westmoreland Counties, announced his intent to propose legislation that would impose a duty on bystanders to report wrongdoing.

“Please join me in sponsoring legislation that imposes an affirmative duty on any person to provide reasonable assistance to another person who is subject to serious physical harm,” said Brewster’s memorandum, filed on Oct. 19. “The legislation will require, at a minimum, that a person contact emergency response personnel when they see another person who has suffered physical harm at the scene of an accident or a crime.”

Generally speaking, the law has traditionally imposed no duty to rescue strangers and no duty to call 911 on their behalves — though there is a growing list of exceptions which vary by state.  Generally, the exceptions apply in cases of special relationships, such as parent/child or caregiver/recipient, or where a certain type of crime is involved, such as a sexual battery (in Florida, for instance) or child molestation (think of the so-called “mandatory reporting” laws which require individuals to report cases of abuse.)  Some states, such as Vermont, Rhode Island, and Minnesota, have passed generalized rescue laws which are contrary to the national trend.  At least three other states — Hawaii, Washington and Wisconsin — require random passersby to report crimes to authorities, according to a 2017 analysis by the Pew Charitable Trusts.  The Pew analysis said that few people were prosecuted for failing to report general criminal activities but predicted that more people might be given the modern penchant for posting crime scene videos on social media.

The 2017 Pew analysis called laws such as the one proposed in Pennsylvania so-called “bad Samaritan” laws.  University of Houston Law Center Prof. Zachary D. Kaufman even keeps a database of such laws, both proposed and passed.

Critics cited by the Pew analysis said that the law has been hesitant to compel rescues because they can make dangerous situations even more deadly.  Florida failed to pass a broad “duty to provide emergency assistance” law in 2018.

Brewster cited the Minnesota statute as an example of a law that imposes upon bystanders a duty to help someone in danger. Pennsylvania’s “good Samaritan” statute already limits liability for people who in good faith intervene in a dangerous situation to try to help, but the current Keystone State law does not impose a duty of forced assistance or rescue. Minnesota’s law does.

Brewster’s office did not immediately return Law & Crime’s request for comment on the status of his proposed legislation.

According to court documents, Fiston Ngoy, 35, is accused of raping the victim on the SEPTA train, who has not been publicly identified. Ngoy reportedly told police he had seen the woman before and that the sexual encounter was consensual, according to the AP. The woman said that she had never met Ngoy, and that she had not given him permission to touch her, the AP reported.