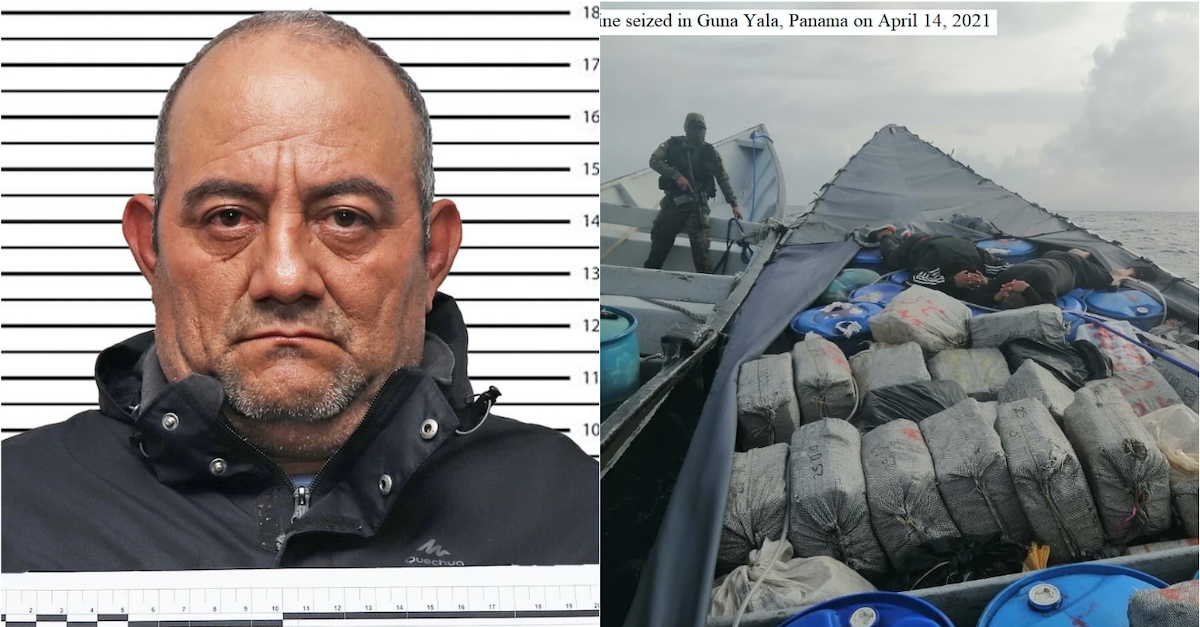 Accused Colombian drug lord Dairo Antonio Úsuga David, better known as Otoniel, was extradited to the United States on Thursday morning, appearing in court later in the day to face charges that he ran a multi-billion dollar cocaine trafficking cartel known as the “Clan del Golfo” (CDG). He pleaded not guilty to charges that could land the 50-year-old in prison for the rest of his life.

Colombia’s President Ivan Duque called the operation as “the biggest penetration of the jungle ever seen in the military history of our country,” according to the Justice Department.

“For the last decade, Úsuga David has been the principal leader of the Clan Del Golfo, or CDG, the most powerful paramilitary and drug trafficking cartel in Colombia,” Peace wrote in a statement. “He is responsible for trafficking vast amounts of cocaine—measured in tons, not pounds or kilograms; for earning enormous profits, measured in billions, not millions; and for overseeing an army of henchmen who murdered, kidnapped and tortured victims—including Colombian law enforcement and military personnel—to maintain control of the cartel and the regions where it operates.”

“His direct orders to his thousands of military-clad followers sent a ripple effect of drugs, death, and destruction to every community his cocaine shipments touched, from Colombia to right here in the Eastern District of New York,” Peace added.

Prosecutors say that the CDG kept its operations running through an “army” of “sicarios,” or hitmen.

“The CDG also employed ‘sicarios,’ or hitmen, who carried out various acts of violence, including murders, assaults, kidnappings and assassinations,” the indictment states, adding that the cartel would wreak violence to enhance its reputation, expand its power, enrich its leaders, maintain discipline among members and silence potential witnesses.

Also known as “Los Urabeños” or “Clan Úsuga,” the Clan de Golfo are based in the Urabá region of Antioquia, Colombia. Prosecutors say their “army” of members peaked around 6,000 people, a paramilitary force that they note eclipses the Boston and Miami police departments, combined.

“As a high-ranking leader within the CDG since its inception and its CEO for the past decade, Úsuga David directed his army to commit brutal acts of violence, terror, and retaliation; to exert control over vast territorial regions of Colombia and its people; and to export staggering quantities of cocaine destined for the United States,” Peace said during his prepared remarks. “This was incredibly lucrative and earned Úsuga David and his cartel billions in drug proceeds.”

Peace described the alleged brutality of the cartel at length.

“Úsuga David’s violence included public demonstrations of his power and repression of innocent civilians,” he said. “He imposed mandatory shutdowns or ‘strikes,’ a kind of Martial law where he ordered that all businesses in CDG-controlled territory remain closed and Colombian citizens within those regions had to remain at home. He ordered CDG soldiers to execute anyone who disobeyed the shutdowns’ rules.”

“At Úsuga David’s direction, the CDG also carried out organized campaigns (which they called ‘Plan Pistolas’) to kill Colombian law enforcement and military personnel using military-grade weapons, including grenades, explosives, and assault rifles, and to assassinate individuals who were believed to be cooperating with law enforcement,” he continued. “On numerous occasions, Úsuga David personally ordered the murder and torture of individuals deemed to be enemies of the CDG.”