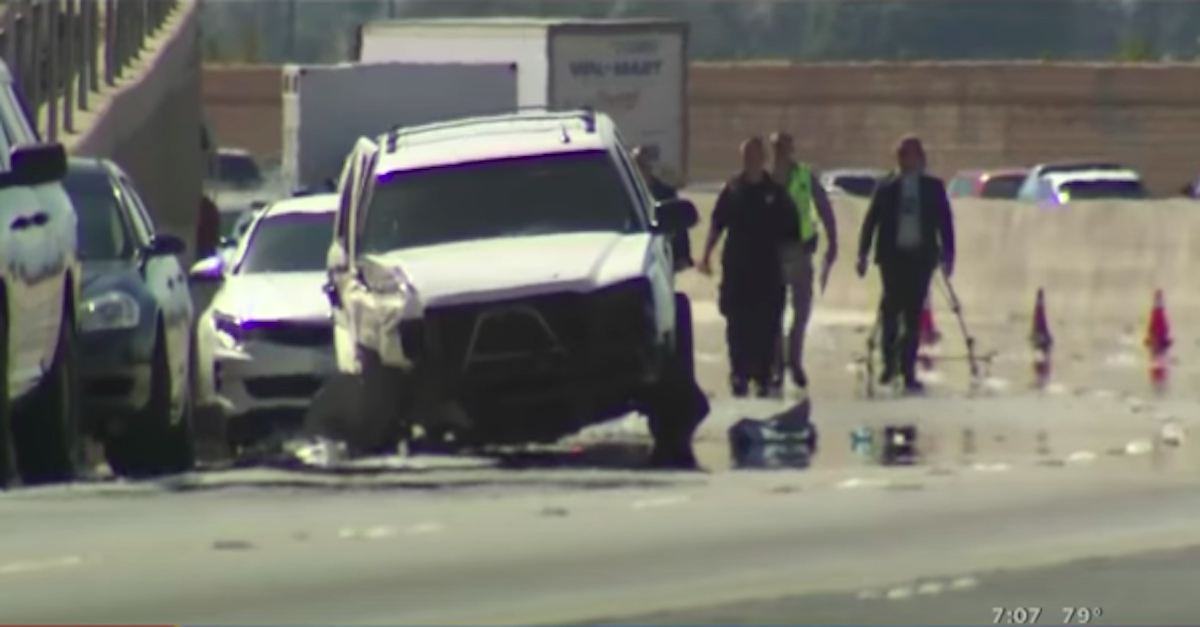 A car-to-car shooting on a California highway over the weekend caused a horrific multi-car crash that devastated a family, leaving a father dead and his two sons hospitalized while the shooter remains at large, several local news outlets reported.

Authorities say Luis Mendoza, 35, of La Puente, was driving his white Chevy Avalanche on the Pomona (60) Freeway in Hacienda Heights with his sons, ages 13 and 16, when a gray Toyota compact car in the carpool lane pulled up along the left side of Mendoza’s vehicle. Witnesses said the man in the passenger’s seat then stuck his arm out the window and used a handgun to fire multiple shots at the family’s vehicle. Mendoza suffered multiple gunshot wounds, losing control of the vehicle and colliding with a white Kia before smashing into the concrete divider wall.

According to a report from The Los Angeles Times, the California Highway Patrol (CHP) arrived on the scene at 12:28 p.m. Saturday after getting a call about a car accident. It was only after they found the three family members inside the Chevy Avalanche—which had “extensive collision damage”—and realized Mendoza had been shot several times.

Authorities worked to piece together what happened in another vehicle which contained an alleged attacker.

“At some point the right front passenger stuck his hand with a handgun out the window and fired several shots at the Avalanche and then sped away,” CHP officer Marcos Iniguez said, per a report from Los Angeles FOX-affiliate KTTV.

All three injured occupants of the victimized vehicle were rushed to Los Angeles County USC Medical Center. Mendoza was pronounced dead upon arrival at the hospital. The 16-year-old, who was sitting in the back seat of the Chevy Avalanche, suffered only minor injuries; the 13-year-old, who was sitting in the front passenger seat, was reportedly in serious condition after suffering major head injuries, the CHP said. The 13-year-old remained hospitalized as of Tuesday morning.

While authorities have not publicly confirmed a motive for the shooting, a family friend told local ABC affiliate KABC that he had his own suspicions.

“I heard it was road rage,” the friend, who gave his name only as Giovani, told the television station. “The two boys, they seen everything, witnessed everything, remember everything.”

A description of the shooter or the driver of the attacking vehicle has not been publicly released, and both individuals currently remain at large.

“If anybody has any clue to the suspect, the suspect’s license plate—we know it’s a gray sedan, Corolla or Camry,” Giovani said, adding, “But that information only goes so far.”

Investigators with the California Highway Patrol have encouraged anyone who may have call phone footage of the shooting or witnessed the incident to call them at (323) 644-9550.