California Woman Who Beat Newborn to Death, Discarded Body Across Street from Safe-Surrender Location Sentenced to Prison for Murder 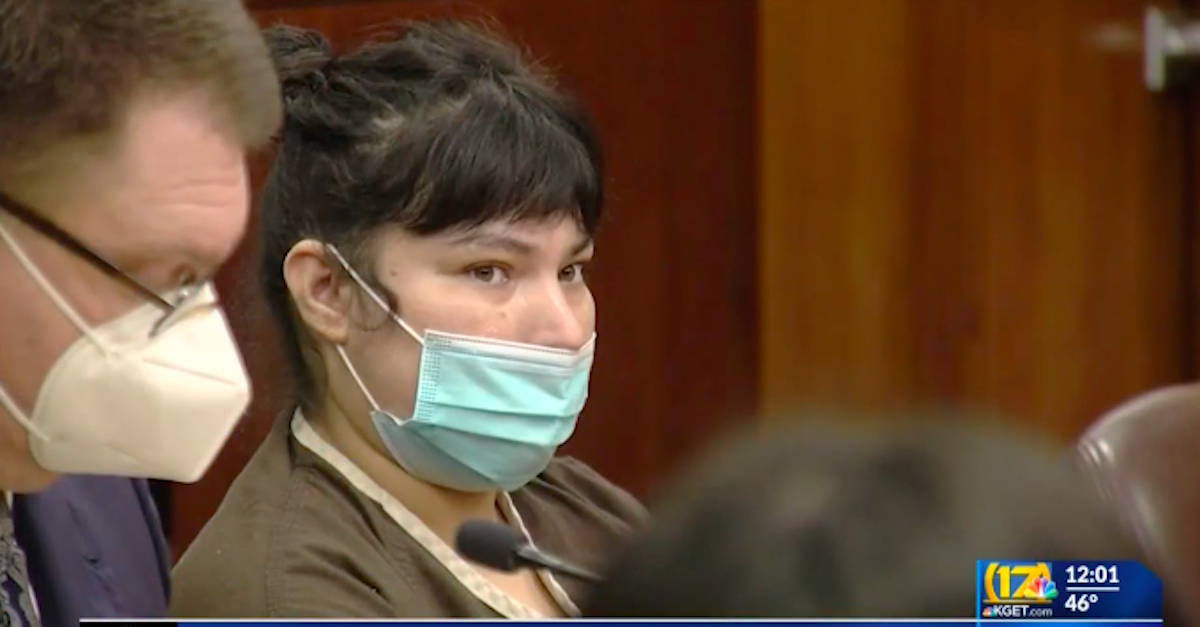 A California woman who beat her newborn son to death and then left his broken and bloodied body in the bushes across the street from a safe-surrender location may spend the rest of her life behind bars for the brutal slaying.

A Kern County jury in December found Farias guilty on one count of first-degree murder and one count of assault on a child under eight resulting in death. Farias originally entered a plea of not guilty by reason of insanity, but she formally withdrew that plea. The plea withdrawal meant that the jury did not have to sit for a second phase of the trial, during which they would have heard arguments and made a determination on the validity of the Farias’ mental health claim.

Farias’ attorney, public defender Kevin Moran, reportedly told journalists that he could not reveal why Farias chose to withdraw her insanity plea because such discussions are protected by attorney-client privilege.

As previously reported by Law&Crime, authorities in Shafter, California on the afternoon of June 9, 2015 responded to a 911 call about an injured woman in a downtown park. Upon arriving at the scene, first responders found Farias bleeding, and medical personnel determined she had recently given birth. Police, firefighters, and medical personnel began searching the surrounding area for the child.

A police officer discovered the baby’s remains several hours later. The newborn’s body had reportedly been wrapped in a towel and hidden in the bushes behind a building located on James Street. DNA testing reportedly showed that the child was the biological son of Farias and had been born within 48 hours of his death.

A forensic pathologist conducted an autopsy on the child’s body and determined the newborn’s death was a homicide caused by blunt force trauma to the head and midsection. The newborn had reportedly sustained a fractured skull, multiple broken ribs, and “injuries inside his mouth” less than two days after his birth, KGET previously reported.

Further adding to the tragic circumstances of the incident, the child was murdered and abandoned right across the street from the Kern County Fire Department’s Shafter Station, which is a designated Baby Safe-Surrender location.

California’s Safely Surrendered Baby Law, which was first enacted in 2001, allows a parent to “safely surrender” a newborn to an employee at any hospital emergency department, most fire stations or other designated “safe havens” in the state within three days of the child’s birth, provided the baby has not been abused or neglected. Between Jan. 1, 2001 and Dec. 31, 2017, an estimated 931 newborn children were safely surrendered compared to 175 newborns who were unlawfully abandoned, according to the California Department of Social Services.

“Safe Surrender laws exist to ensure that children born in the worst of circumstances are given the opportunity to survive. The murder of an infant in any circumstance is horrible, but for such a crime to occur despite immediately available options at no cost to preserve the life of a child is an atrocity that the law strongly, and rightly punishes,” District Attorney Cynthia Zimmer previously said in a statement. “The withdrawal of the insanity plea is a clear indication that whatever narcotics or mental conditions that may have contributed to this murder do not rise to the level of legal insanity and will not excuse the horrendous crime committed on an infant.”

Law enforcement authorities in the area reportedly knew that Farias was mentally ill and homeless. Per KGET, police spoke with her just weeks before she gave birth and noted that she was visibly pregnant. At the time of her baby’s death she was reportedly on probation for a drug-related conviction.