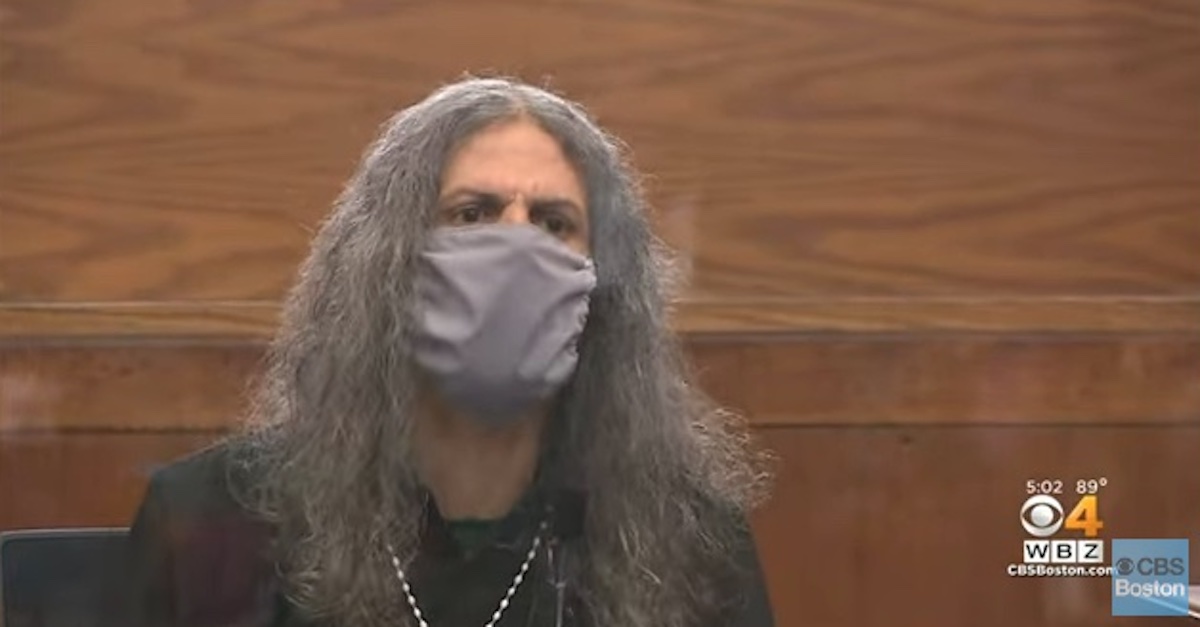 Victor Pena testifies at his trial on July 25, 2022. (Image via YouTube/WBZ screengrab.)

A Massachusetts man convicted of kidnapping and raping a woman repeatedly while keeping her inside his home for days will spend up to nearly 40 years behind bars.

Victor Pena, 42, was convicted on July 26 on 10 aggravated rape charges and one kidnapping charge stemming from a 2019 incident in which he held Olivia Ambrose, 23, for three days inside his home in Boston.

Local news website MassLive had reported that Pena had abducted Ambrose after she left a bar on Saturday, Jan. 19, 2019. According to the story, Ambrose appeared highly intoxicated at the time. Prosecutors said that after leaving the bar with a man, who then left with his friends, the victim was walking “alone in the snow.”

That, according to authorities, is when Pena pounced.

The victim reportedly remembered waking up on a bare mattress in a dirty apartment, MassLive reported. She tried to get her things and leave, but according to prosecutors, Peña threatened her and took her phone. He then spent the next three days raping and sexually assaulting the woman, prosecutors say. He also made her drink alcohol, demanded that she read the Bible out loud in Spanish and forced her to take photos with him.

According to WCVB, a digital forensic expert said that more than 300 photos and six explicit videos of the victim were found on Pena’s phone.

MassLive reported that an illegal deadbolt locked the apartment door in both directions.

Ambrose’s family filed a missing person report on Sunday evening. Using surveillance video, police were able to track Ambrose to Pena’s apartment: the two were seen on camera boarding public transportation and then heading toward the housing development where Pena lived.

“It’s obvious from the video surveillance that she did not go along willingly,” Boston Police Commissioner William Gross said at the time Ambrose was found. “She wasn’t in a physical state to possibly acknowledge going along with Mr. Pena.”

At his trial, Pena testified in his own defense. He told the jury that the three-day ordeal was consensual, and that the victim had asked him for help and had wanted to go to his apartment.

“And we started to have nice chemistry,” Pena reportedly testified. “I said I have an apartment, I had housing, and then, ‘Let’s go to your apartment,’ she said.”

Until he took the stand, Pena had stayed out of the courtroom during testimony, WCVB reported. He had apparently had multiple disruptive outbursts, including an incident during jury selection when he appeared naked on a monitor in the courtroom, appearing to be engaging in a lewd act. That jury pool was excused, WCVB reported.

The trial had been delayed multiple times, according to MassLive. Earlier this year, he had asked to be released from custody in order to obtain medical treatment. In September of 2021, MassLive reported, Pena fired his lawyer after the lawyer reportedly refused to argue that the victim was a prostitute. Pena also later fired his public defenders, the report said.

Pena had previously faced charges of indecent assault of two teenagers in New York City, according to MassLive. He was also reportedly subject to three restraining orders from Boston women in the last 15 years.