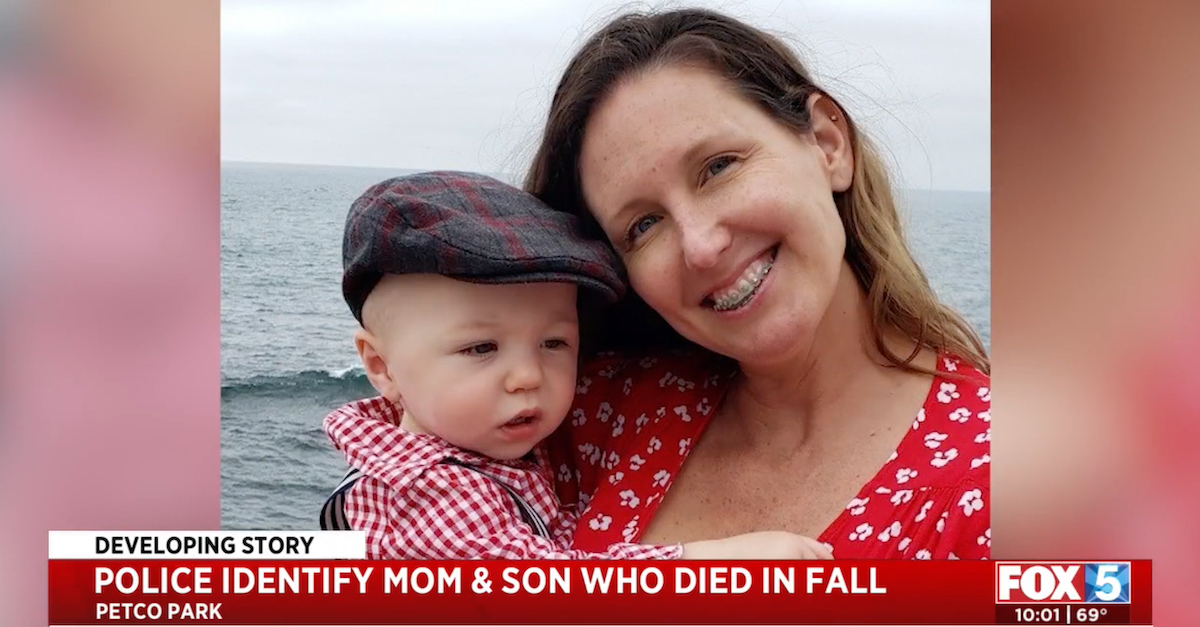 The deaths of a 40-year-old woman and her 2-year-old son before a Major League Baseball game have been ruled a murder-suicide by the San Diego Police Department, but an attorney who represents the dead woman’s family says the police are covering for the city-owned ballpark where the mother and son fell to their deaths last year.

Raquel Wilkins and her son Denzel Browning-Wilkins tumbled from the third level of Petco Park in San Diego — a height the Los Angeles Times calculated as the equivalent of a six-story building — at about 3:50 p.m. on Sept. 25, 2021. The mother and son landed on a sidewalk, and immediate efforts to rush to their aid were quickly determined futile. Both were pronounced dead by 4:11 p.m., the newspaper reported.

After speaking with an eyewitness, San Diego FOX affiliate KSWB reported last year that “Wilkins appeared to lose her balance after twice jumping up on a bench near the railing on the third level of the stadium.”

“I remember saying, ‘I can’t believe she’s doing that again,'” the witness said. “And then she was gone.”

The San Diego Union-Tribune reported a similar written observation provided to the newspaper by the daughter of a purported witness. The newspaper was careful to note that it did not interview the witness directly.  The statement indicated that the witness was eating on a picnic table near Wilkins and her son. Wilkins held her son and jumped on the bench of a picnic table near the ball park’s exterior railing.

“She seemed happy — laughing,” the witness said in the statement provided to the newspaper via the daughter.

The Union-Tribune’s summary of the document further unpacked what allegedly happened:

Wilkins lost her balance and fell off the bench, landing back on the concourse, according to the witness, who said she remarked to her son that the woman and baby had almost tumbled over the railing.

About 30 seconds to a minute later, Wilkins again jumped onto the bench of the picnic table while holding the child , according to the witness, who said she commented to her son that she couldn’t believe the woman had stood back up on the bench after falling the first time.

“She again lost her balance and this time, fell over the edge,” the witness said. “From my vantage point, looking at her back, it was almost like she rolled over the railing.”

The witness said the man with them — believed to be the child’s father — was looking over the edge of the railing and appeared to be in shock.

The woman then exclaimed “Oh my gosh, she went over!” to her son, according to a re-telling of what appears to be the same statement by San Diego NBC affiliate KNSD.  Images obtained from a ball park employee by the NBC affiliate showed a short railing behind the picnic tables where the woman allegedly fell.

The Padres were set to play the Atlanta Braves that day, and fans were heading inside the ballpark when the mother and son died.

According to a widely distributed press release, the police department said Wednesday that “detectives conducted a thorough and comprehensive investigation that included dozens of interviews, reviewing of available video footage, and collecting background information to determine what led to the deaths.”

The department concluded that the worldly criminal justice system could not mete out a resolution to the matter. 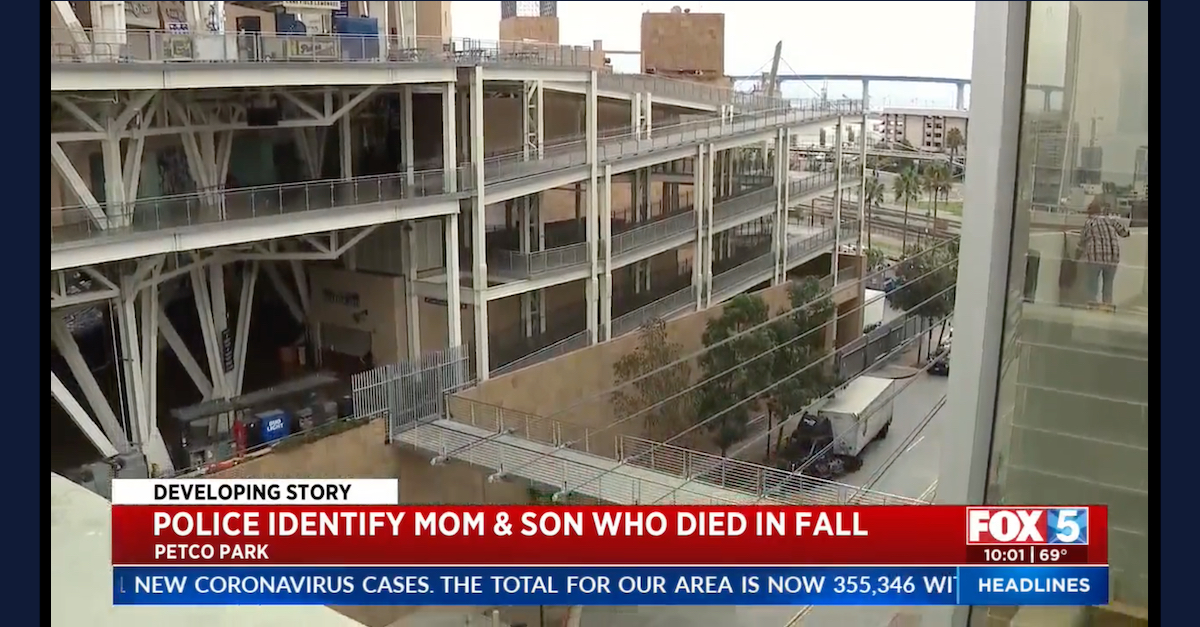 A KWSB-TV screengrab shows the area of Petco Park in San Diego, Calif., where Raquel Wilkins and her son fell to their deaths.

The L.A. Times said that the City of San Diego owns 70% of Petco Park — a fact an attorney who represents Wilkins’ father considers suspicious.

“To me, the City is acting like any other defendant in a lawsuit: blame the victim, especially if they’re not able to defend themselves,” attorney Dan Gilleon told KWSB and the Associated Press.

Gilleon sugested that the police department’s finding is merely a cover for the city itself.

“Like any other property owner, they were required to keep people on their property safe,” Gilleon continued. “Within hours of Raquel’s and Denzel’s deaths, the City’s mayor went to the press and blamed it all on Raquel. Four months later, the City’s police went to the media and said the Mayor was right. But the City doesn’t want to explain why it concluded that a young mother would kill her only child at an event where witnesses said she was happy.”

What appears to be Wilkins’ Facebook page contains several posts which suggest she was engaged to be married on Sept. 21, 2021 — just days before her death. (There are three such posts; two are dated Sept. 21; one is dated Sept. 25.)

“The city of San Diego owns that ballpark, it is legally responsible, assuming that what caused her to fall was anything but her intent,” Gilleon continued in remarks to KSWB on Wednesday. “The only way the city is not at fault is if she intended to kill herself and her baby.”

Gilleon noted that Wilkins obtained a psychology degree and worked as an education administrator.  He said the family would be “commencing a lawsuit for wrongful death” at some point in the future.

The Padres addressed the police department’s findings in vague terms of condolence.

“In light of today’s statement from the San Diego Police Department we want to reiterate our deepest sympathy and condolences to the family of those involved in this tragedy,” the Padres said in a statement.

Shortly after the deaths last year, San Diego CBS affiliate KFMB dug up a 2016 restraining order involving Wilkins. A former boyfriend claimed in that document that the now-dead mother had a “documented history of suicidal and psychotic behavior and a history of compulsive lying.”

At the time, Gilleon said the Wilkins family believed the ex-boyfriend’s claims were lies.

“I’m not surprised that somebody who’s angry at somebody else is going to try and make that person look crazy,” the attorney told KFMB in September 2021. “He was probably pretty angry at Raquel for having the audacity to try to get protection against him.”

According to the court file, Wilkins was the one who prevailed.

“[A] restraining order was issued against the ex-boyfriend and expired in 2017,” KFMB reported. “He had to move out of the Ocean Beach home he shared with Wilkins.”

Wilkins’ family also released a statement which said there was nothing wrong with Wilkins.

“The family remembers Raquel as a person who was happy and loved life,” that statement read. “In our experiences through her life, Raquel never expressed or displayed any self harming tendencies.”