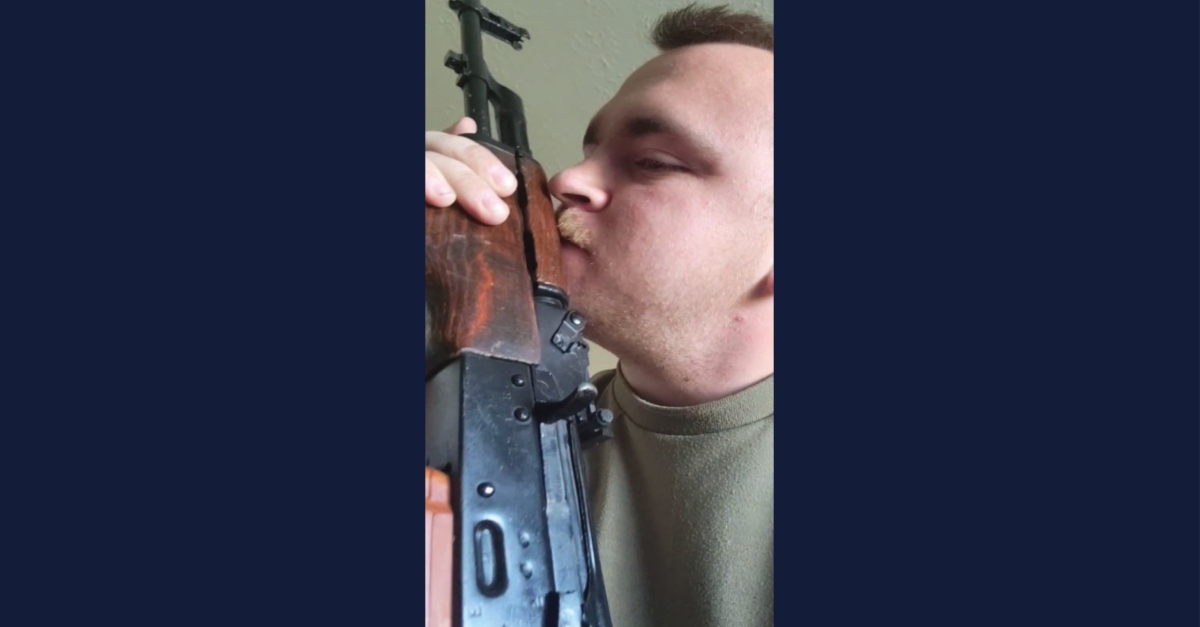 A former security guard who was previously charged in an Ohio court for allegations including threatening a Jewish school has now been accused in federal court of making and selling “ghost guns.” Thomas Develin, 24, faces a number of firearms charges, the U.S. Department of Justice announced on Wednesday.

Federal prosecutors made note of Develin’s alleged social media activity. He allegedly infused his missives with a fixation on firearms, ideations about committing terrorist attacks, and visceral bigotry in the form of anti-Semitism, misogyny, and anti-Black sentiment.

“This one smells like dead Jews,” he allegedly said as he sniffed a rifle in a Snapchat video on Nov. 21, 2021.

That same day, he allegedly made a Snapchat video titled “Jewish Women.” In it, he allegedly held a gun “aimed in the direction of unknown individuals.” Federal authorities said they could not identify the alleged targets, but they noted that records from Develin’s employer, Sahara Global Security, indicated that he was working at Temple Israel at the time of the video.

Prosecutors said Develin “made antisemitic and violent statements while employed to provide security services at local synagogues and Jewish schools.”

The complaint charges Develin with engaging in business without a firearms license; illegal possession of a machine gun; failure to register as a dealer, manufacturer, or importer, or to pay required tax; receipt or possession of firearm made in violation of NFA (the National Firearms Act); and making a firearm in violation of the NFA.

“Uh oh I accidentally made an NFA item,” he allegedly wrote on an image which showed him holding a handgun that has a second grip.

The NFA imposes additional regulations on such firearms, beyond those applicable to other firearms. The attached photo appears to represent an “any other weapon” (AOW) due to the attachment of a foregrip to a handgun. This would “remanufacture” the weapon from a one-handed firearm to a two-handed firearm with an overall length under 26 inches. This makes the item an AOW under the NFA and as such subject to NFA regulations. Your affiant believes this photo is an example of DEVELIN’s knowledge, capabilities, and expertise in creating illegal NFA weapons.

Develin allegedly admitted to investigators that he started making ghost guns in 2020 to make money. He allegedly went to a home on March 28, 2022 in Chesterhill, Ohio, to drop off guns because he knew law enforcement may be coming for him. He returned the next day to burn illegal items, officials said.

“Your affiant notes that DEVELIN was enlisted with the Ohio National Guard at the time of these events and also employed for the security company Sahara Global Security,” the criminal complaint says. “Sahara Global is a private security company which often provides armed security to various Jewish facilities throughout the Columbus area.”

The Sahara Global family is sickened by the behavior of our former employee who was terminated on 25 March, immediately following the discovery of recent questionable activity on social media. Sahara Global Security maintains a strong relationship with local law enforcement authorities and coordinated closely with federal investigators in order to arrest the individual. Sahara Global Security has systems in place to constantly vet our employees. As soon as the former employee was flagged, his employment was terminated. Sahara Global takes the safety and protection of the Columbus Jewish community very seriously and will continue to take every precaution in our hiring processes.

Furthermore, Sahara Global was surprised and appalled when hearing about the allegations because the employee had a SECRET security clearance through the US military, and had passed all background checks, to include fingerprinting, drug testing, personality exams, and an extensive interview. The fact is the former employee was living a duplicitous life. Sahara Global does not tolerate bigotry, hatred, antisemitism, or racism of any sort. We love the Jewish Community and consider them our family. We understand the frustration and pain they are experiencing during this time.

As previously reported, Develin was a member of the Ohio National Guard.

He displayed a firearm while at a Jewish school during a March 2022 Snapchat video, authorities said.

“The holocaust didn’t happen” and “If anything I’ll scream 6 million wasn’t enough,” he allegedly wrote in other posts dated Jan. 28, 2022. The posts contained a picture which authorities described as depicting the inside of the Temple Beth Shalom in New Albany, Ohio.

On Sept. 27, 2021, the defendant allegedly posted a picture in which he mentioned working at a synagogue.

“I’m getting $30 an hour for executive protection,” he allegedly wrote on Sept. 27, 2021. “But it’s at a Jewish synagogue. Having an inner debate that if an active shooter comes in I might just join him.”

Develin is also said to have actively discussed shooting people. From the complaint:

On March 11, 2022, DEVELIN posted, “I’m at a Jewish school and I’m about to make it everyone’s problem.” Shortly after stating, “The playground is about to turn into a self-defense situation.” In the context of the group chat, a “self-defense situation” is clearly referenced multiple times and is meant to be a reference to being involved in a shooting. He also posted, “Simultaneously I will shoot the next parent dropping their kid off at the school. Really need to get on their radar at the ATF that we aren’t fucking around.” Accompanied with these posts was a photo depicting a Glock handgun on his lap.

Develin allegedly discussed mass shootings, including those in Fort Hood, and also wrote on a modified AR-15 magazine an apparent reference to an attack on a mosque in Christchurch, New Zealand, prosecutors asserted.

“We’re about to hunt n[*****]s on night patrol in Columbus,” Develin allegedly wrote in a chat group on Discord last Feb. 5. “Someone’s gotta work the beat and hold the line.”

He also allegedly made multiple posts supportive of raping women. For example, he allegedly posted an image in which rape is compared as favorable to sex.

“I’ve become so radicalized against women that I’ve forgotten how to act rationally around them when one of them decides it’s a good idea to speak to me,” Develin allegedly posted in yet another missive dated Feb. 8, 2022.

The defendant is separately “charged in [Ohio’s] Franklin County Court of Common Pleas with 2 counts of Making Terroristic Threats, 2 counts of Possession of a Dangerous Ordnance, and 1 count of Tampering With Evidence,” according to the federal charging documents.