Following Court Hearing, Uncle Allegedly Murdered 23-Year-Old Nephew Who Had a Romantic Relationship with His Ex-Wife 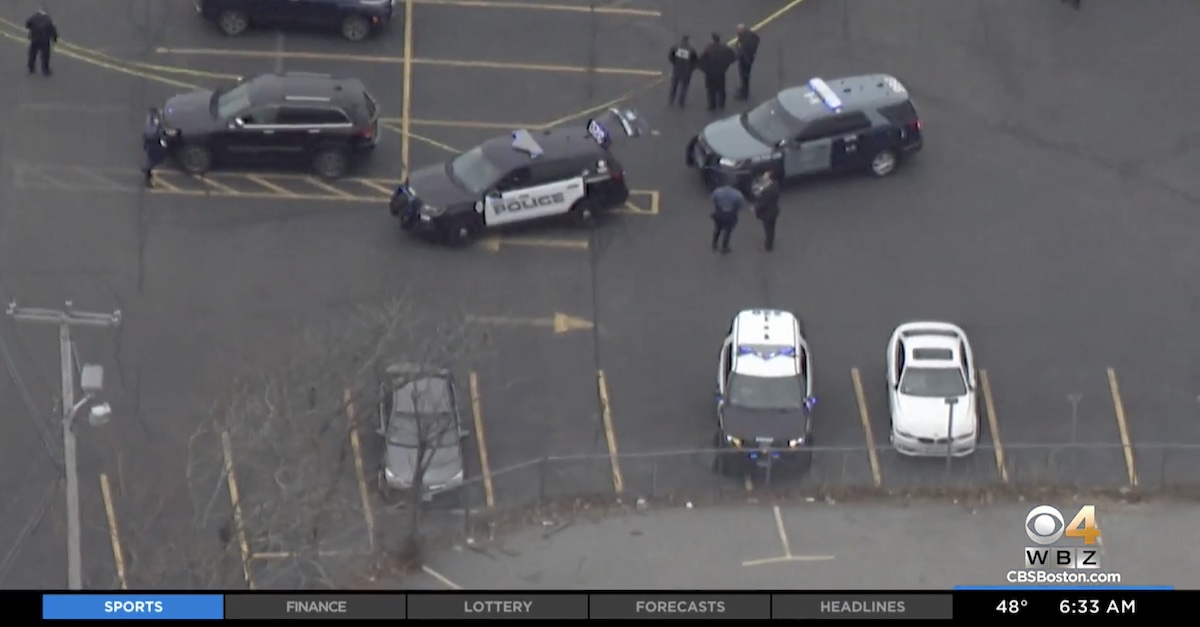 Pictured: an aerial view of officers at the scene outside the courthouse after Chenghai Xue allegedly shot and killed his nephew.

Prosecutors in Massachusetts announced Thursday that a 44-year-old man was taken into custody for allegedly hitting his nephew with a car and shooting him to death in a parking lot after a court hearing in which the suspect sought to extend a restraining order against the victim.

Xue was arraigned Friday in Somerville District Court on the murder charge. He reportedly pleaded not guilty and was ordered held without bond.

According to WBZ, it is believed that the victim started a consensual romantic relationship with Xue’s then-wife while the suspect was out of the country for work in China back in 2018. Things allegedly spiraled out of control after the woman tried to end the relationship:

According to court documents released Friday, Xue’s wife and nephew started a romantic relationship in 2018 while he was traveling for work in China. When she tried to end it, the nephew wouldn’t accept the breakup. Xue said his nephew began threatening to harm his family, his now ex-wife and himself.

District Attorney Marian Ryan’s (D) office said that a “preliminary investigation suggests that Mr. Xue and the victim had been at the courthouse for a hearing, where Mr. Xue was seeking an extension of a restraining order against his nephew.”

After a judge rejected Xue’s request to extend the restraining order, the shooting occurred.

“Following the hearing, both parties exited the courthouse headed to the parking lot where they were both parked. The suspect then allegedly got into his vehicle and drove at the victim hitting him as well as other vehicles in the parking lot,” the press release said. “After striking the victim, the suspect allegedly exited the vehicle in possession of a handgun and shot the victim multiple times.”

Wang died at the scene.

Authorities said the 911 call about the shooting came around 4:50 p.m. on Thursday. The suspect’s lawyer William Barabino was actually the person who held Xue down as responding Massachusetts State Police and Medford Police and made an arrest. The lawyer reportedly told WBZ he was stunned by what transpired.

“I just very gently placed a knee on him and sort of rubbed his back,” he reportedly said. “He was the type of guy you want working next to you. You know what I mean? So as a result, you’re sitting there going saying, ‘Wow, wow, I didn’t expect that.’”

DA Ryan reportedly added that it was “extremely concerning” that the shooting occurred at a time when people were leaving the courthouse near the end of the day.

Barabino said Wang came to the U.S. from China years ago to live with his client.

Xue’s ex-wife was spotted waving at him at the end of the Friday hearing, WBZ said.