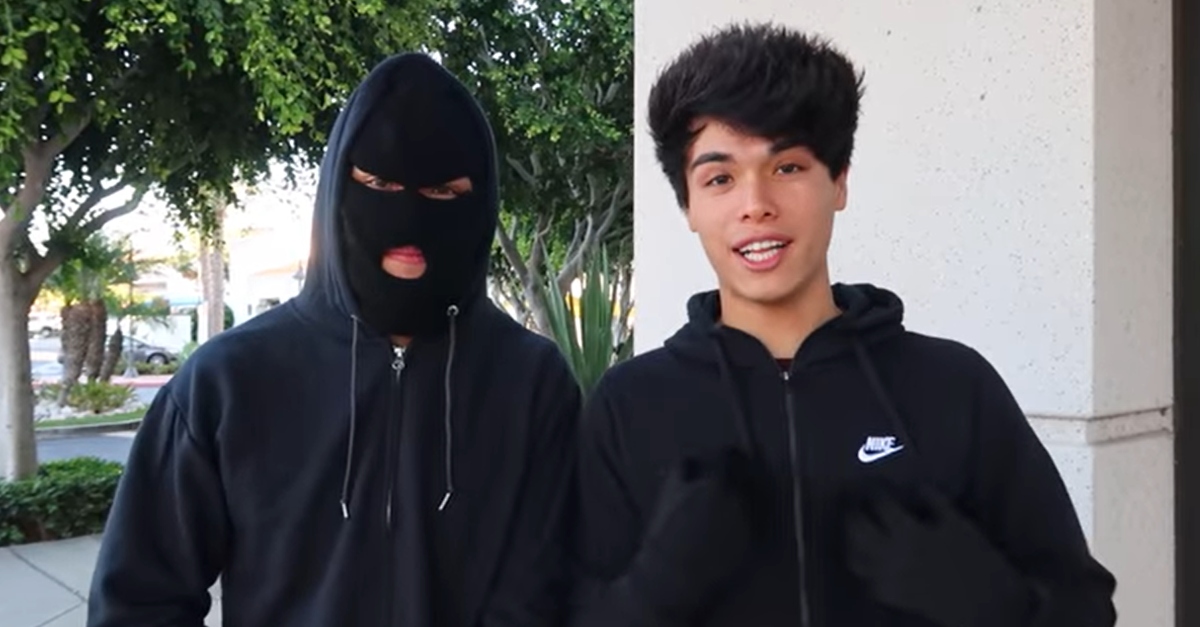 Two YouTubers were charged Wednesday for a “prank” in which they pretended to be bank robbers. Alan and Alex Stokes, 23—a.k.a. the “Stokes twins”–recorded their video last October, said prosecutors in Orange County, California.

Alan and Alex Stokes, known as the Stokes Twins on YouTube, have been charged with swatting and false imprisonment for a pair of fake bank robberies in #Irvine. In one of these “pranks” an Uber driver was held at gunpoint by police. pic.twitter.com/tuvEBVphlW

The duo–dressed in black, wearing ski masks and holding duffel bags full of cash—called an Uber, prosecutors said. The driver wasn’t aware of the prank, and he refused them service. But someone saw this, believing it was a carjacking, prosecutors said. Police arrived at the scene, and ordered the driver out of the vehicle at gunpoint, according to the account.

“Let’s try to get this video 100,000 likes because we’re literally risking our lives doing this video,” Alan Stokes said in the intro of the video viewed by Law&Crime.

Video showed them running around, asking bystanders about the locations of banks. It also showed them trying to pick up women but getting turned down. They said they were filming for three days.

But the key moment happened when the twins stepped into an Uber driver’s vehicle. In the video, the man questioned them. One of the twins said their getaway driver “bailed on us.” The driver continued to be wary of them.

“Just get out of my car please,” the man said. The twins complied, but as seen on video, police arrived, and chastised the twins for their skit.

“Think about what’s going on nowadays,” said an officer. “Think about it. You’ve got be smarter than that. You know better.”

Police issued a warning at the time, and let them go, prosecutors said. The video did not show officers pointing guns at the Uber driver, but one of the twins described this happening.

“One minute later [after the driver kicked them out], there were like 10 cops cars that pulled out guns on him,” he said. “There were rifles. They thought he was the getaway driver. They had like 15 guns.”

The driver told police he wasn’t a part of this, according to the account.

One of the YouTubers also said on video that they had the police called on them “all day.” According to the prosecutors’ account, police recieved emergency calls regarding a bank robbery on the campus of the University of California. As seen on video, one of the twins (without a ski mask) sat across a table from an older man, and began taking large amounts of apparent cash in and out of the bag. The twin left, but the older man is described in the video as then calling police.

The Stokes are both charged with one count of false imprisonment effected by violence, menace, fraud, or deceit, and one misdemeanor count of falsely report an emergency. Law&Crime sent a request for comment to their business email.

“These were not pranks,” Orange County District Attorney Todd Spitzer said. “These are crimes that could have resulted in someone getting seriously injured or killed. Law enforcement officers are sworn to protect the public and when someone calls 911 to report an active bank robbery they are going to respond to protect lives. Instead, what they found was some kind of twisted attempt to gain more popularity on the internet by unnecessarily putting memebrs of the public and police officers in danger.”

[Screengrab via The Stokes Twins]