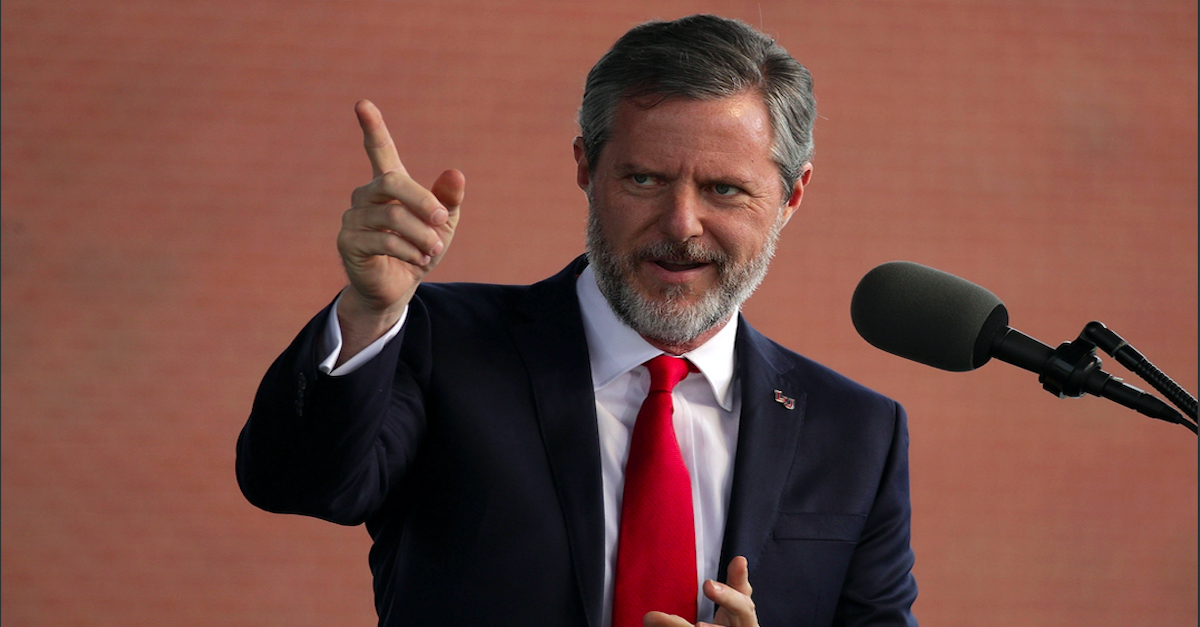 West Virginia Governor Jim Justice and Liberty University President Jerry Falwell Jr. joined together in the common cause of secession on Tuesday at a press conference bemoaning a spate of legislation passed in the aftermath of massive Democratic Party gains in the Old Dominion. Liberty University is a private evangelical institute located in Lynchburg, Virginia.

Their plan is called “Vexit” and is not really being taken seriously by anyone. Virginia has no constitutional, state-based mechanism for counties to breakaway, splinter or secede unlike, say, Texas—which has divisionism written into its state charter. (The validity of those Texas provisions, however, is of some doubt.)

State legislators in West Virginia recently spent public funds arguing over and passing legislation aimed at liberals and Democrats in their neighboring state.

One such resolution reads, in arguably relevant part:

Whereas, In the latest, and most evident, in this string of grievances, the government at Richmond now seeks to place intolerable restraints upon the rights guaranteed under the Second Amendment of the United States Constitution to the citizens of that Commonwealth; and

Whereas, The Legislative body of West Virginia believes that this latest action defies the wise counsel which has come down to us in the august words of our common Virginia Founders: as the government at Richmond now repudiates the counsel of that tribune of liberty, Patrick Henry-who stated to the Virginia Ratifying Convention in 1788 that “The great object is that every man be armed. Everyone who is able might have a gun”

One West Virginia politician even took the time to single out Virginia’s Frederick County by name.

“In addition to the historical connections between Frederick County and the seven counties of our Eastern Panhandle, there are strong bonds and ties of every kind among the citizens—family, business, education, culture, and commerce. We share common values,” West Virginia State Senator Charles S. Trump, IV said during one such discussion. “Frederick County’s residents have so much in common with West Virginia that our separation has never made sense. The citizens of Frederick County are champions of freedom and personal liberty, and they would be welcomed with open arms by the citizens of the Mountain State.”

Frederick County leaders were reportedly nonplussed, according to the Virginian-Pilot.

Falwell, son of the late racist, homophobe and high-profile conservative activist, took the opportunity to long for the past while criticizing restrictions recently placed on gun-owners in the state.

“I hope history will also record, one day, how Virginia divided once again in our decade — because the interests of those in Richmond were so divergent from those of us to the west, just as they were for Kentucky and West Virginia,” the evangelical son of privilege said.

“What’s happening in Virginia right now is a tragedy in the making,” Falwell added. “Democratic leaders in Richmond, through their elitism and radicalism, have left a nearly unrecognizable state in their wake.”

The joint press conference was met with disdain from Virginians of both political parties. One Republican state senator dismissed the announcement as “a comedy routine.”

A spokesperson for Virginia’s occasionally-blackface-wearing Democratic Governor Ralph Northam took aim at the source: “As always, Jerry Falwell’s words speak for themselves,” she said.

The call for secession is actually something not entirely unlike an inverse of the time Virginians actually seceded from the Union.

During the Civil War, Virginia initially plotted a cautious and unionist course—but eventually joined the slavery-defending forces and cause of the Confederacy. West Virginia was formed after 50 counties splintered away from the state—choosing union and progress.