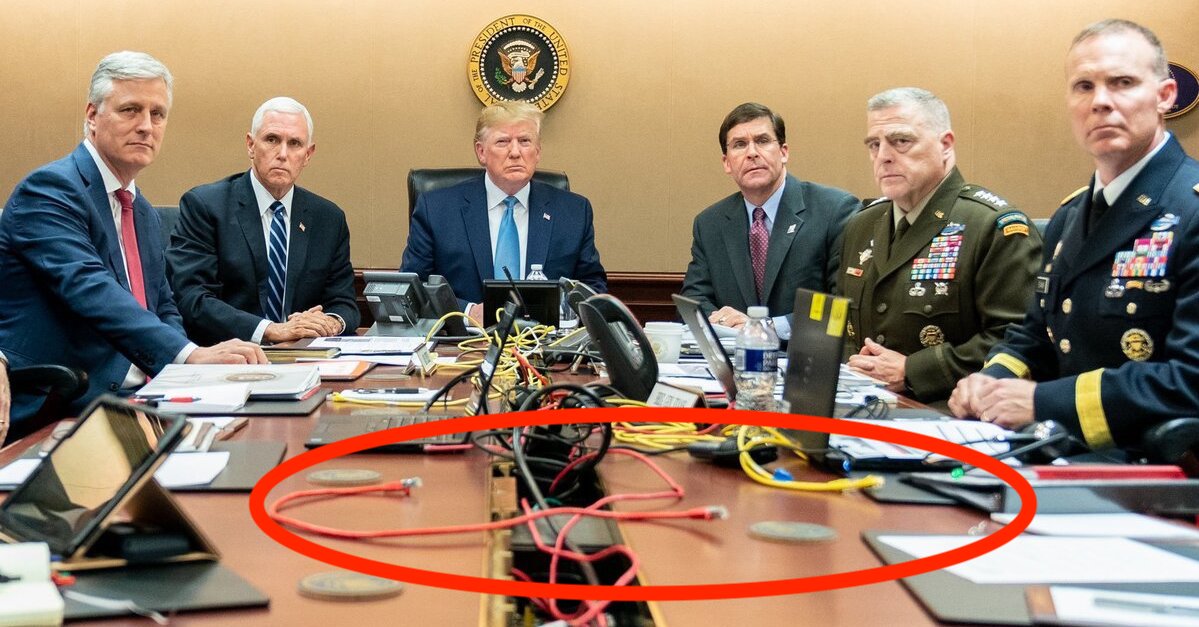 “The U.S. personnel were incredible,” Trump said during a Sunday morning press conference. “I got to watch a bunch of it.”

White House Director of Social Media and Assistant to the President Dan Scavino Jr. later publicized an image purporting to show Trump personally keyed in on the raid deep within rebel territory held by takfiri jihadist forces loyal to both the Islamic State and al-Qaeda.

Former chief official White House photographer Pete Souza said on Twitter that the Idlib raid “took place at 3:30 p.m. Washington time” while the alleged Situation Room photo posted by Scavino “as shown in the camera IPTC data” was taken over an hour-and-a-half later.

Souza’s post immediately prompted accusations across social media that the White House had staged the image for publicity purposes.

According to Trump’s scheduled itinerary for Saturday, he arrived at Trump National Golf Club in Sterling, Virginia on Sunday morning. The presidential motorcade departed at 3:33 p.m. and Trump arrived at the White House’s North Portico entrance at 4:18 p.m.

Trump was reportedly airlifted from Camp David at 10:34 a.m. and then arrived at his golf club at 10:55 a.m; the press pool reportedly left with the president “for trip back to White House” at 3:33 p.m.

“After uneventful motorcade through a good bit of traffic and road construction, we arrived back at White House at 4:18 p.m. Motorcade pulled into North Portico entrance (not usual South Lawn entrance, where WH is setting up for Halloween),” the report notes. “Trump was spotted walking in wearing navy blue pullover and red cap.”

Twitter critics were quick to compare the timelines and complain that the Situation Room photo was staged.

One of these photos is staged. @PeteSouza’s photo was taken from the corner of the room since he was trying to stay out of the way.

Everyone in the @realDonaldTrump photo is looking straight at the camera, the photographer would‘ve blocked the screen Obama et al were looking at pic.twitter.com/nFQfmQl4Pz

Three of the men in this staged photo, including Trump, are pretending to look at a monitor. Two of the men are looking at the camera. And Mike Pence is looking at the guy next to him. Tell me I’m wrong. pic.twitter.com/KFqp7mURy0

Former Chief Official White House Photographer is suggesting that the White House may have staged this photo in the Situation Room. pic.twitter.com/9XXmVsG3m6

There were also comparisons to former president Barack Obama‘s situation room during the raid that killed Osama bin-Laden.

One is staged to make man with no military experience look like he’s calling the shots. The other is a real picture of how the events unfolded. Only one has genuine historic significance. pic.twitter.com/XDkOP36Meu

Donald is wearing his “I wanna be Obama” face for this staged photo. https://t.co/rkCm1SW3Nc

Many users also pointed out that several cords are unplugged in the controversial image–suggesting the equipment used to view the raid in real-time was not actually on when the photograph was taken.

Cords are not even plugged in anymore. So the staged photo they released is BS. He wasn’t even there when the raid actually happened. He was coming back from golf. Apparently there’s a timestamp somewhere on the picture. pic.twitter.com/sYCPvePZf0

“Just to be clear, I didn’t say it was staged,” Souza later tweeted after his initial post quickly went viral. “Trump himself said he didn’t arrive to the Situation Room until ‘around 5pm’. So it’s definitely possible the photo was taken during the raid.”

Law&Crime reached out to the White House for comment on this story but no response was forthcoming at the time of publication.

Editor’s note: this article has been amended post-publication for clarity. Initial reports indicated that President Trump was at his golf resort when the raid began. Some of those reports, however, have since been retracted–calling into question the timeline. Law&Crime will update this story when the timeline is confirmed.