Tissue Bank That Lied to Donors, Sewed Bodies Together ‘Like Frankenstein,’ and Had Cooler Full of Penises Loses Lawsuit 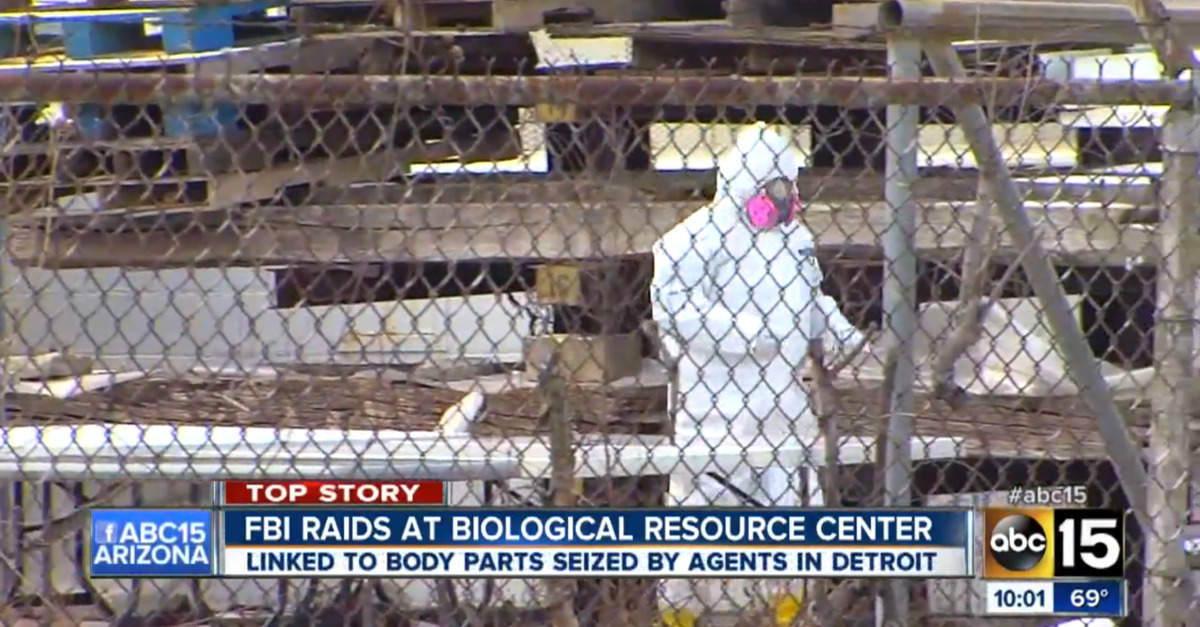 One of the most disgusting lawsuits in recent memory has run its course and a $58 million verdict was issued in favor of the plaintiffs.

The controversy centers around a body donation program run by the Biological Resource Center, Inc.–a now-shuttered tissue bank whose gruesome medical-like practices have been described in language evocative of scenes from a Lloyd Kaufman, Tom Six or Eli Roth film.

Law&Crime previously reported on a raid conducted by the Federal Bureau of Investigation (FBI) during which an agent said they came across a cooler full of “male genitalia,” “a bucket of heads, arms, and legs,” “inflected [reshaped] heads,” and a small woman’s head sewn onto a much larger man’s torso “like Frankenstein.”

“[P]ools of human blood and bodily fluids were found on the floor of the freezer,” the FBI agent added, noting that none of the bodies contained medically necessary identification tags.

Families of the recently-deceased unwittingly donated their loved ones to the Arizona-based firm under the pretense that their corpses would further genuine medical research–like the quest for a cancer cure. But that’s not what happened at all. Instead, the cadavers were methodically dismembered in what have been termed “human butcher shop” facilities located in the Grand Canyon State and Illinois.

“The evidence at trial proved that Gore was running a body broker ‘chop shop,’ where he’d deceive families into donating their loved ones upon death for medical and scientific research, but instead chopped the bodies up and sold the parts to other body brokers for profit,” said attorney Michael Burg, founder of Burg Simpson, and lead counsel for the plaintiffs.

Whole bodies and select body parts were then sold for profit and shipped to third parties. One such buyer was the U.S. Department of Defense–who used the ill-gotten dead loved ones in explosive tests.

In 2015, the Biological Resource Center’s now-former owner, Stephen Gore, testified with some amount of remorse as he pleaded guilty to illegal control of a criminal enterprise before receiving four years probation and a deferred prison sentence.

“I’m not here to offer any excuses,” Gore said during his sentencing hearing. “There were mistakes made. However, they were never for a financial gain. The mistakes that were made were done, in my opinion, in the best interest for what we thought the donors and their families.”

A civil lawsuit was filed in July of this year and the trial recently concluded. On Tuesday, a jury handed down their verdict against the Phoenix facility. Between ten and 21 plaintiffs–who were represented by attorney Michael Burg–will be entitled to the damages.

David TeSelle also represented the plaintiffs during the recent trial. In a statement to Law&Crime, he described the lax regulatory regime surrounding the controversy and upshot of Tuesday’s court victory:

What people don’t realize is that the illicit body broker trade is something going on right now across the nation. Unlike organ transplant donation, which is heavily regulated, there is very little regulation or oversight – and in most states none at all – into body donation at death, to ensure that the donors and their families’ wishes are being met. Whole body donation, when done right and by businesses who follow the rules, is a valuable and wonderful thing. But when done wrong, when it’s the product of deceit and greed, we as a society need to stand up and fight back. We are extremely grateful that this jury took a stand and said no more.