Sculpture of Breonna Taylor Was Vandalized, Police Now Are Investigating 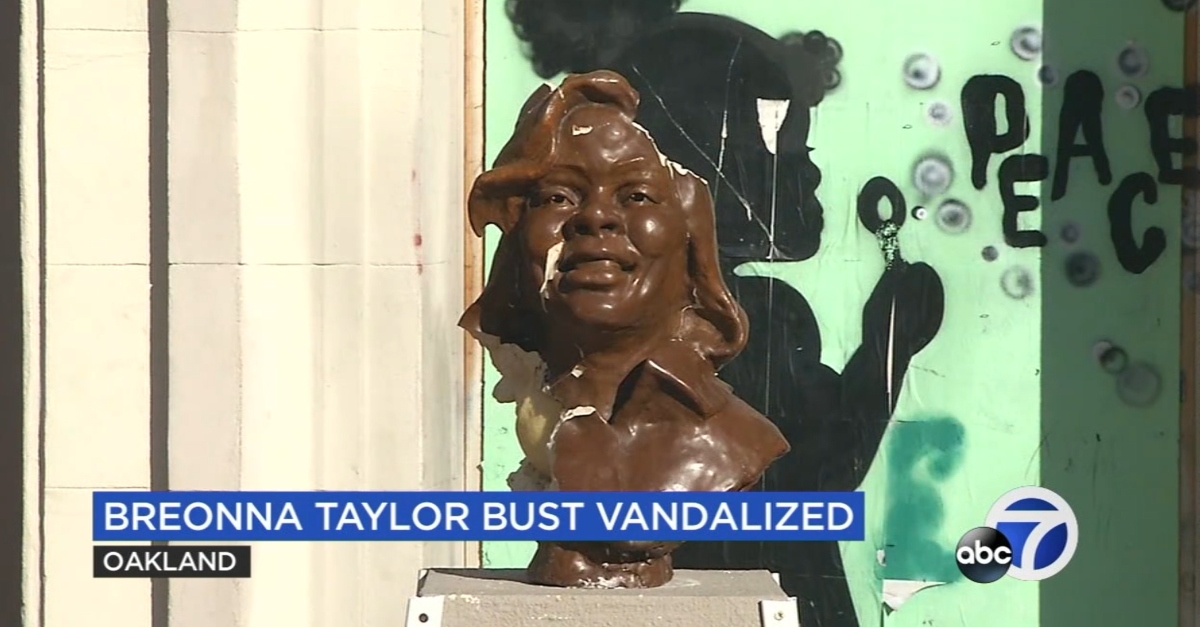 Someone broke a sculpture of slain Kentucky woman Breonna Taylor. Police in Oakland, California say they know about “the vandalism of a bust honoring Breonna Taylor,” according to KQED. A report was filed. They are investigating. The sculptor told the outlet this was “an act of racist aggression.”

Taylor died in a botched police raid on her apartment in Louisville, Kentucky during the early hours of March 13. Cops had been there to execute a no-knock warrant in connection to a drug case against her ex-boyfriend Jamarcus Glover. Police said that Glover (who did not live on the premises) used her apartment to obtain packages. Authorities used this allegation to obtain the no-knock warrant, though they’ve claimed they knocked on Taylor’s door and said who they were. Taylor’s boyfriend Kenneth Walker opened fire after law enforcement forced their way in, later saying he did not know these were police officers.

In the end, Taylor was shot and killed by cops. Walker was charged in a now-dropped attempted murder case for allegedly shooting Sgt. Jon Mattingly. Police found no evidence saying that Taylor or Walker were involved with drugs (an officer said they did not actually manage to execute the warrant). Three officers–Mattingly, Detective Myles Cosgrove, and Detective Brett Hankison–opened fire in the Taylor shooting, but none were charged in her death. Only Hankison lost his job, charged with three counts of wanton endangerment because he allegedly fired into a neighboring apartment occupied by three people–a man, a pregnant woman, and a child. He has pleaded not guilty.

But at least three Jefferson County grand jurors who reviewed the deadly raid have stepped forward to say that they were not allowed to consider other charges.

The death of Taylor, who was Black, landed squarely on a cultural fissure: the ongoing national debate on how law enforcement interacts with people of color. Leo Carson, a white sculptor who made the bust in Oakland, started a GoFundMe to pay for repairs and reinforce it with bronze. The fundraising campaign raised $1,040 of a $5,000 goal as of Sunday. In the post, he promised that excess money will be given to Taylor’s family.

“At first I was stunned and shocked and hurt and angry,” he told KGO. “Just a whole flood of emotions. It felt like I was personally attacked and also they attacked Breonna Taylor and the BLM movement.”