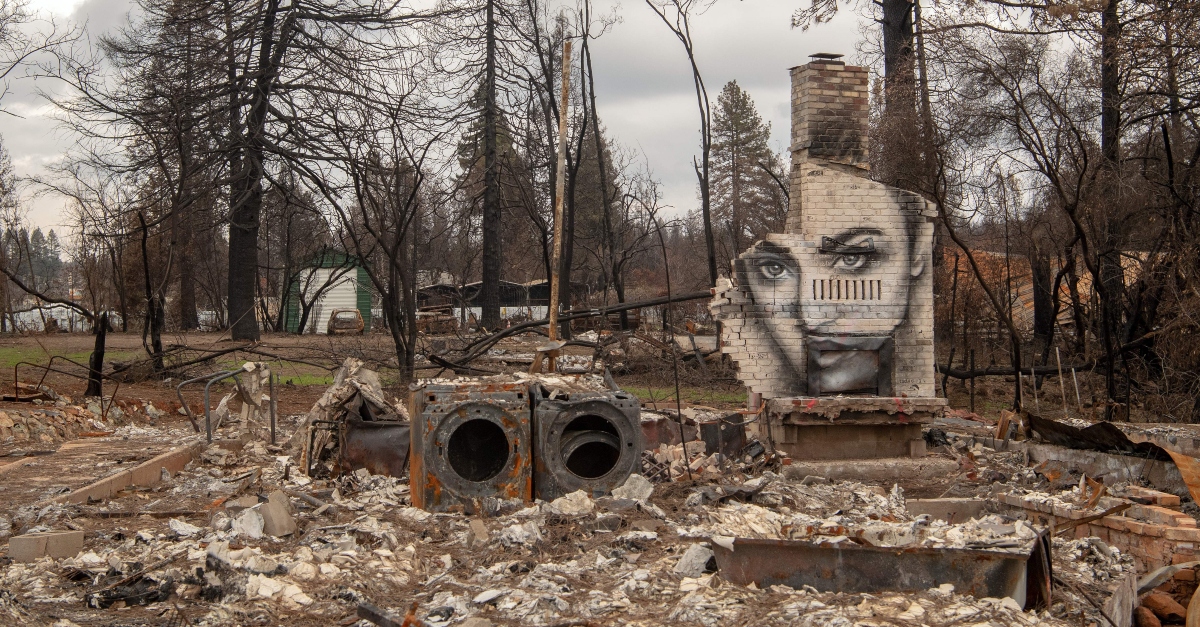 Mural painted by Shane Grammar on a chimney at property burned by the Camp Fire in Paradise, California

Power company PG&E has announced that it will plead guilty to 84 counts of voluntary manslaughter and one count of unlawfully starting a fire in connection with the 2018 California “Camp Fire.” That’s according to a Securities and Exchange Commission filing obtained by The Sacramento Bee. The move is part of a plea agreement with the Butte County District Attorney’s Office. Under the terms, PG&E would pay a fine of about $4 million (the maximum amount). They also said they will fund work intended to return water access for the next five years to people affected by the destruction of the Miocene Canal.

85 people died in the died in the devastating Camp Fire in Butte County, California. (The original death toll was 86, but that number was revised down to 85.) Authorities blame the incident on PG&E. On Nov. 8, 2018, a wire reportedly snapped on the Caribou-Palermo power line near the town of Paradise in northern California. The resulting fallout started a fire that destroyed the town and the community of Concow. A total of 11,000 homes were destroyed and almost 50,000 people were displaced, according to NPR.

PG&E was already under legal pressure at the time of the Camp Fire. The company was on probation in connection to a 2010 natural gas pipeline explosion in San Bruno and was dealing with possible liability in the 2017 wine country wildfires (PG&E ended up cleared of criminal liability in that matter).

Now, the top person at the power company says the company acceptts responsibility for the 2018 fire.

“On November 8, 2018, the Camp Fire destroyed the towns of Paradise and Concow, impacted Magalia and other parts of Butte County and took the lives of more than 80 people,” chief executive Bill Johnson said in a statement reported by the Bee. “Thousands lost their homes and businesses. Many others were forced to evacuate and leave their lives behind. Our equipment started the fire. Those are the facts, and with this plea agreement we accept responsibility for our role in the fire.”

It’s unclear why there were 84 counts of involuntary manslaughter, and not 85, which would reflect the death toll. Butte County prosecutors did not immediately respond to a Law&Crime request for comment.