The video shows at least seven police cruisers chasing the RV down a highway.  The driver eventually exited the freeway, passed a Waffle House, ran through several red traffic lights, and slithered between other drivers — including a tractor trailer — all while evading the increasing number of law enforcement officers who remained in hot pursuit.  The police narrowly closed in on the RV several times but were ultimately brushed aside time and time again by the much bigger vehicle they were trying to catch.

The RV traveled with punctured tires during part of pursuit. It eventually continued on just its rims. 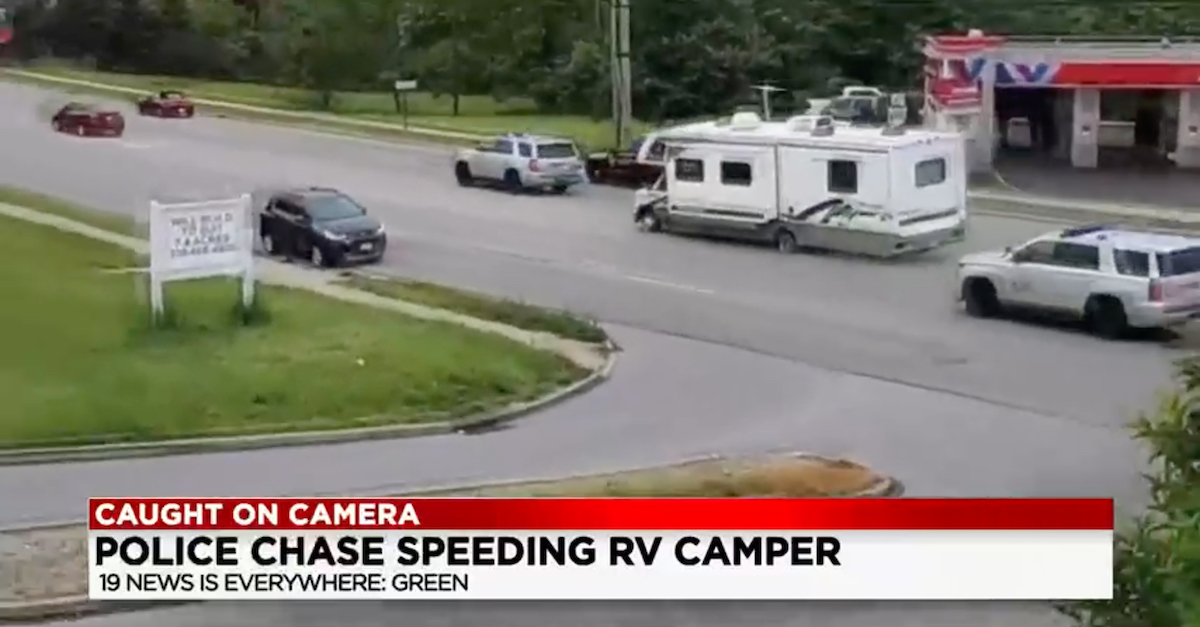 This screengrab from WOIO-TV shows the chase as it was recorded by a witness. The relative size of the RV when compared with the pursuing police SUVs explains why several PIT maneuvers failed to control the chase.

The chase proceeded through a commercial district and eventually onto residential streets. It eventually entered a suburban-style housing development. There, the RV driver turned off the road altogether as its driver led the responding officers through front yards, back yards, and side lawns. The rodeo-like atmosphere depicted in the dash cam recording showed the RV and the pursuing patrolmen weaving through trees, around sheds, between houses and garages, and traveling up and down small knolls and hills.

Several who subsequently saw the footage were aghast at the thought that innocent victims could have been struck by the tangled pursuit.

Being both a father and a grandfather, I have but one comment/question: were residents warned to stay indoors while the chase was on? I am just imagining a child running towards the back of his house at the same time the patrol car sped by the lawn. #BlueLivesMatter #BacktheBlue

When they turned that one corner in the development, I bout had a heart attack! Thought it was a child but was a stand up mailbox.

Local news reports later indicated that a woman who was spreading mulch was, indeed, almost struck near the end of the chase.

Officers attempted to perform several pursuit intervention techniques — or “PIT” maneuvers — on the RV. One of those maneuvers ripped the rear panel off of the fleeing vehicle.

Eventually, a PIT maneuver appeared to shove the RV off course after the chase re-entered a residential road.  The driver turned toward a bank between two homes and made it a few more yards into a backyard.  Officers surrounded the vehicle as it came to rest near a thicket of trees and bushes.

Just before the dash cam recording ended, officers could be heard ordering the driver to get his hands behind his back, threatening to tase the driver, and otherwise commanding him to “stop resisting.”

When it all ended, no one was reportedly hurt.

The pursuit began when the Summit County Sheriff’s Office was called to investigate a report that a man was breaking into vehicles, Cleveland FOX affiliate WJW reported. A responding officer saw an RV quickly flee the scene with its pop-outs extended and a cord dangling from the vehicle — suggesting it wasn’t ready to be driven by its normal owner.

Stop sticks didn’t stop the RV.  Nor did the officers catch the driver alone once the vehicle came to rest.  A police canine chased the suspect down after he fled a short distance on foot, WJW reported.

“The reason that we continued to try to apprehend this person is because of the imminent danger to the public and, thankfully at the end, we were able to successfully apprehend him,” Summit County Sheriff’s Office Inspector Bill Holland told WJW. “Had we not, how do you know what could have happened?”

The suspect, Randy H. Schiffbauer, 24, was booked on preliminary charges of “robbery, felonious assault with a weapon, willful fleeing, assault on a police officer, and possibly other offenses,” Holland told the Akron, Ohio Beacon Journal.

Several television stations noted that this wasn’t the first time Schiffbauer led Akron, Ohio-area police officers on a bizarre chase. A few years ago, Schiffbauer was accused of taking a bulldozer on a tumultuous ride through the area — severely damaging a home and several cars in the process.