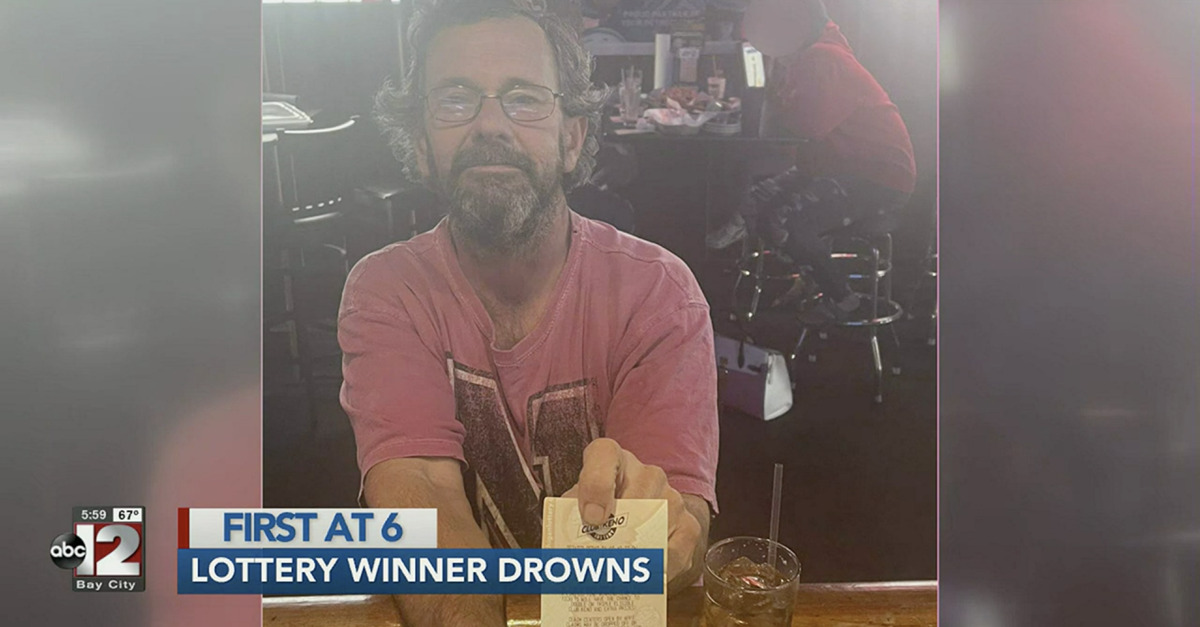 A Michigan man won the lottery earlier this month but tragically died before he could cash in — with the winning ticket still in his pocket.

On the morning of Sept. 24, the body of 57-year-old Gregory Jarvis was found on a private beach that makes up part of Saginaw Bay.

Jarvis was certainly at the inn on Sept. 13 when he played the Michigan Lottery game Club Keno, a draw-style game wherein a player wagers an amount between $1 and $20 (specifically choosing a bet of: $1, $2, $3, $4, $5, $10, or $20) while selecting up to 10 numbers out of 80. Winnings are contingent on how many numbers, called “spots,” are selected and the amount of the wager made by a player.

There are also various add-on games that can be played within the confines of Club Keno. These games cost extra money and increase a player’s winning potential. Jarvis played one such game, called The Jack, which gives players “a chance to win the progressive jackpot or other prizes,” according to the Wolverine State lottery’s website.

Club Keno numbers are drawn “every few minutes” from six in the morning until just before two in the morning, the lottery notes, with a jackpot size that frequently increases apace over time.

Jarvis hit the jackpot at a high point. He won $45,000 by matching eight of eight spots. Talaski remembers the winning call well.

“Somebody said someone just won ‘The Jack,’ and he said, ‘great,'” the inn owner told the television station. “Someone asked him ‘was it you,’ and it was, so he was super excited.”

But the big winner was bedeviled by the bureaucratic fine print.

By the 19th of September, Jarvis had yet to cash the ticket but was still in good spirits, Talaski told the outlet. He had returned to the Blue Water and was buying rounds of drinks, which, according to the Associated Press, were for his friends at the bar — seemingly a good-natured effort to pre-spend some of the prize money.

“He couldn’t cash it because he didn’t have a social security card at all, it wasn’t any good, so he applied for a new one,” Talaski said.

That night at the inn was the last time anyone is believed to have seen Jarvis alive. After a week of no news, Talaski started to worry.

“Sometimes he’s up north working, he wasn’t here all week and we thought, something is wrong,” she told the local news station.

The next Wednesday, Jarvis’s boss came into the bar and said the lottery winner hadn’t shown up for work that week. Two days later, a resident on the private beach reported to police that a body had washed up alongside a boat. The boat belonged to Jarvis.

“We are thinking that he was tying up his boat, slipped and fell, hit his head, and that’s where he ended up in the water, no foul play suspected,” Caseville Police Chief Kyle Romzek told the AP.

“It did, at first,” Romzek confirmed, “we were concerned about it but after the autopsy, and we interviewed people at the bar, he was well-liked around here, he was nice guy, that took it off the table.”

Jarvis’s relatives are now in possession of the winning ticket.