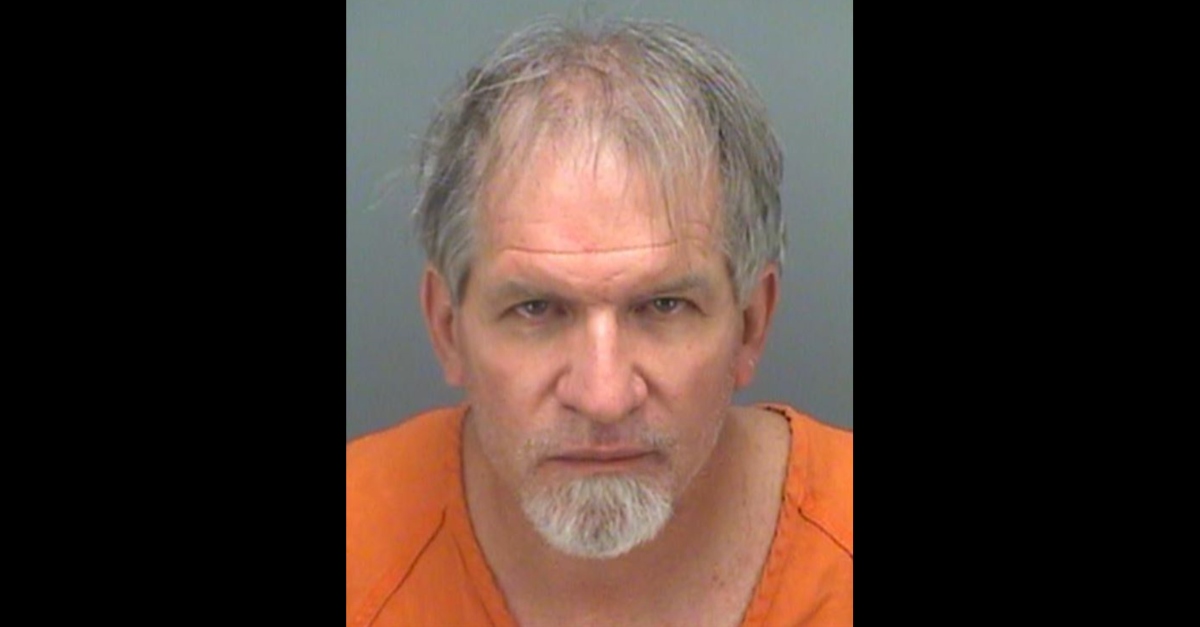 A man in Pinellas County, Florida tried to pick fights with Trump supporters at a political rally, and struck a sheriff’s lieutenant, according to an allegation from the local sheriff’s office.

Scott Lee Rexroat, 59, was booked into jail on Sunday, records viewed by Law&Crime show. Video also reportedly showed that the defendant was struck multiple times by a law enforcement official during his arrest.

Deputies say the defendant was wearing a rebel flag, a “Trump mask,” and a carrying sign featuring swastikas, according to the arrest affidavit. But Rexroat was not a Donald Trump supporter, authorities said. He was allegedly starting confrontations. Investigators claim he approached actual supporters, called them Nazis, and got photos with them “insinuating he was with them and they were all Nazi supporters.” Investigators said this almost started several fights because the Trump supporters were pushing Rexroat out of their faces.

That’s not the only thing Rexroat is in trouble for. According to the affidavit, a sheriff’s lieutenant tried to pull the defendant away from other people, but the defendant hit this lieutenant in the arm. Rexroat also allegedly hit the official with his shoulder. Deputies pointed out that the official had a sheriff’s office uniform, including the “star, insignia, and gunbelt.”

“This case is open and active and we are looking into it,” Pinellas Sheriff’s deputy Travis J. Sibley told Law&Crime in an email. He said that they cannot provide comment while the case remains open.

Video posted to Facebook showed the arrest, according to WMNF.

No one deserves this treatment at the hands of law enforcement. And Sheriff Gualtieri says there’s no police brutality in Pinellas County. This happened today to an older man who was protesting Trump in Palm Harbor, FL. Time to vote for a new sheriff! pic.twitter.com/1sW6HH5DVb

WMNF, a local radio station, described this as showing Rexroat’s arrest. They said was a protester against President Trump. As seen in a picture, he was wearing a Confederate flag, and a mask of POTUS placed on top of a face shield. He had a sign that read, “Disabled bone spurs. Will work 4 fools!” Another picture showed him hold a sign that stated, “Radical bone spurs.”

All told, the defendant is charged with battery on a law enforcement officer (a felony), and a disorderly conduct (a misdemeanor). Records show no attorney of record. He was scheduled for an advisory hearing to take place 1:30 p.m. ET. Rexroat remains at the Pinellas County Jail in lieu of posting a $2,750. If convicted of the more serious charge, he faces up to five years in prison.