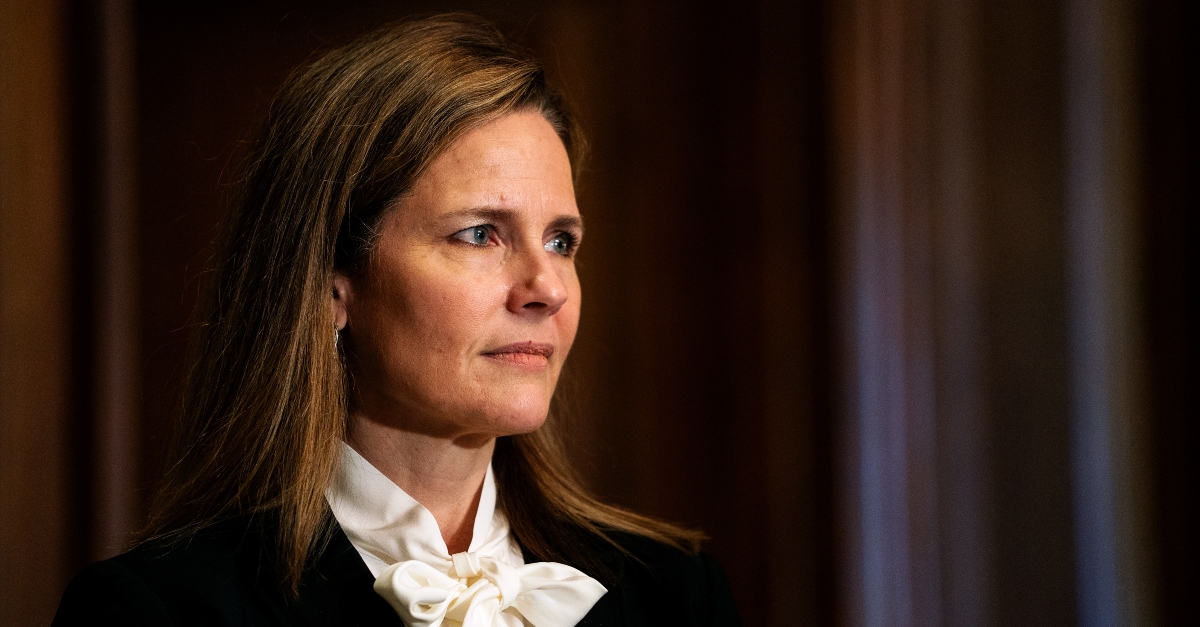 U.S. Supreme Court Justice Amy Coney Barrett appeared skeptical of too much Freedom of Information Act (FOIA) sunlight during her first stab at oral arguments in an environmental law case heard on Monday.

Stylized as U.S. Fish and Wildlife Service v. Sierra Club, the dispute concerns whether internal decision-making documents are part of a formal process under the Endangered Species Act and therefore able to be accessed by the public.

The Sierra Club previously submitted a FOIA request for records relevant to years-old rulemaking done by the Environmental Protection Agency (EPA) concerning the regulation of cooling water intake structures that are harmful to endangered marine animals. The EPA denied the request but the Sierra Club sued and won in both district and appellate court. The government, which began opposing the public access effort during the Barack Obama administration and which continues to oppose public access under President Donald Trump, appealed up to the nation’s high court.

The Sierra Club believes the documents are obtainable under FOIA because they reflect “formal or informal policy on how [the agency] carries out its responsibilities.” The government says the documents are not obtainable because they constitute a protected “draft” under FOIA Exemption 5‘s “deliberate process privilege,” which typically shields internal agency deliberations from public view.

The American Civil Liberties Union (ACLU), which filed an amicus brief in the dispute, says the case “presents an important opportunity for the Supreme Court to affirm the American public’s right of access to documents outlining government procedures under FOIA and [to] limit the scope for which the government can claim the deliberative process privilege to keep documents secret.”

While questioning the government’s attorney, Barrrett leaned toward an appreciation of government trust and secrecy. Picking up on a line of questioning initiated by Justice Brett Kavanaugh, the newly-minted justice suggested a preference for a “bright-line” test or rule that would allow administrative agencies considerable leeway in self-determining whether or not a document actually qualifies as an unobtainable draft.

Here, according to the Sierra Club, the analysis within the so-called “draft” was complete–meaning the document in question was a draft in name only. Additionally, Sierra Club Managing Attorney Sanjay Narayan noted, the document itself was emailed to the EPA and made widely available throughout the agency which led to specific legal actions being made based on the analysis contained in the alleged “draft.”

Politico’s senior legal affairs correspondent Josh Gerstein felt that Barrett’s questioning was “pretty unfriendly” toward FOIA. He argued that favoring such a bright-line rule would likely let any agency “withhold any document stamped draft regardless of underlying facts.”

During her questioning, Barrett also appeared hostile to what she termed a “fact-intensive determination” that would rely on “other factors” beyond the confines of a bright-line rule that would make things easier for courts to handle.

“Or do you not want a line that is that bright?” Barrett asked the solicitor general’s attorney at one point–all-but tipping her hand on the issue.

During his time at the digital dais, Narayan was also grilled by Barrett in a way suggesting she was likely to come down on the side of the government in the case.

Narayan previously outlined the Sierra Club’s preferred legal test or framework, arguing that a so-called “draft” should be obtainable by the public when it has “appreciable legal consequences.”

Justices Clarence Thomas, Samuel Alito and Elena Kagan set the stage for disputing that proposed framework. Each of them argued that the government should be trusted and given the benefit of the doubt when it claims a “draft” is a draft. The Sierra Club attorney pushed back against that argument, noting that the burden is actually on the government to prove that a FOIA exemption applies.

Barrett picked up that standard from her colleagues in notable fashion. She took direct issue with the “appreciable legal consequences” idea by revealing a problematic understanding of how administrative law actually works.

“How can a draft opinion give rise to that legal consequence?” she asked Narayan.

The attorney responded by noting that the relevant legal inquiry is not and should not be whether or not something is labeled a “draft” because the government could simply label any document a “draft” and summarily defeat public access petitions whenever it wanted to if that was the case. This was something that Justice Neil Gorsuch identified as a “problem” in the realm of administrative law.

Narayan responded to Barrett by saying that the court should forget about the internal labeling issue and focus on the analysis contained in the document itself. In the present case, he noted, the agency’s analysis never changed and the so-called “draft” was used to reach an eventual conclusion by other agencies.

Barrett left legal onlookers with the distinct impression that she was reticent to prize the Sierra Club’s arguments in the case.

Notably, liberal Justice Stephen Breyer offered a decidedly pro-FOIA perspective throughout his questioning, pointing out that the so-called “draft” was actually used by the agencies to make decisions. He also gave the appearance of being frustrated and/or pained by the government’s arguments.

Oral arguments wrapped up and the case was submitted on the government’s contention that only a “signed and delivered” document should qualify as a “capital-D Decision” (which is inherently FOIA-able), a position that would leave tens of thousands of agency documents out of public hands per year.