Man Allegedly Murdered His Wife’s Lover, Made Her Decapitate the Body 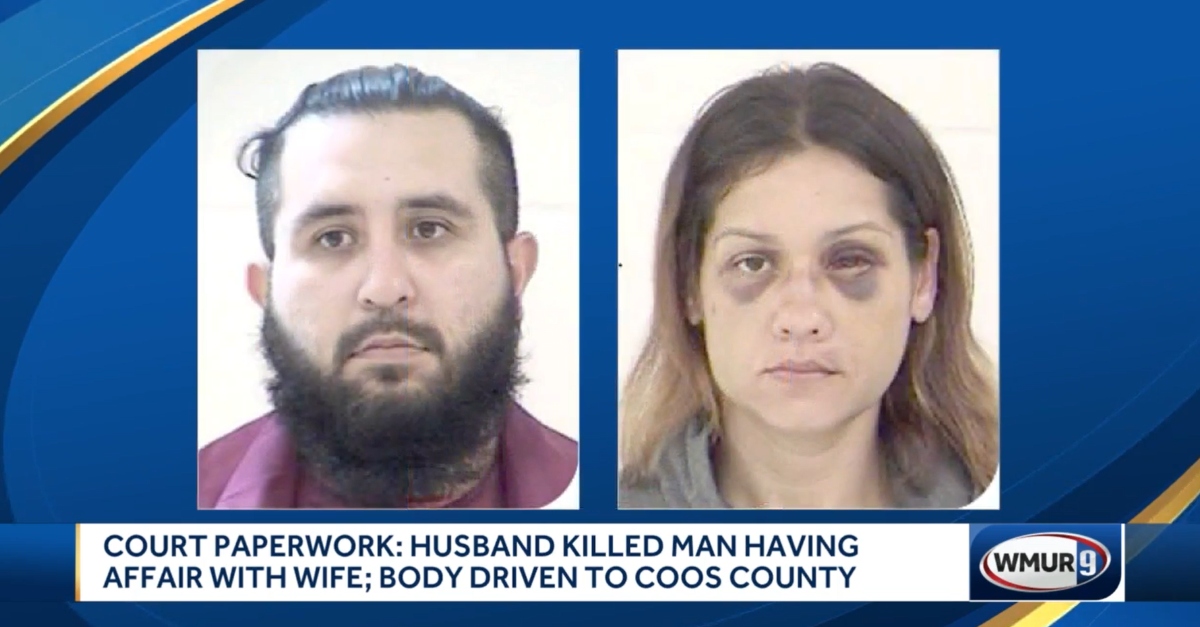 A New Hampshire couple has been charged in the murder of a local man. Armando Barron, 30, allegedly shot and killed Jonathan Amerault, 25, according to police in a Keene Sentinel report. Co-defendant and wife Britany Barron, 31, allegedly said that her husband beat her, and made her decapitate the victim.

Cops said Britany Barron said that Armando Barron searched through her cellphone, and learned she had had a relationship with Amerault. Her husband beat her, resulting in two black eyes and an injured nose, she allegedly said. He also allegedly forced a gun into her mouth, and tried to strangle her in front of their 9-year-old daughter.

The husband allegedly used the wife’s phone to lure the victim to Annett State Park sometime late Saturday on Sept. 19 and early Sunday the 20th. He attacked the man, and told his wife to shoot the victim, according to this story.

Britany Barron allegedly said she did not do as demanded, so her husband took the firearm from her. Armando Barron allegedly made her slit the victim’s wrists, and he shot Amerault—twice in the chest and once in the head. Armando Barron told his wife to cut off the victim’s head in a bid to prevent the remains from being identified through dental records, police said. The body and the head were buried apart. Evidence, including Amerault’s identification, was burned, according to this account.

Both defendants pleaded not guilty in their respective cases. Britany Barron’s attorney puts the blame at her husband’s feet.

“This really started with her being beaten severely,” lawyer Robert Guerriero said in Chesire County Superior Court. “If you look at her face right now … she still has the bruising on her face and around her eyes and it’s described in the affidavit. Armando beat her severely and threatened her. He put a gun in her mouth, an obvious threat to kill her.”

Assistant Attorney General Scott Chase said that Britany Barron was an active participant in the crime, and had plenty of opportunity report what happened. For example, she drove the victim’s car alone for about three and a half hours and had a cellphone.

“She was cooperative after she got caught,” Chase said, according to KSDK.

Both defendants are locked up without bail. Those who knew Amerault voiced shock at news of his death.

“He was just a really good kid and was doing really well for himself,” Amerault’s former high school running coach Mike Wright told the Keene Sentinel. “Not a lot of kids that are 25 [or] 26 years old are buying their own houses.”