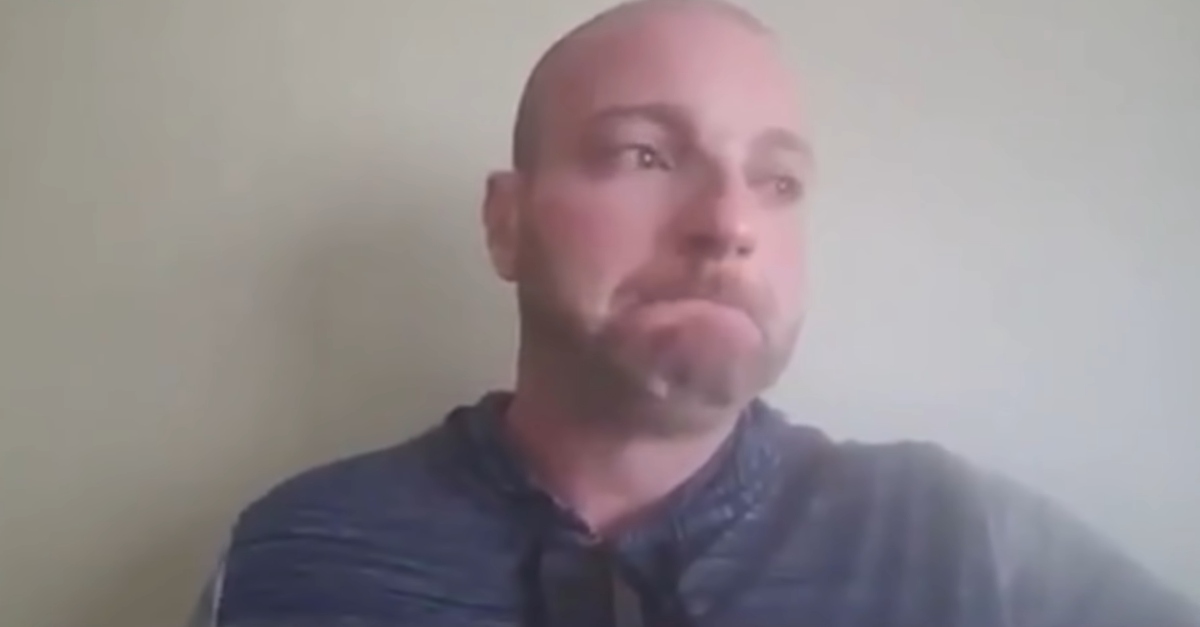 Christopher C. Cantwell, the New Hampshire white supremacist better known as the “Crying Nazi,” was found guilty in federal court on Monday in an extortion and threat case.

“Sending threatening and extortionate messages over the internet can instill fear and emotional damage,” said U.S. Attorney Scott W. Murray of the District of New Hampshire. “I am grateful to the jury for weighing the evidence in this case and finding that this defendant’s disturbing conduct was unlawful. I also want to express my appreciation to the FBI and our other law enforcement partners for their work investigating this case. This conviction should send a message to all those who use the internet as a means to threaten others that their unlawful conduct will not be tolerated.”

The charges stemmed from a feud Cantwell, 39, had with the so-called “Bowl Patrol,” an online white nationalist group, according to The Concord Monitor. The collective trafficked in explicitly violent symbols of white supremacy. The name is a reference to the bowl haircut of Dylann Roof, a racist who shot and killed nine Black churchgoers in 2015 at a church in Charleston, South Carolina. The victim in the Cantwell case, Benjamin Lambert, had an online avatar with a headband reading “KILL JEWS,” according to Cantwell’s defense.

The Bowl Patrol started on good terms with Cantwell, but things fell apart toward the end of 2018.

“I think that many of the members of Bowl Patrol thought that [Cantwell] had shifted his ideology, and so it appeared that he was trying to use his platform to make money and didn’t believe what he was saying,” Lambert testified at trial.

Thus began a feud between Cantwell and Bowl Patrol leader “Vic Mackey” (yes, like the TV character). The defendant wanted to know who this was. According to prosecutors, he demanded the information from the victim.

“So if you don’t want me to come and f*ck your wife in front of your kids, then you should make yourself scarce,” Cantwell wrote on June 16, 2019, prosecutors said. “Give me Vic, it’s your only out.”

The defendant threatened to dox Lambert, and report him to child protective services. He doxed the victim on June 17, 2019, including posting pictures of the victim and his family, according to the government’s account.

— EXCLUSIVE —
The neo-Nazi known as CheddarMane has identified himself as Ben Lambert and gave me the following statement. Lambert is the alleged victim of fellow neo-Nazi Christopher Cantwell. pic.twitter.com/sjLKnseDvA

“I am beginning the process of removing myself from this dark, hateful ideology and poisonous culture completely,” Lambert said in a statement obtained by reporter Hilary Sargent. “This isn’t a change that happens overnight, but I am fully committed to turning the page on this part of my life.”

Cantwell was found guilty of a count each of transmitting extortionate communications, and threatening to injure property or reputation, but was acquitted for cyberstalking, said the DOJ. He is set to be sentenced on January 4, 2021.

Cantwell, a resident of Keene, New Hampshire, was profiled in a 2014 episode of The Colbert Report as being on what the comedy show described as a “crusade” against parking meter attendants. He attained nationwide infamy for his participation in the Unite the Right rally. The event turned violent and deadly.

Cantwell faced a warrant for his arrest. He voiced fear for his life, and broke down crying. In that case, data scientist and social justice activist Emily Gorcenski said that the defendant pepper-sprayed her. Cantwell ultimately pleaded guilty in 2018 to assault and battery, and was kicked out of Virginia. He could not return for five years.

[Screengrab via The Young Turks]