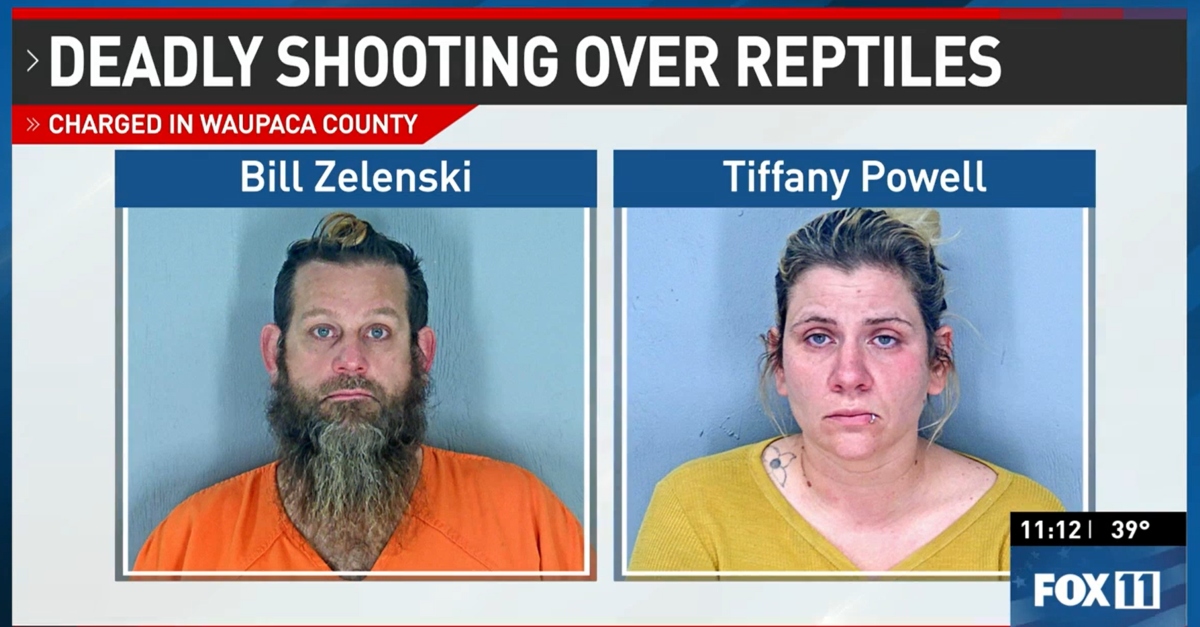 A Wisconsin man allegedly killed an 18-year-old over the theft of some exotic reptiles. Investigators say that William Zelenski, 44, murdered the victim over animals including a lizard, a crocodile, and a python valued at thousands of dollars each, according to WLUK. He has a co-defendant: the victim’s mother, Tiffany Powell, 34.

In the official account, Zelenski had actually called authorities on Monday night to say that two teens burglarized his home, stealing not only guns and alcohol, but exotic reptiles: a $575 boa constrictor, a $2,000 Nile crocodile, $7,000 baby Burmese python, and a $17,000 Mexican beaded lizard.

It is reportedly unclear from the complaint if the shooting itself was caught on tape. Zelenski allegedly told a 911 operator that he had shot the victim in self-defense.

But now he is charged with first-degree intentional homicide. So is Powell, who also faces a count each of first-degree recklessly endangering safety, and possession of a firearm by a convicted felon.

Then there’s a 17-year-old defendant who was accused with the victim of stealing the reptiles. He also allegedly burglarized a building of Zelenski’s after the death of the 18-year-old. Law&Crime is not naming him because it is unclear from court records if he is being charged as an adult.

“I did what I did because I thought my best friend was dying in that house,” he told the court in a hearing for charges including burglary. He apologized for property damage, but the judge told him he should not speak before talking to an attorney.

It is unclear if any of the defendants have lawyers at this time. None are named in online records.

Local animal groomer and businesswoman Crystal Zeske said she has known Zelenski for over a decade, back when he was a Waupaca County sheriff’s deputy.

“I never would have expected anything like this,” she said. “This is totally out of character. He is polite, kind. He’s very kind to animals.” She did mention that the defendant had not been the same since sustaining a major brain injury in a motorcycle crash.

Zeske said that she did not know the victim, but said that Zelenski “took that boy under his wing,” gave him odd jobs, and he was “good friends” with the mother Powell.