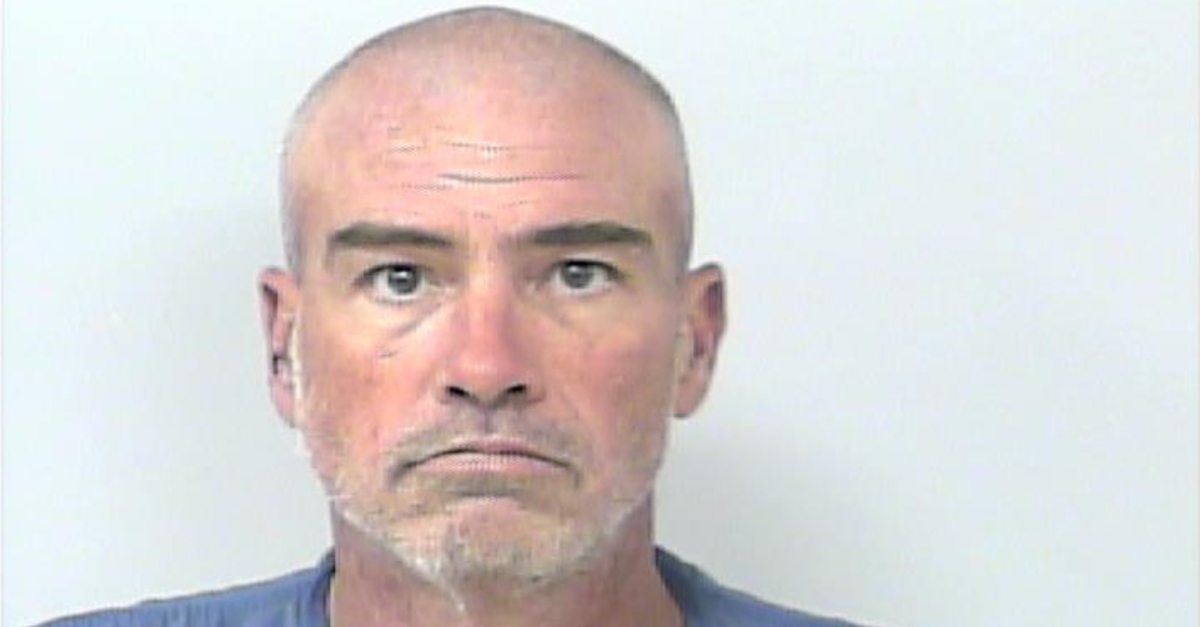 A man is charged with killing his ex-girlfriend’s 95-year-old boyfriend in St. Lucie County, Florida. William E. Hawkins faces a count of first-degree murder and a slew of other charges. Police say he smothered Robert Morrell with a pillow at a nursing home, and confessed to planning the homicide for years.

This is a tangled web, in every sense of the term. According to investigators, Morrell’s girlfriend said she had known him for 14 to 15 years, and moved in with him after leaving her husband. She described this as a happy relationship until he started having health problems last September. A feeding tube was installed.

Well, this was described as an “open relationship.” She said that she also dated Hawkins, the alleged killer, for five months, and hadn’t been with him in four months.

According to authorities, she told the nursing home she did not want him visiting Hawkins. She had a gut instinct that he might do something to the victim. Investigators originally arrested Hawkins for allegedly stealing his ex-girlfriend’s car, and break into his aunt’s shed.

Detectives said the suspect’s estranged sister contacted them, and said she could help in the investigation. According to cops, she said she hadn’t seen him since the summer of 2018, when he asked for money to start a new plumbing business. (She said no.)

She said she had been following the story online, and offered to help: if he’d done the murder, she could get him to confess to her because she was his younger sibling. That’s what happened, police said.

Investigators said they gave her a recording device, and during a jailhouse conversation, Hawkins allegedly told her what he did: he made his way into the nursing home back the employees, and smothered Morrell with a pillow.

According to police, the suspect said he’d been planning the murder for several years, and he claimed that the victim had written a book about him. He allegedly said that the girlfriend “doesn’t know anything,” and revealed he used the woman to get into the condo to be close to Morrell.

“I know every inch of 10 miles around that place, okay?” he allegedly said. “I’ve been stalking the shit out of it.”

Hawkins said that he originally planned to give Morrell a “cocktail” via injection, but the victim was strong for 95 and fought back. (An insulin syringe was found at the scene of the murder, cops said.)

Nonetheless, the suspect allegedly said he felt wonderful at ending the man’s lie.

“I accomplished my life goal, okay?” he said. “Whatever happens to me after that’s fine.”

He compared it to the hypothetical of climbing to the top of Mount Everest after life-long training.

“I fuckin’ busted my nut,” he allegedly said.

Records show Hawkins is represented by the local public defender’s office. Assistant Public Defender Mary Celidonio told Law&Crime in an email that they had no comment.

Note: Updated with a response from the public defender’s office.