GRAPHIC CONTENT: Surveillance video shows a man striking a dog while the owner was away

WARNING: THIS VIDEO SHOWS ANIMAL ABUSE:Ridgecrest police officers are on the lookout for 18-year-old Jesse Ramon after footage of him striking a dog is found on surveillance video. In the video you can see Ramon striking the dog several times and smearing feces onto the dogs face. The dog has been reported as okay.Read more: https://bit.ly/2BiUeWk

The only good thing about the video published on Friday by ABC 23 in Bakersfield, California, is that the suspect shown in it is now under arrest.

The video showed a young man, now identified as 18-year-old Jesse Ramon, yanking a dog around by the neck and repeatedly beating the animal with a belt. Not only that, Ramon is accused of smearing feces in the dog’s face while it was being held down on the ground. The video spread far and wide on Friday and Ramon was arrested by Saturday.

This dog did not belong to Ramon, but to Ethan Greens. As the surveillance video shows, Greens was not present when this assault took place.

The dog, named Bella, is reportedly fine, despite the beating. Greens watched what happened on the surveillance video he recorded and reported Ramon to the Ridgecrest Police Department.

One of Greens’ friends, Marissa Gonzalez, shared the graphic video on Facebook to show “HOW NOT TO DISCIPLINE A DOG” and “what an actual piece of shit is.”

“There is absolutely no reason for a small dog to be lifted off the ground and hit by someone,” she wrote. “This wasn’t him trying to teach Bella a lesson, this was him getting his daily aggression out on an animal and wanting to cause Bella pain. Dogs do have feelings.”

Ramon now faces the charge of felony animal abuse. This is how picture day at the police station turned out: 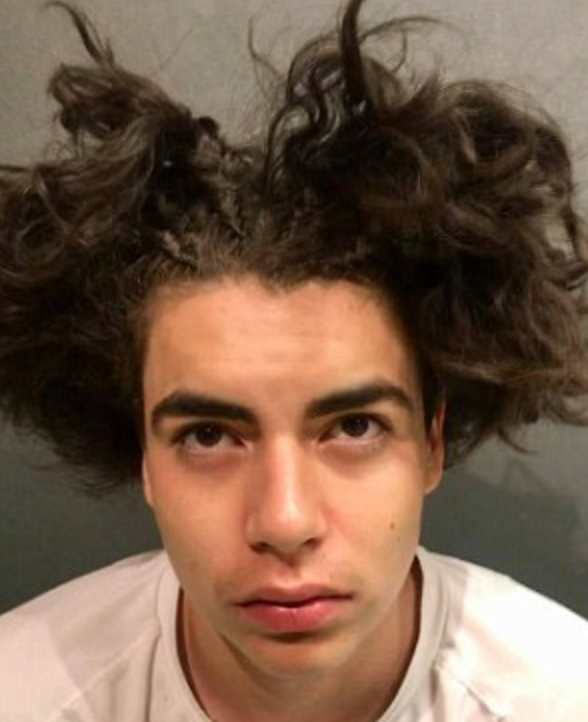