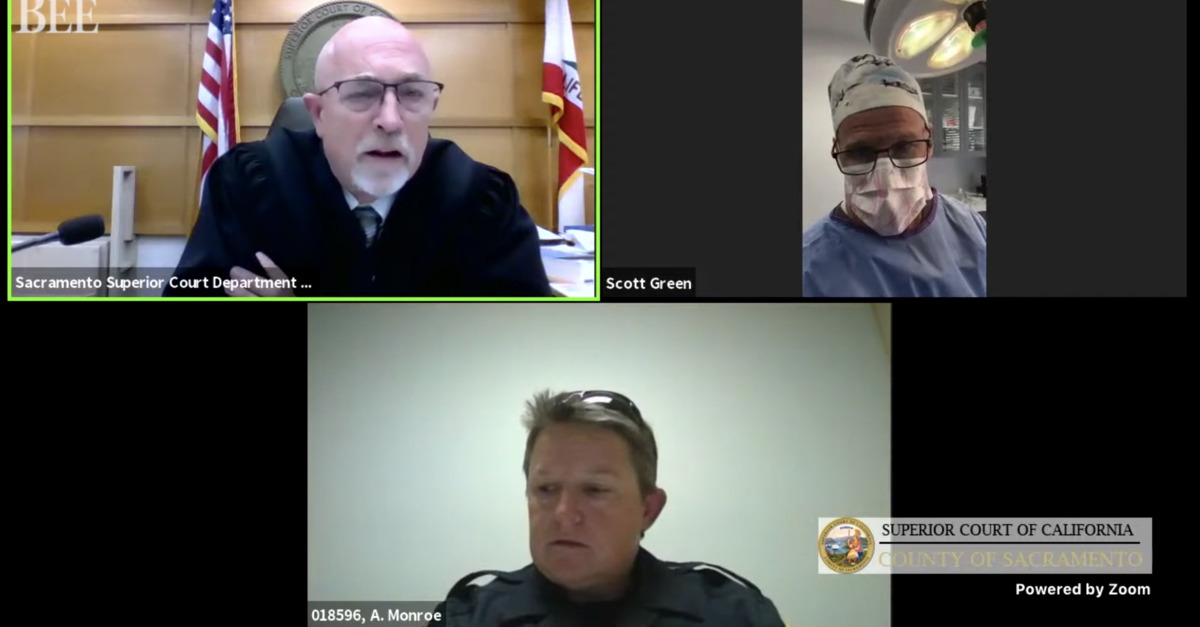 A California doctor made waves during a court appearance on Thursday—live from his operating room.

Plastic surgeon Dr. Scott Green had a traffic issue to deal with and was scheduled for a traffic court videoconference via Zoom due to the coronavirus (COVID-19) pandemic.

According to the Sacramento Bee, Green appeared on screen amidst “the whirs and bleeps of medical machinery, the sounds of suction and the bright glow of surgical lamps” — all to the shock of courtroom staff.

“Hello, Mr. Green? Are you available for trial?” a clerk asked the surgeon. “It kind of looks like you’re in an operating room right now?”

To which Green replied: “I am, sir. Yes, I’m in an operating room right now. I’m available for trial. Go right ahead.”

In the video, which was livestreamed and then posted to YouTube as a matter of course due to the pandemic, the surgeon can be seen wearing blue surgical scrubs and a white face mask. After being advised that traffic court proceedings are public and that the video itself will be public, Green assents and is sworn in.

While waiting for the court commissioner to enter the courtroom, he turns his head down to concentrate on his patient—briefly visible in the video—and turns the camera to face one of his colleagues for a moment. It’s unclear if the surgery actually commences in earnest.

Sacramento Superior Court Commissioner Gary Link quickly tried to make some sense out of the apparently novel and surprising scene in his digital courtroom at the Carol Miller Justice Center.

“So, unless I’m mistaken, I’m seeing a defendant that’s in the middle of an operating room appearing to be actively engaged in providing services to a patient,” the court commissioner asks. “Is that correct, Mr. Green?”

“I do not feel comfortable for the welfare of a patient if you’re in the process of operating on that I would put on a trial notwithstanding the fact the officer is here today,” Link says.

But Green attempts to keep the process intact.

“I have another surgeon right here who’s doing the surgery with me, so I can stand here and allow them to do the surgery also,” the doctor tells the court commissioner.

“Not at all,” Link insists.

Green then apologies, saying that surgery scheduling doesn’t always work out as expected.

The court is receptive to the apology, and the trial date is immediately rescheduled for March 4 at 3 p.m.

“I’m concerned about the welfare of the patient based on what I’m seeing,” Link says just before excusing the doctor and the traffic cop.

The decidedly bizarre attempt to multitask is now being reviewed by the Golden State’s medical licensing and ethics oversight organization.

“The Medical Board of California expects physicians to follow the standard of care when treating their patients,” a spokesperson said in a statement. “The Board is aware of this incident and will be looking into it, as it does with all complaints it receives.”