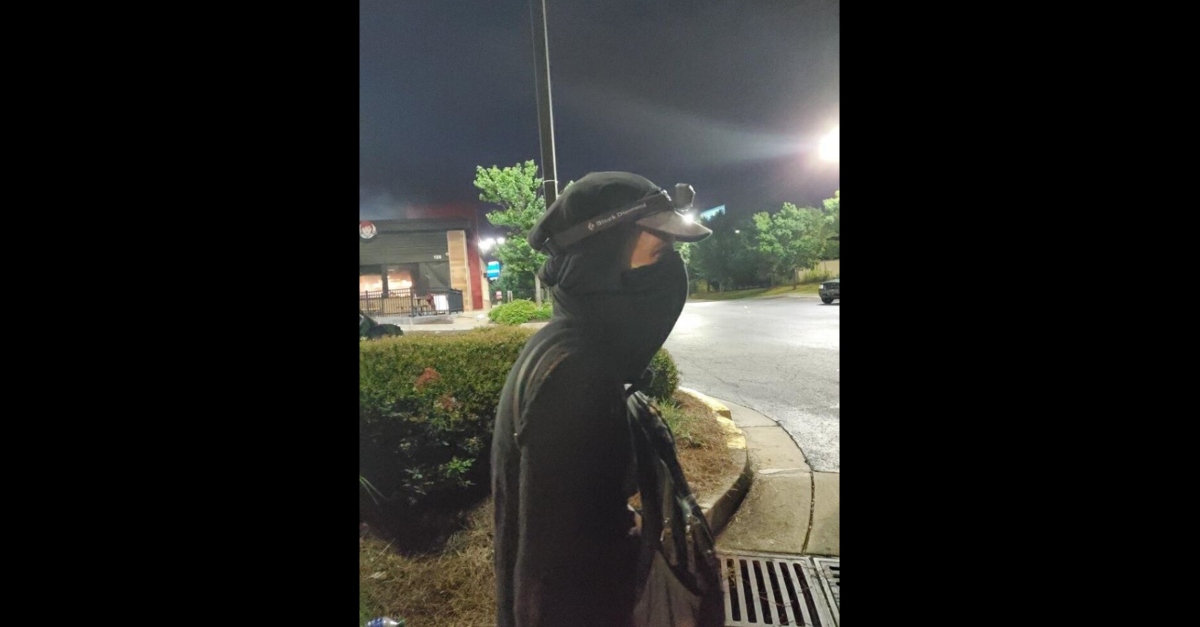 Police in Atlanta, Georgia are seeking a suspect in the arson of the Wendy’s at the center of the Rayshard Brooks case.

Crime Stoppers of Greater Atlanta are offering a $10,000 reward for information leading to the “the arrest and indictment of the individuals [plural]“ who burned down the location, they said. From authorities:

Anyone with information can provide an anonymous tip and be eligible for the reward money by calling 404-577-TIPS (8477) or submitting information online at https://atlantapolicefoundation.org/programs/crime-stoppers/.

They posted photo of a suspect, who they described as a woman. As seen on the images, she appears to be white, though her face is largely obscured with a covering and a baseball cap.

Police also highlighted this video below of a woman appearing to start the fire:

“Look at the white girl trying to burn down a Wendy’s,” said a man in the video. “This wasn’t us. That wasn’t us.”

I had to get this footage cause the media will make it seem like we burned this shit down #AtlantaProtest pic.twitter.com/mGi8kAYqUw

Protests emerged Saturday, the night after police shot and killed Brooks, 27. Officers on late Friday responded to a call that Brooks had been sleeping in his car in the Wendy’s drive-thru. As seen on video, police questioned Brooks on whether he’d had alcohol that night. A breathalyzer test returned a .108 and they attempted to arrest Brooks. Brooks resisted and a struggle ensued on the ground.

The Georgia Bureau of Investigation said Brooks took an officer’s Taser, fled and pointed the Taser at a cop:

Officers pursued Brooks on foot and during the chase, Brooks turned and pointed the Taser at the officer. The officer fired his weapon, striking Brooks.

Brooks died after being shot in the back twice.

The fatal shooting led to immediate fallout for the two officers involved. Garrett Rolfe, the 27-year-old officer who killed Brooks, was fired. Devin Brosnan was place on administrative duty.

Page Pate, a criminal defense lawyer who is unaffiliated with the matter, has argued the charge would be murder.

“The only question is going to be, ‘Was that justified?’” he said on CNN on Sunday. “Was he in reasonable fear that he was about to be killed himself? It is not just, ‘I think this guy may hurt me. I think he may hurt someone else.’ The reasonable fear must be of a ‘risk of death,’ or of ‘serious violent injury to the officer or of someone close by.'”